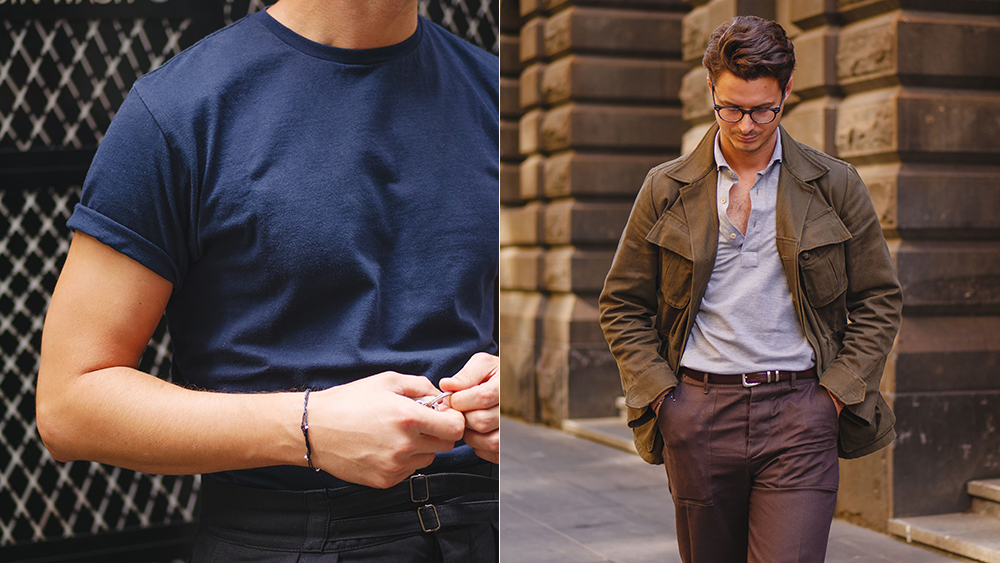 The list of Australian gifts to the world of menswear is not a long one, so it’s always interesting when a brand from Down Under generates some buzz among those in the occasionally snooty worlds of European and American style. Informale is one such brand. Menswear veteran Steve Calder’s relatively new RTW line (launched in 2018) is made up of the sort of pieces that would fit right into any warm-weather wardrobe: linen pants, Gurkha shorts, T-shirts. But what sets the brand apart is the debt it owes to more formal tailoring, a reference Calder makes explicit when he introduces the brand as “tailored casual wear.”

Prior to launching this label, Calder worked for Gucci and Zegna before launching Calder Sartoria in Melbourne in 2016, his own-brand made-to-measure tailors. “Informale isn’t a huge leap away from what I was doing at Calder Sartoria,” he says. “Alongside made-to-measure suits and shirts, I was importing quite a bit of casual wear from Scotland, Japan, Italy, Korea and Hong Kong. Most of what I do comes from my own personal taste and my drive to offer something unique. I don’t think my love for soft Neapolitan handmade tailoring will end: in fact, I still make some suits and shirts on the side for friends and good clients.”

“The initial idea for Informale was simply to make a pair of trousers locally, adding to the mix of tailoring and casualwear that we already had at Calder Sartoria. Turns out it was much harder to find a decent manufacturer than we expected,” he says. “We eventually found a small factory owned and run by a second-generation family of Italian migrants. With our love for Italy and family heritage, my wife Jordana and I got along with them immediately and they’ve really looked after us as a small label.”

Admiration for Informale’s styling has been building: it was stocked at a pop-up shop on Savile Row run by Permanent Style founder and Robb Report contributor, Simon Crompton, for example. And Calder’s reach is growing: Americans, Brits, French and Swedes join Australians in making up the bulk of his clientele. Thanks to Instagram, “we have clients in many different countries, some so obscure I still can’t believe it,” he says. Calder’s account, where he models his designs, has just over 44,000 followers; Informale’s account has north of 27,000.

Informale’s linen T005 trousers wrinkle, like all linen does, but the fabric’s weight means they’ll hold their crease.  MAX KRUSE

Intrigued by his designs and back story, I was keen to try a few pieces. Calder suggested a pair of drawstring linen trousers, a T-shirt and overshirt in a deep navy British moleskin as items that were indicative of the brand. The clothes are very well put together, which was obvious right out of the box. The T005 trousers are cut from a good weight linen (280g), which, ironically—given the name of the brand—gives it a little more body than less formal styles. The design, with four outward-facing pleats and a neat taper, is excellent. The drawstring makes them extremely comfortable: these will get a lot of wear during the summer, whether we’re still locked down at home or roaming free in the wild. And while they wrinkle, like all linen does, the crease stays sharp for longer than you’d imagine (because of the weight) and they’ll look great with a T-shirt or polo and a linen overshirt on top. Very much recommended, particularly in the very wearable khaki colorway.

Calder designed a T-Shirt with a higher neckline when he couldn’t find one that looked suitably sharp under a jacket.  Informale

The T-shirt is based on vintage styles from the 1950s to the ’70s, cut with a slightly higher neck than you may be used to: an idea born when Calder couldn’t find what he considered the perfect fit. “I wasn’t happy with how their necklines sat under a jacket and how the fabric draped on the body,” he says. “I love referencing vintage designs so I looked at army surplus T-shirts from the mid-20th century. The neckline sits cleanly on the body and the length is just long enough to both comfortably tuck-in or leave untucked without hanging too low.”

It’s in a substantial medium weight cotton, and washes well with no color fading so far. An interesting stylistic point is its slightly elongated shoulder line, which you’ll like if you have broad shoulders.

Fans of the shacket will appreciate this three-season layer, cut from a blue moleskin that will look better with age and wear.  Informale

While I’m very taken by both of the above, the star of the samples I tried was what Calder calls the WS50 Workers shirt. Its inspiration, he says, is a factory worker’s shirt from the ’50s, and if you’re a fan of the ‘shackets’ and overshirts that have been a feature of casualwear over the last couple of years, you’ll be right at home with this. Two large chest pockets and a collar that pops nicely are quality design touches, but what really differentiates it is the soft, inky moleskin which I can imagine developing a beautifully worn patina over time. It’s supremely comfortable and an ideal three-season layer. It’s done double duty over a button-down and tie in the office as well as thrown over a white T-shirt and jeans at home. A note on sizing; Steve recommended a medium but that was snug: fine if it was to be left undone but as I wanted the option I sized up. I would recommend following suit.

If you follow Calder on IG you’ll soon notice his signature item, the jungle jacket. Somewhere between a field jacket and safari jacket, it too is based on a vintage design, this time the 2nd pattern Vietnam War jungle jacket made for the U.S. Army. The Informale version retains the abundance of pockets but is long enough and smart enough to cover a suit jacket, should it need to.

Introducing: Our M001 Mask Project. Made in our Melbourne factory using spare cuts of our British Cotton, this project is a threefold initiative during the COVID-19 crisis to help feed Melbourne’s most vulnerable families, keep our seamstresses busy at our local factory and serve you, our amazing clients and friends. The M001 is a double layer expandable cotton mask designed to fit comfortably over the face. It has a bendable wire nose piece, high quality elastic and a pouch for filters. It is machine washable and reusable. Three colours are available: Dark Navy, Olive and Ecru. Our goal is to serve our community and our clients, which means we will not be taking any profits from this project. 100% of the profits of our masks will be donated to Foodbank Victoria. You can read more about our project via the link in my Bio. P.S. Standard Postage is free within Australia

“Made in Melbourne” is at the heart of what Calder is building with Informale, and he’s doing his bit during the pandemic. “At the moment I’m working with our factory on some washable cotton masks using fabric offcuts to keep their seamstresses busy,” he says. But there’s lots more to come, once normal service is resumed: “a pair of epic winter flannel trousers, some ‘enthusiast’ level selvedge jeans and a casual shirt with our Neapolitan shirtmaker” are among the highlights he’s keen to get in front of his clients. We await developments with interest.