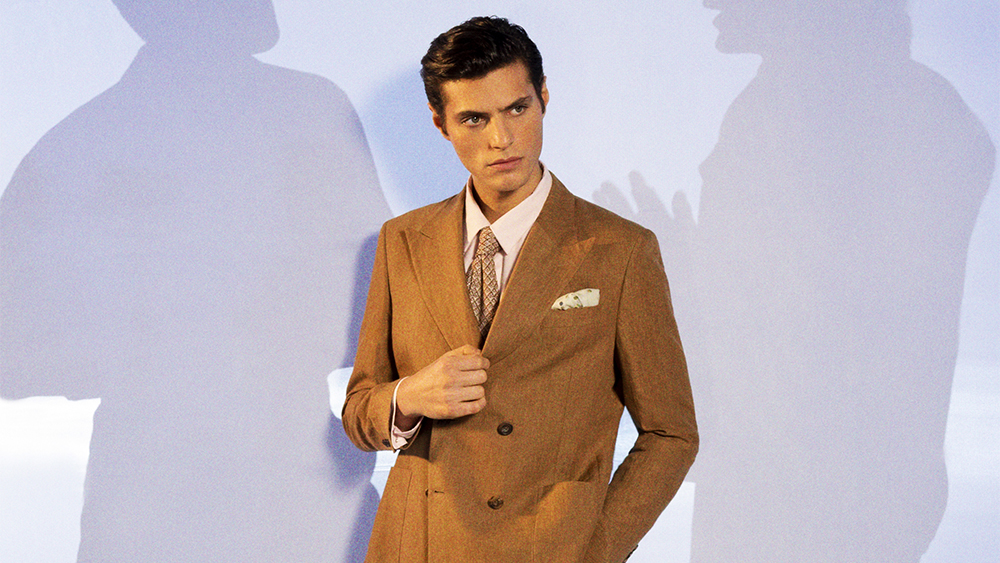 Three decades ago, Richard James landed on the British tailoring scene in a burst of color and energy. The eponymous James and co-founder Sean Dixon opened for business in September 1992 at 37a Savile Row, a tiny shopfront with no running water, halfway down the street from their current residence at number 29.

The premise was simple: The same combination of strong yet flattering English tailoring, sharp ties and crisp shirts that made the Row the epicenter for business-wear, but with an injection of irreverence. Tradition met exuberance in bright cashmere sweaters, rich satin ties, suits and shirts with a dash of pink, lime or mustard in the weave.

The early ’90s downturn in old-school British tailoring gave Richard James an opening. With the famous English and Scottish fabric mills short on work, they were open to small custom orders from an upstart brand hungry to do things with flair. The founders’ Savile Row landlord handed over the keys to a storefront on menswear’s most famous street without even asking for a deposit. Seizing the opportunity, they transformed the space from the typical dark wood and plush curtains. “It was light and airy. We had art in the store, we had windows you could see in,” Dixon remembers. The store quickly attracted a younger and more modern customer—not just law and finance guys, but artists, creatives, actors. “They didn’t want a uniform,” Dixon explains, “They wanted color.”

As British culture experienced a renaissance through the nineties in an explosion of pop music, soccer success, film and art, Richard James dressed its new royalty—Oasis, David Beckham, and Hugh Grant—as well as its old royalty, Prince William and Elton John. As the brand’s 30th anniversary approaches, the electric blues and lime greens of the nineties have joined forces with pastels and the tailoring has softened up around the edges, but the spirit is the same. “We were a disruptor. We came in with a completely new idea, not just in style but also service, how we relate to the customer,” Dixon says. “Now we’re the ‘new establishment,’ but we still want to push things a little bit further than the rest of the Row.”

Today, the new collections don’t quite have the same shock of the new. It’s not that Richard James became less daring but that everyone else started to catch up. Notoriously conservative British men became more comfortable with color, more willing to combine smart and casual. The brand’s most recent spring collection mixes tees and bombers with pleated pants and linen suits in a wide spectrum of dusty pastels. But, it feels less a provocation and more an invitation to relax in style as the heat rises. This is by design: The collection is themed around the Newport Jazz Festival of 1955, and draws its inspiration from mid-century American cool. “It’s a great style reference,” Dixon explains, “because it mixes soft tailoring, polos, tees and knitwear, and it still looks smart and relevant and sexy.”

Texture is king this summer. There are seersucker suits and an innovative seersucker bomber jacket, summer weight needlecord, an abundance of linen shirts and polos in terrycloth and honeycomb stitch. The brand’s signature penchant for color manifests in sun-faded yellows and pinks, paired to the classic summer palette of beige and grey. The boldest move this summer is a focus on double breasted jackets. “We’ve always had one in our collections,” Dixon says. “It’s always very popular with stylists who are dressing celebrities. Double breasted hasn’t quite filtered through to customers yet, but we might be at the breakthrough this season.” Among the plentiful alternatives to the usual summer wools and linen, he singles out the seersucker as a favorite: “It works so well, even in the city. It looks fresh and doesn’t crease. Plus, you wear the jacket or trousers separately.”

As Dixon tells it, Savile Row is beginning to find its feet again after a period of dressing down and staying in. There’s fresh confidence and energy on the street. People want to dress up again, and Richard James wants them to do it in full color.