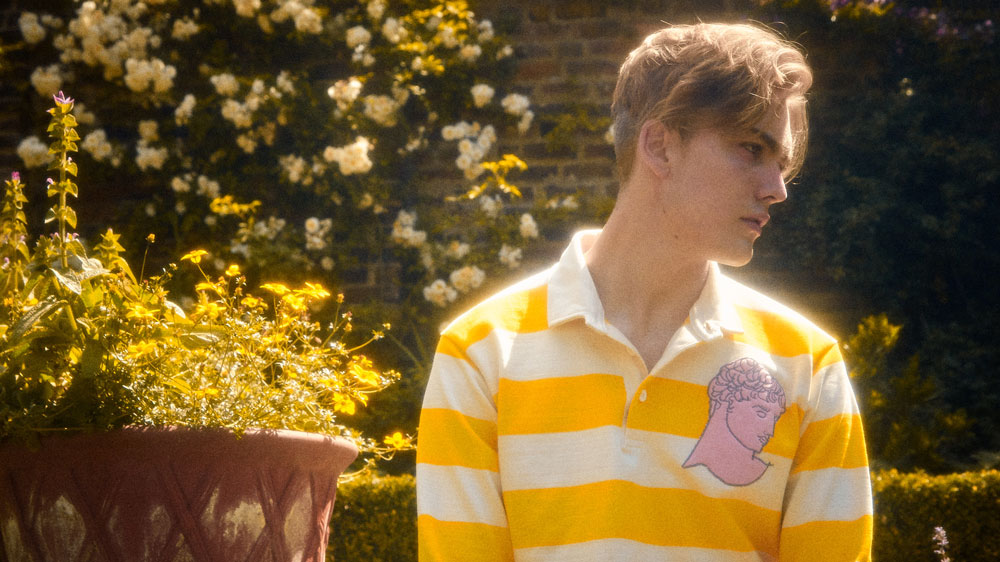 Rowing Blazers has just unveiled a new line of rugby shirts in collaboration with British interior designer and Instagram star, Luke Edward Hall, and you better act fast if you want one because they’re selling out quickly. The new collection blends Rowing Blazers’ founder Jack Carlson’s love of the ancient world—he’s a former archaeologist by trade—and Hall’s similar fascination with classical motifs. The two met back in 2014 when Rowing Blazers was still just the name of a comprehensive tome on rowing attire by Jack Carlson before it became a full-fledged brand. “I was super excited when he launched the brand and what he was doing with color,” says Hall. “Plus, I was excited about the rugby shirts because they remind me of David Hockney.” Hall had purchased Carlson’s book and the two began a friendship on Instagram before they finally met in person at Hall’s studio in London where the idea for the collaboration was born.

“I really like Luke’s palette and the unexpected combinations of colors,” says Carlson. “When we were designing the collection we had a long, long back and forth about color and finding the right color combinations—things like the pink and red stripe rugby or the pink head on the yellow and white striped shirt.” Both of those standout styles, incidentally, are nearly sold out online.

The capsule collection includes a series of five illustrations by Hall featuring motifs from the ancient world including a Greek vase, the mask of Tutankhamun, a disc-thrower, a set of columns in ruin, and a bust statue. Each have been made into colorful patches that adorn five rugby shirts, two sweatshirts, two Oxford shirts, two wool neckties, three corduroy hats, and a set of standalone goldwork patches.

The capsule collection is a full-circle moment for both Carlson and Hall. Carlson, of course, was allowed to revisit his passion for the ancient world, while Hall was able to dip his toes back into menswear. “I did menswear at university so it’s been fun to dive back into that world,” says Hall. “A lot of the stuff I was designing back then were a lot of striped blazers and tweeds.”

The capsule collection ranges in price from $25 for a patch to $185 for a rugby shirt and is available both online and in Rowing Blazer’s New York City pop-up on 161 Grand Street.