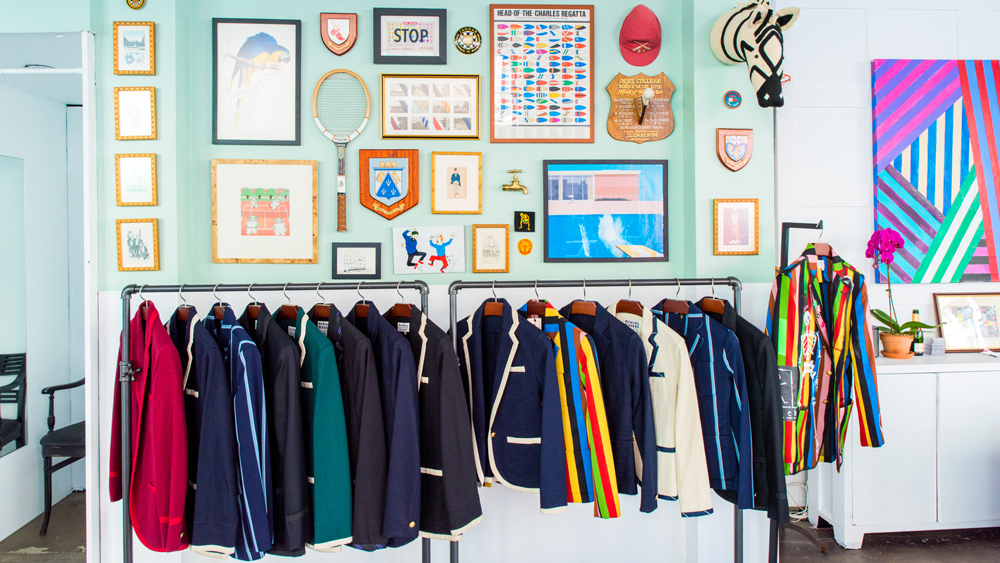 Rowing Blazers, the ultra-preppy line of blazers dedicated to the sport of rowing has been expanding this year. The label just opened its second pop-up shop in SoHo, in a space that formerly belonged to menswear multi-label retailer Odin. Just one year ago, Jack Carlson founded his sartorial line of rowing blazers that pay tribute to the history of the Ivy League sport. Carlson was a rowing team captain at his alma maters, Georgetown and Oxford, and was a member of the U.S. rowing team. He discovered his passion for sportswear when pursuing a career as an archaeologist, he found himself delving into the history of rowing attire on which he eventually published a book.  Earlier this year, he dived into a new sport by releasing a collection of authentic rugby shirts.

The new shop, which features design accents like a mahogany foosball table, ping pong, and a bookcase made from a vintage rowing boat from the ‘30s, feels like a clubby hangout with a hip downtown twist that fuses preppy and urban style. “I knew I wanted to try a store space since we did a pop-up on Rivington Street in New York City in October,” says Carlson. “That went really well, but it was tiny. It was only 300-square-feet and it was only for 12 days. But it was really successful and it changed my mind about having a physical presence. So that’s where the seed started.”

In addition to its own blazers and rugby shirts, the store is also carrying a curated selection of other labels and products from friends of the brand. A selection of Nantucket Red products from famed New England retailer Murray’s to a special collaboration of sportswear from Eric Emanuel, a line of vintage inspired basketball shorts and other sports apparel. “I specialize in sportswear,” said Emanuel, who was helping Carlson set up shop ahead of last night’s opening. “I don’t like sports at all, but I like the apparel that goes along with it. It has the best colorways and sportswear really unites people. So I started making jerseys and all of this baloney, and then I started focusing on basketball shorts because that’s what I always wear and it just took off.”

Another college of Carlson’s, Eric Wind, who is a former watch specialist for Christie’s and the founder of Wind Vintage, was tapped to curate a selection of vintage watches to be sold in the store. “I’ve curated watches priced anywhere from $100 all the way up to $25,000 for a Rolex Explorer,” says Wind. “There’s a wide variety of sports watches, such as Heuer watches with red, white, and blue registers that were used by skippers in the 1970s for yacht racing. And I have other items like a coin watch made by Audemars Piguet from the 1950s. The history and craftsmanship behind these things is amazing.”

Carlson brought in other brands to help fill the space, but says that the curation of other labels also helps tell the story of his own brand. “We had a really good mix of people coming through our first pop-up—everyone from preppy people to guys carrying Supreme bags, for example,” says Carlson. “We try not to do wholesale, because we want to control how the story is told and there’s so much room for that to go wrong, especially as a very young brand. So this is a cool way for us to pick which brands we are sold next to and actually have a brick-and-mortar experience.”