French fashion house Saint Laurent trotted out more than just brand-new clothes on Wednesday evening. The debut of its Spring-Summer 2022 menswear collection in Venice took place within a new installation by artist Doug Aitken. Titled Green Lens (2021), the temporary structure was commissioned by creative director, Anthony Vaccarello, as a venue to present the runway show. The arched, 10-pronged structure has an exterior made of mirrored aluminum panels. Situated on a former military outpost that has been untouched since the 1960s, Aitken’s installation overlooks the Venetian lagoon.

Set next to brick ruins, the installation overlooks a rustic terrain that Aitken said is reminiscent of the settings seen in Andrei Tarkovsky’s dreamy sci-fi films. Inside the kaleidoscopic sculpture, Aitken has constructed a botanic matrix composed of plants indigenous to Venice and the surrounding region. The medley of greenery is surrounded by a pervasive mist.

The ecology theme of the work goes beyond the selection of local vegetation. After the work is uninstalled at the end of the month, the vegetation will be re-planted around the island. “It’s not erected and then disposed of—it kind of seeps back into the earth,” Aitken said in an interview, calling Green Lens a “living artwork.”

Vaccarello told ARTnews that the work relates to Saint Laurent’s new collection because it represents the “desire to look to the future without forgetting the past.” The collection combines Victorian elements and the label’s modern all-black androgynous aesthetic.

It’s not the first time Vaccarello has tapped an artist for such a grand project; Vanessa Beecroft, Daido Moriyama, Helmut Lang, and others have done similar work for the creative director in the past half-decade.

“Those projects are enabling me to work with artists whose vision is similar to mine,” Vacarello said, “but in different fields.” With Saint Laurent, there’s a long history of drawing inspiration from talent in other fields, particularly painters. Long before the Belgian designer joined the house in 2016, the label’s founder, Yves Saint Laurent, paid tribute to artists like Andy Warhol and Piet Mondrian.

Among those who attended the runway show on Wednesday were Kering owner and art collector Francois Pinault, designer Rick Owens and Vogue editor Hamish Bowles. Set to an ethereal soundtrack, the show saw black-clad models circling Aitken’s pavilion, which was tinged rose via lighting effects. 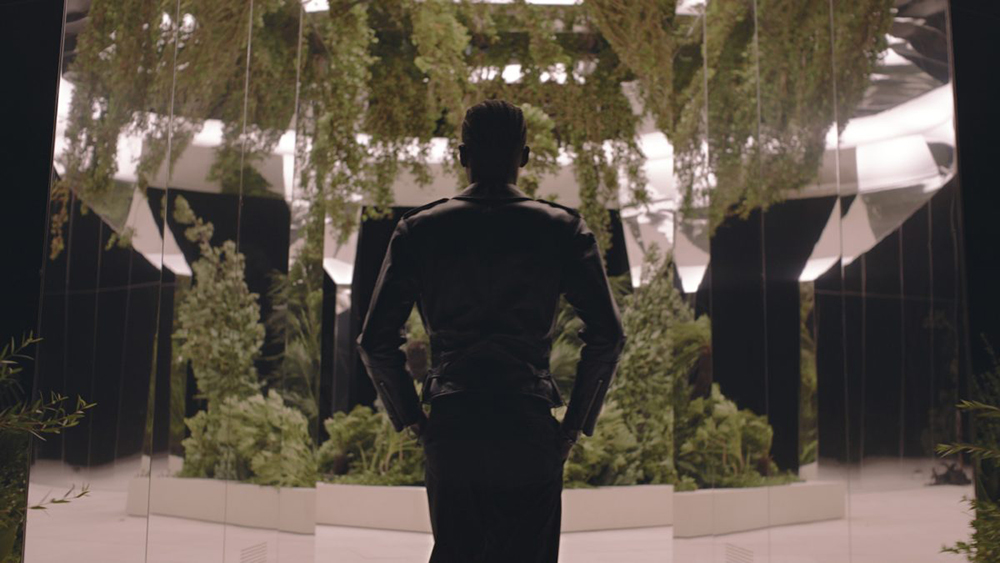 Aitken has gained a following for his large-scale sculptural installations, many of which involve reflective surfaces that draw attention to modern society’s embattled relationship with nature. When scouting locations for the site, Aitken was struck by the site of La Certosa, the little-used island where the Saint Laurent show was held. With an area of 54 acres, the island sits just across the channel from the high-traffic hub where the Venice Biennale takes place.

“Venice has this incredible cultural identity, this cultural capital,” said Aitken, who began work on the project two years ago. “This was kind of a dead site. The architecture fell into ruin.” His goal was to make the defunct space come alive, in an attempt “to leverage a post-Covid dialogue.” Each entry point is left open and accessible with the aim of making a more democratic piece, without hierarchy embedded in the architecture. “It’s something that the viewer can be a part of, the landscape around it can be part of,” said Aitken.

The structure’s reflective exterior, the artist continued, allows the work “to perform itself, in an evergreen way,” turning the surrounding landscape into a series of ongoing encounters with “fictional moments.”

Long an art-world attraction for its biennial series, Venice has recently seen a few important luxury fashion houses—including Rick Owens, who attended the Saint Laurent show, and Valentino, which debuted its couture collection at Venice’s Arsenale the same week—bring their fashion shows to the city, in part, because the pandemic has disrupted the industry’s regular calendar of shows. Saint Laurent’s event was its first in-person event since its last show in Paris in February 2020. The brand announced that it wouldn’t return to Paris Fashion Week this year but would instead set its own schedule of virtual showcases. 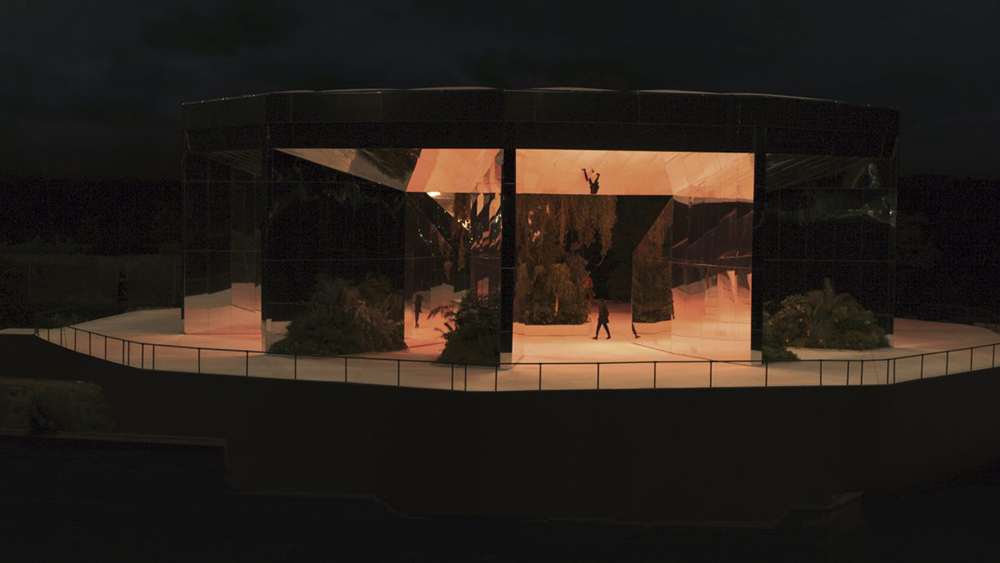 Coinciding with, though not officially a part of, this year’s Venice Architecture Biennale, Aitken’s ecologically minded installation is in keeping with the expo’s long-running focus on future-oriented design. It will remain on view to the public through July 30. It comes as the city continues to grapple with the debilitating effects of climate change. On Wednesday morning, just hours before the Aitken work was unveiled, the Italian government passed a decree banning large cruise ships from entering Venice via the Giudecca canal beginning on August 1. The provision follows a recent report released by UNESCO earlier this month that warned that the city could be at high risk for being placed on the United Nation’s official list of endangered cultural heritage sites.

Aitken seems keenly aware of these circumstances. “Venice is one of the cities in the world where the ocean and land are completely connected,” he remarked. “It’s like a neurological space.” After the pandemic, he continued, there exists greater need for an understanding of “the complete synergy between the land and the ocean—that they’re not distinctly separate things.” 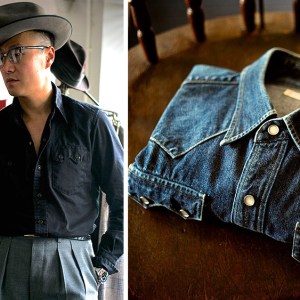 Robb Recommends: Why This Western Shirt Can Make Any Outfit Look Cooler 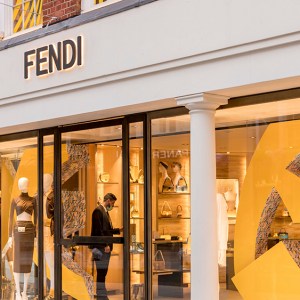 Swimwear 13 Stylish Pairs of Men’s Swimming Trunks for the Beach, Pool and Beyond

Paul Stuart How to Nail Monochrome Dressing, From the Workplace to the Weekend
ad