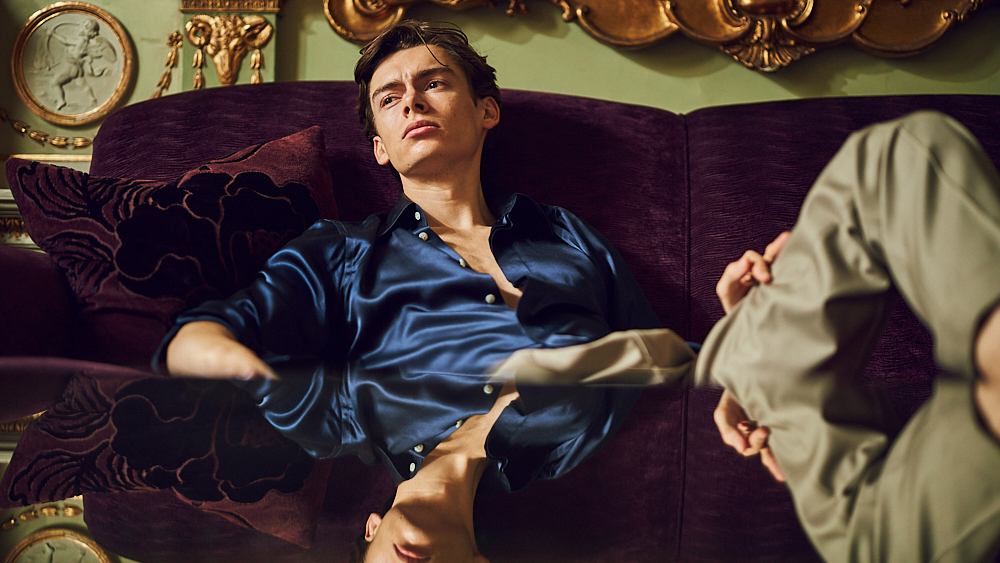 From the ancient Romans to Tang dynasty royals, silk has long been prized as the most precious of all textiles. And yet, for much of modern history, silk has been relegated to the fringes of a man’s wardrobe, turning up as a tie or a pocket square, on the lapel of a tuxedo or blended into a summer suit. For most guys, the thought of wearing pure, 100 percent silk conjures images of Saturday Night Fever–era lounge lizards: more mafioso than Medici. But lately, designers are making a case for reconsidering the material’s many pleasures—and not just for after dark.

That equilibrium is what makes so many of the latest silk garments appealing: They don’t look as opulent as they feel. While most associate the fiber with glossy satin, it can be woven or washed into numerous, more muted fabrications. “It’s an easy fabric to level up any outfit,” says Saks Fifth Avenue’s men’s fashion market manager, Reginald Christian, singling out Giorgio Armani’s matte-silk utility jacket as a prime example of the material’s ability to wear its preciousness lightly. For fall, Loro Piana even used a tightly woven water-resistant silk in a quietly sumptuous down jacket.

Silk shirts are one of the simplest ways to incorporate the material’s low-key finesse, whether with summery camp-collar styles, rakish pajama tops or more traditional spread-collar numbers. “We’ve been making them bespoke for more glamorous clients since the 1970s,” says Edward Sexton’s creative director, Dominic Sebag-Montefiore, of the latter. While they’re great for upping the swagger of a suit, he suggests that wearing one with trousers “makes you look sexy, like you made an effort,” adding: “The rules are changing, and the silk shirt is becoming a staple for giving a sense of occasion without being stuffy.”

Stefano Ricci has specialized in the material since the brand was founded in 1972 with a collection of silk neckties. Today, it operates one of Florence’s oldest silk mills and employs 18th-century hand-loom techniques alongside more innovative knits, incorporating the fiber into T-shirts and technical jogging suits. For those who might be wary of embracing the material’s languid attitude, creative director Filippo Ricci gives the example of one notable client: “Nelson Mandela always wore our silk shirts, and when he went to visit Queen Elizabeth for the first time, he wore a black-paisley shirt.” This, of course, was not standard protocol. “He later told us she said, ‘Nelson, you’re the first person not wearing a jacket in front of me at an official event. But that is a very beautiful shirt.’ ”

For even subtler silk, look to Swedish brand Saman Amel, which champions the material in gauzy knit shirts as well as tailoring. Cofounder Dag Granath explains that the label primarily uses slubby shantung and dupioni weaves for its suiting. “One of the jackets that I wear the most is black silk,” Granath says, noting that he reaches for it year-round, paired with everything from light-wash denim to charcoal trousers. “It doesn’t necessarily have to be evening wear; it can be with notched lapels,” he adds.

In any variation—shirt, sweater or suit—silk makes a garment uniquely pleasant to wear. “It’s a very fine fiber and drapes closer to your body,” Granath says, trying to articulate the material’s singularity. “It just feels special.”