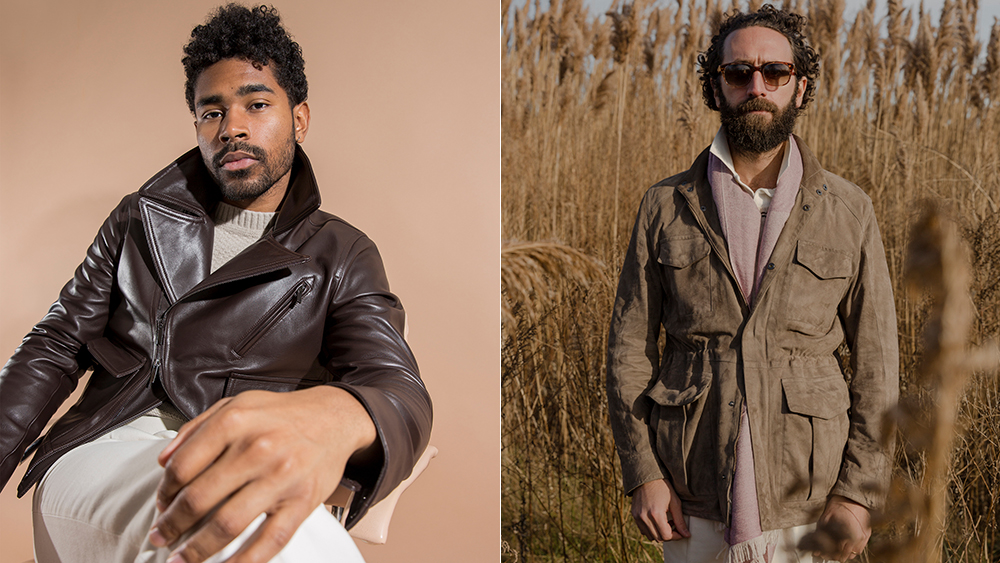 There was a time not long ago when, in order to buy something from the New York made-to-measure operation Stòffa, you’d have to catch its founders Agyesh Madan and Nick Ragosta at one of their trunk shows. But those shows only happened once a month in New York and London (and somewhat less frequently in Paris, Stockholm, San Francisco and Los Angeles), which led to a lot of missed opportunities for founders and customers alike.

Stòffa’s outerwear, available in a variety of fabrics, on display in its new showroom.  Stòffa

But thanks to the five-year-old brand’s recently opened permanent showroom, that shouldn’t happen anymore. In the space, you’ll find spare furnishings—including modular lounge chairs from the designer Mario Milana, who’s appeared in the brand’s campaigns—and a small selection of its total offering. It’s a good pulpit for preaching the gospel that less is more, but with its cream walls and thick carpeting, it’s not quite bully, and that’s the point.

Stòffa can deliver a custom garment in about four weeks, and sometimes less, so you could commission a knit cotton shirt and a pair of linen single-pleat trousers today and still wear them before summer’s over. But the brand’s outerwear, rooted in classic silhouettes and signified by expressive collars and big pockets, is what tends to draw your eye first. There are five options: an asymmetric cut that looks and feels like a motorcycle jacket from the future, a flight jacket that fans of the brand adore, a field jacket, an asymmetric coat and a shirt jacket.

Furniture designer Mario Milana customized these chairs, which you can order here, with some of Stòffa’s fabrics.  Stòffa

“We’re not trying to reinvent the wheel, but we have always been drawn to pieces that feel special and have a little bit of an interesting element to them,” Ragosta said. “So these tall collars are all designed to stand up but also swoop down. Most of them frame the face really beautifully. And the slightly oversized pockets create a visual interest on the jacket, and they’re also quite functional.”

Madan and Ragosta insist on taking your measurements in person when you place your first order, but once you’re in the system, you can re-order online. They don’t change their designs, but for guys who find their standard jacket and trouser blocks too big or too small, they’ll create a custom pattern for a one-time fee: $500 for jackets and $250 for trousers. Depending on the fabric, jackets will set you back between $700 and $2,600, and trousers range from $250 to $425.

Stoffa’s garments are available in wool, cotton, suede or a stiff-looking yet soft-feeling plonge leather, all of which seem chosen with the care you might give to picking a name for a child. With one or two exceptions, the majority of the materials is sourced from Italy, and all of the garments are made there. It makes sense—the co-founders met when they were working on Isaia’s made-to-measure program and saw a hole in the market for guys who were buying MTM suits to wear during the week, but wanted the same service for the clothes they wore on the weekend.

“When it came to suiting, we had the ability to customize what we were making,” Ragosta said. “But when it came to casual clothing, that was a really difficult void to fill. With something like a suede jacket, if it doesn’t fit off the rack, there’s really not that much you can do. We also realized that we weren’t in suits five to six days a week anymore, and most guys weren’t, and things were changing.”

There are only two changing rooms in the space, which helps keep things calm.  Stòffa

They named their young venture after the Italian word for fabric, but stòffa—like no shortage of other words in the language—has a double meaning that feels particularly appropriate here.

“They use it to mean, more than cloth, an intangible sort of genius, or an X factor,” Ragosta said. “I think the closest English phrasing would be ‘the right stuff.”