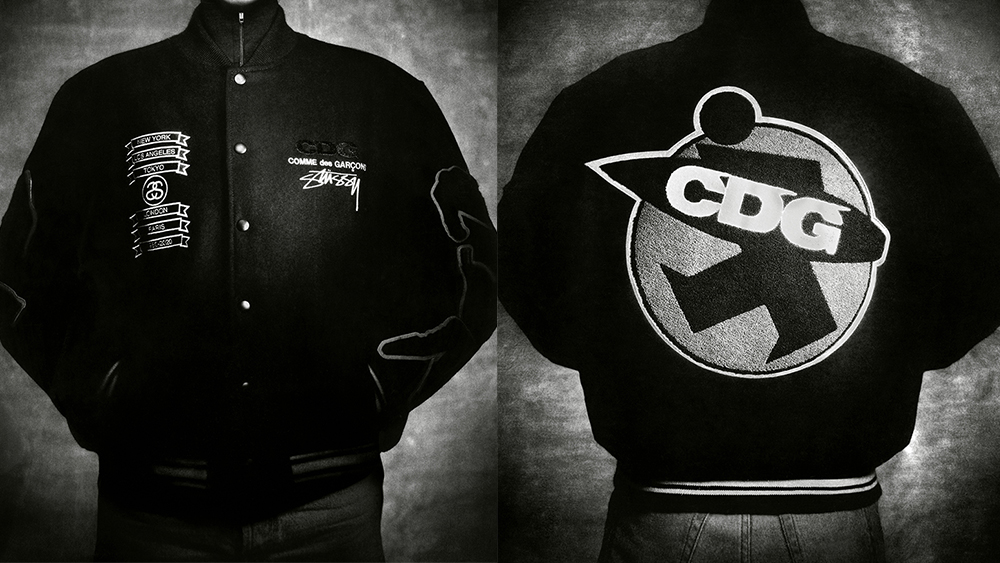 Stüssy is having a moment. Over the last year, it has opened a store in Hong Kong, seen its archive act as the inspiration for a major fashion house and engaged in a string of successful collaborations. Now, to celebrate its 40th anniversary, the iconic California-based streetwear brand is adding to that momentum by collaborating with fellow rebel Rei Kawakubo of Comme des Garçons.

The focus of the duo’s efforts? Stüssy’s signature varsity jacket as seen through a dual lens.

Taking design cues from the classic high school and collegiate staple, this updated version has a melton wool foundation accented with textural chenille patches in the shape of recognizable Comme des Garçons products (we could spot the bottle of its namesake fragrance anywhere). Across the back is a a larger patch in the form of Stüssy’s Surf Guy––the brand originally launched as a purveyor of surf gear––holding a CDG-branded board. A satin lining and simple snap placket round out the oversized piece.

Both companies are known for their off-kilter approach to fashion and insistence on individuality, so the pairing feels like a natural one to celebrate four decades in business. Stüssy had its initial heyday in the ’80s and ’90s, when it grew from a small shop in California to a streetwear megabrand that laid the groundwork for contemporary brands with dedicated and fiercely loyal followings, such as Supreme. Its printed tees became ubiquitous and sartorial shorthand for a certain kind of youthful, skate- and surf-inflected style, which is enjoying renewed popularity.

Though the brand is still in existence, its founder, Shawn Stussy, hasn’t been involved with the brand for some time, having left the label in 1996. However, he remains a revered figure in certain circles of the fashion world. Designers who grew up wearing his clothes and who now find themselves at the helm of major luxury brands, such as Dior’s Kim Jones, welcome the the chance to collaborate with him. Indeed, for the French house’s Pre-Fall 2020 men’s show in Miami, Jones recruited Stussy to create a print in his famous handwriting to be used throughout the collection.