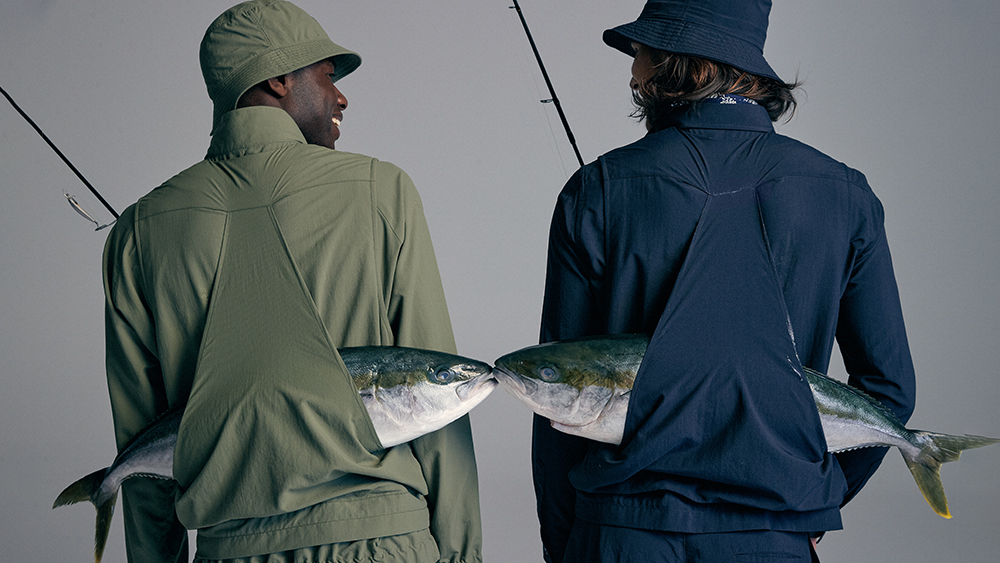 Something’s fishy in the world of menswear. While outdoor-minded heritage brands like Orvis, Filson and L.L. Bean have outfitted fisherman for generations, younger labels that are nominally more downtown than downstream have cast their line with collections inspired by or explicitly designed for the rod and reel.

Examples of the former can be found in the latest L.L. Bean x Todd Snyder collection, which debuted in September with an “Upta Camp” theme that encompassed critter pants embroidered with fly fishing lures and an intarsia-knit trout sweater.

“I think we’re all feeling inspired by the great outdoors, especially after the last year, and fishing is such a quiet, calming experience,” Todd Snyder says of the sport’s current appeal. “I also feel like it’s aspirational—to have time by yourself or with friends and family out on the water is a luxury.”

Perhaps the most aspirational—or practical—piece in the collection is a contemporary redesign of L.L. Bean’s own fishing jacket. “The fishing jacket was originally designed to be a super functional piece that you can wear on the lake or on the river,” Snyder tells Robb Report. “My goal was to reimagine the style for the modern guy who may or may not actually wear it fishing, while keeping those design details that make it authentic and unique.”

At almost the same time, Aussie tailor P. Johnson—which had previously explored sportswear with golf and tennis capsules—rolled out a collection designed specifically for angling with vests, shorts, and quarter zips made from quick-drying Japanese ripstop nylon.

“In Australia, if you were raised next to water, you fished,” says P. Johnson founding partner Thomas Bede Riley, who adds that the collection stemmed from a desire for fishing gear that was both functional and aesthetically pleasing. “I wanted wicking, fresh and breathable gear that was beautiful and pure in its design and had the bare minimum of necessities covered for light shore angling. We wanted to re-establish some sense of the practical elegance in fishing clothing,” he says.

And though P. Johnson’s angling gear is meant to get wet, Bede believes its clean design will carry over to non-fishing wear, too. “The vest dresses beautifully under or over a jacket, and acts as a chic utility vest perfect for traveling. It’s great with jeans, shorts, or chinos, with as little as a t-shirt.”

Similarly, fly fishing advocate and The Optimist author David Coggins sees his recent collaboration with Drake’s as a chance to correct the wrongs of modern-day fishing wear. “Everything looks too technical—as if you’re biking in the Tour de France or trying out for an Olympic luge team,” Coggins tells us. “On the simplest level, I wanted a sport coat made of waxed cotton. Something that was useful that looked good.”

Fittingly, the Drake’s with D. Coggins capsule, which debuted last week, is built around a waxed cotton “fishing blazer” with pleated front pockets large enough to hold a fly box. And aided by photos of vintage fishing jackets and barn coats supplied by Coggins, the design team also brainstormed a waxed cotton fly fishing coat and a fishing vest made from lightweight Japanese military ripstop cotton.

While the offerings do include a less fishing-centric two-pocket work shirt, there’s bound to be some appropriation by style-conscious guys who would never think of picking up a rod. On that question, Coggins is sanguine.

“I’m fine with that. I know photographers who wear fishing vests when they shoot. They love the pockets, and I think that’s great. We all wear clothes that were designed for other uses, especially military clothes,” he says.

And who knows? With enough exposure to handsomely designed gear, even the most fishing agnostic among us may one day find themselves hooked.