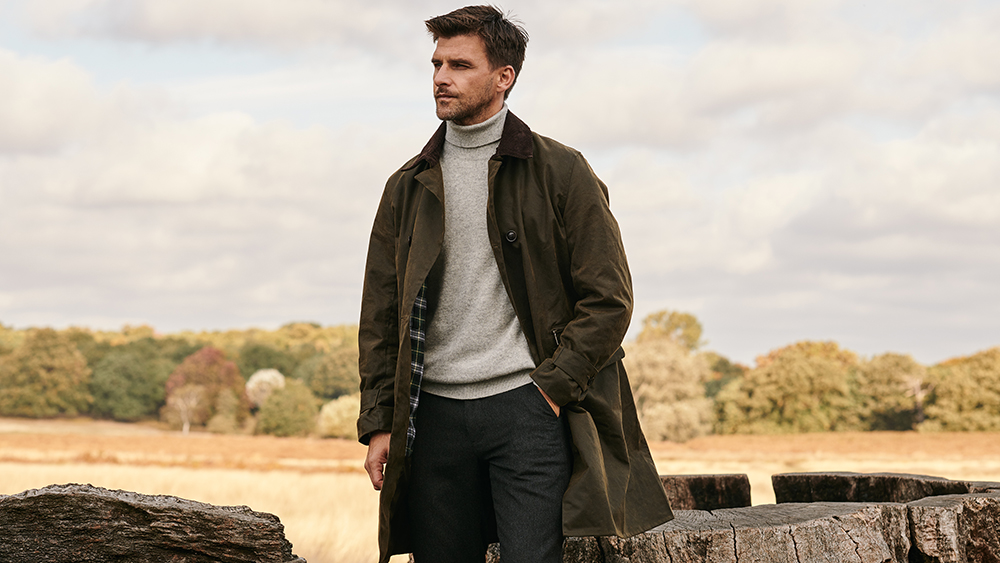 It’s so picturesque that if you close your eyes, you can easily imagine it—or, at least a place quite like it. Galloway, in southern Scotland, is known for its rolling hills and rugged landscape. Long stretches of pasture blanket the countryside. But the region’s defining characteristic is that it’s exceedingly wet. Galloway received an annual rainfall of roughly 55 inches last year (for perspective, that’s just two inches shy of the average in Hawaii, the rainiest state in America). And after living in these conditions, John Barbour learned a thing or two about long-lasting rain gear.

So when Barbour moved to to the bustling port of South Shields, nestled on the River Tyne in northeastern England, he already had an idea or two about how to properly outfit the mariners, fisherman, and other workers in the area. And it wasn’t long after starting to offer his signature clothing in 1894 that Barbour started to make a name for itself.

A jacket from Barbour’s collection honoring Steve McQueen; the actor in a still from the 1963 movie ‘The Great Escape.’  Macy's, Mirisch/United Artists/Kobal/Shutterstock

John Barbour’s chief innovation was a refined answer to the oilskin outerwear worn in the region. Historically, they were crafted from leftover scraps of sails that had been treated with fish oil to make them water-resistant. The trouble with them was that they could smell incredibly bad, so Barbour treated cotton fabric with flax oil. His long silhouettes were sold under the J Barbour & Sons moniker and quickly became a local hit. It went international in 1908, when John’s son Malcolm decided to broaden the scope with a mail-order catalog. Soon, the brand started shipping its wares to places such as far away as Chile and Hong Kong.

In 1936 when Malcolm’s son, Duncan, introduced a line of motorcycle products to sit alongside the existing line of jackets and coats. This included a one-piece suit specifically developed to handle the 1936 International Six Day Trials riding event. Known for its grueling conditions, the race requires that riders wear something that can protect them from the elements, and Barbour’s suit became the market leader for motorcycling clothing after several riders adopted it. The moto range blossomed when Steve McQueen wore one of the brand’s suits in the 1964 Six Days Trial.

But what cemented Barbour’s status as an indispensable style icon involved a certain famous family. In 1974, Barbour received its first Royal Warrant from His Royal Highness Prince Philip, the Duke of Edinburgh. A second Royal Warrant would come eight years later in 1982—this time from the Queen herself. And while a co-sign from a legendary icon like Steven McQueen is certainly great for business, two Royal Warrants in less than a decade put the brand in an entirely new stratosphere.

A year after the second Royal Warrant, Barbour would introduce its most beloved silhouette: the Beaufort jacket. Designed by the then head of the brand (and its leader to this day) Dame Margaret Barbour, the Beaufort quickly became a shorthand for wax jackets writ large. It’s easy to spot on cold, rainy days, instantly recognizable for its studded corduroy collar.

A cover from one of Barbour’s original catalogs next to the brand’s iconic Beaufort jacket.  Barbour

“Primarily designed as a shooting jacket, the style was inspired by her [Dame Margaret’s] visits to France, where shooting jackets tended to have more features and style than was usually the case in the UK,” says Helen Barbour, the brand’s vice chairman, in an email. “The most popular shooting jackets of the era were of shorter length, and in France, had to have the type of full width rear game pocket (called a ‘carnier’ in French.)  She chose the name Beaufort to highlight the continental character of the piece.”

After the late Princess Diana was seen in the Beaufort, sales of the jacket skyrocketed, as women—especially those in the United Kingdom—wanted to look just like the legendary fashion icon. Another Royal Warrant, this time from His Royal Highness the Prince of Wales, would follow in 1987.

“Above all, it is a great honor that our workmanship and enduring quality are recognized by one of the highest authorities in the land,” says Helen. “It also drives us to never let our standards slip.”

That the brand’s products have enjoyed such great longevity is down to their timeless style and function. Jack Carlson, the founder of Rowing Blazers, a New York-based brand that’s challenging what we think about preppy style, found his Beaufort jacket especially helpful when he was still a student.

“As an adult, I lived in Oxford, England, and I coached college rowing while I did my Ph.D.,” Carlson says. “Walking through the mists of Christ Church Meadow and crossing the bridge to Boathouse Island, cycling along the towpath and coaching from a megaphone, or driving the motorboat behind the crews, I was always wearing my Beaufort jacket. The brand has just always been a part of my life.”

It seems that any time Barbour’s popularity might be on the decline, a new generation finds it and falls in love with the craftsmanship of it. A particularly mud-soaked Glastonbury music festival in 2007 led the likes of Lily Allen and Arctic Monkeys to don the beloved wax jackets during their performances—and helped Barbour reach a younger demographic. Carlson believes in the brand’s ability to malleable too. Rowing Blazer’s recent collaboration with the brand generated a split colorway that references both of the beloved colors (navy and hunter green) Barbour is known for. “[It’s] about having fun with the classics, showing that they are, or can be, anything but stuffy.”

From a pure menswear perspective, the brand would once again be put front and center by another British icon: James Bond. In 2012’s Skyfall, Daniel Craig’s Bond ventures to his childhood home before the final confrontation with the film’s villain. There, Bond reaches back to his countryside roots, reaching for a Barbour shooting coat as he takes on intruders in and around his home, Home Alone-style. Skyfall costume designer Jany Temime told GQ last fall that her goal was to create a Bond that “you could really imitate.” She was successful in her goal: a quick Google search yields everything you need to know to purchase the exact jacket Craig wears in the film.

“We have always stayed true to our heritage and my great-great-grandfather’s founding principles of attention to detail, durability and fitness for purpose,” says Helen Barbour when asked about the brand’s longevity and success. It’s something seen easily in Barbour’s latest collection, Icons Re-engineered, which features updates on some of its best-known clothing. “Providing high-quality clothing that is functional, authentic, practical, yet remains relevant to our customers today.”

A heritage brand will always evoke a certain feeling of a time and place. But 125 years after it was founded, Barbour continues to inspire new generations by making products that stay true to its 19th-century roots.  It’s clear that for many, Barbour is one of fashion’s best legacies—a truly generational product that has, and will continue, to stand the test of time.