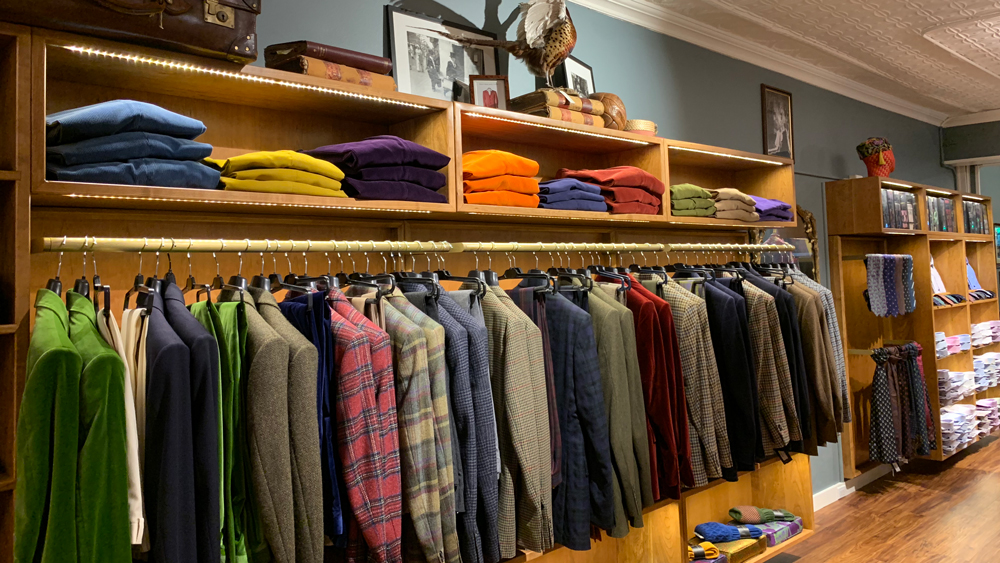 New & Lingwood has established new digs on Lexington Avenue in New York City’s Upper East Side neighborhood. The 153-year-old old British menswear label has famously been outfitting Eton’s collegiate set since its founding. That original outpost in England, just around the corner from Windsor Castle, continues to provide clothing in 140 sporting colors to Eton’s teams, houses, and societies. The clothier eventually expanded and opened its doors to the broader public in 1922 on Jermyn Street, home to some of London’s finest menswear purveyors. Now, thanks to three British expats, the brand has landed stateside at 970 Lexington Avenue.

Alexander Duckworth, Elijah Duckworth-Schachter, and Ray Simpson, venture capitalists of Pop Capital, purchased the brand in 2015 and have been going back and forth between London and New York to build the business for the last three years. “We did the turnaround for Harry Winston and we did a turnaround for Paul Stuart, at the end of which, we all said, ‘This is good, but we should be owning this,’” says Duckworth. The trio realized that a good chunk of their business was coming from the other side of the pond—specifically in zip code 10021. After a successful test run in with a holiday pop-up shop in the neighborhood, they quickly opened up shop. The block is home to a buzzy Upper East Side scene with hotspot restaurants like The East Pole luring in the young and the well-heeled just across the street.

The store carries made-to-measure suits ($2,000-$4,000) and shirts ($295 and up), shoes ($385 and up), and outerwear ($1,500-$3,000) for everyone from the conservative businessman to the sartorial eccentric. A Prince of Wales check blazer, for instance, keeps good company with a bright orange top coat or a forest green velvet blazer.

The top floor, which is hidden by a secret door within the shop, is dedicated to New & Lingwood’s made-to-measure offering as well as its exquisite old-school silk robes. Handmade in England, the robes come in a variety of patterns and start at about $2,000 for the most basic version to up to $4,000 for the robes with padded velvet lapels.

Downstairs, tucked away in the back of the boutique, is a small outdoor garden where guests can kick back during the warmer months with JJ Corry whiskies and cigars from Highclere castle (also known as Downtown Abbey). The space will also be used for dinner parties and events.

If you’re swinging by New & Lingwood in search of a holiday gift, their selection of colorful pocket squares, scarves and ties, as well as an entire wall of socks should provide the perfect gift.