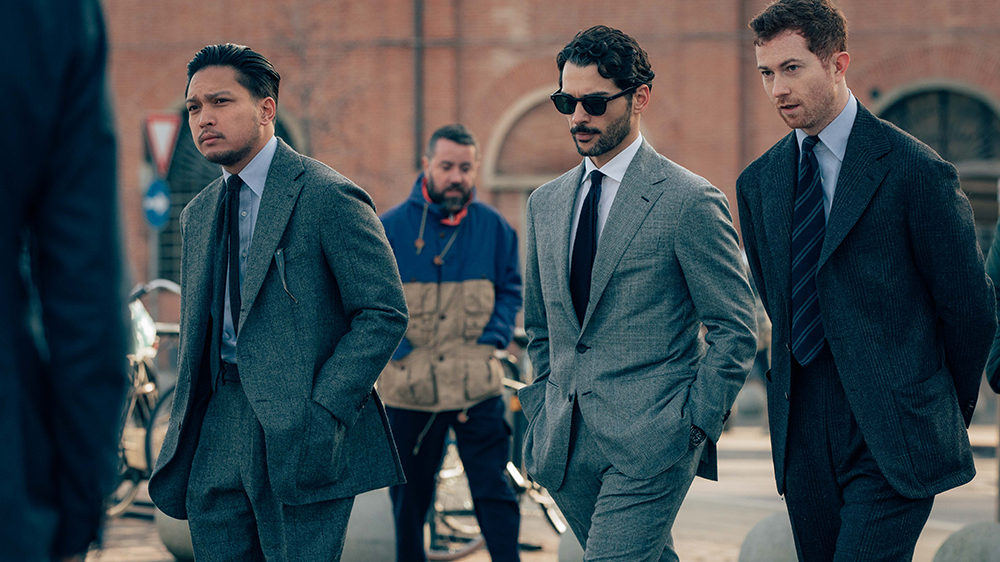 Recently Florence hosted its bi-annual menswear gathering, Pitti Uomo, which preceded the European fashion weeks and ushered in a solid fortnight of collective preening as style-obsessed men gathered from around the globe, usually for business but increasingly in the hope of being papped by street-style photographers. Veteran snapper Jamie Ferguson was on-hand to capture some of the sharpest looks to be seen.

Pitti Uomo is ostensibly a trade fair, where international brands gather for a few days to display their wares and take orders for the year ahead, as fashion editors mingle and discover new labels. But, it’s also a useful barometer for what ‘real men’ are wearing as Pitti tends to attract reporters, buyers and manufacturers, who live and breathe menswear, but are less engaged with high fashion.

It isn’t really the place for trend-spotting, then, although you’ll see a few clear themes in Ferguson’s photography. Rather, Pitti is an opportunity to observe and reflect on how well-dressed men are carrying themselves, and what kind of clothes are speaking to them. Here are some of the things we learned during Robb Report’s flying visit.

This outfit has an unmistakable whiff of the 1970s about it, but given the decade has been influencing menswear (particularly tailoring) for the last few years, that’s no bad thing. The vintage tan textured-leather coat and suede quilted gilet look sleek together, complementing rather than contrasting, making two statement pieces that bit easier to wear. The straight, wide-but-not-too-wide pants add a sense of swagger, and in light tan, harmonize with the rest of the rig. “I like seeing something a bit more directional at Pitti,” Ferguson says of this look. “A long coat and gilet are both menswear staples, but it’s interesting to see a guy dressing like this with leather and suede, rather than tweed and flannel.”

Brunello Cucinelli can always be relied upon to provide new and interesting takes on layering, and here signor Brunello’s chic ensemble plays on pale neutrals. Off-white needlecords sit with a dove gray, almost oatmeal sport coat with mottled brown buttons that pick up his biscuit-colored gilet. Beneath, the white shirt reflects the pants. True to form, this ensemble is all about subtle tonal shifts between trouser, jacket and gilet.

You Need a Duffle Coat Next Fall

Duffles were abundant. The coat has been around since the mid-15th century, but today it’s most often associated with the British Royal Navy. With its coarse melton-wool cloth, unlined construction, hood and toggled front, it was standard issue for sailors during the First and Second World Wars. At Pitti, duffle coats were layered over relaxed tailoring, or used to give casual outfits a down-to-earth aesthetic. This earthy brown number looks great paired with a plaid overshirt and chunky rolled-up jeans.

To prove the point, here’s another duffel. What’s interesting about this look, though, is the focused color palette. Really, there is just mid-gray, tan and chocolate brown on show here, but they’re brought to life with a healthy dose of texture. The melton coat sits over a flecked tweed suit—contrasting the matte outerwear with mottled textures beneath. Both these pieces are lifted with a suitably hairy Shetland sweater, featuring tones that tie into both the coat, the beret and suede shoes. In darker colors, this outfit would look dowdy, but our man here has got his shades just right.

Keep It Casual (Sort of)

Wearing casual jackets over suiting is an age-old Pitti Uomo trope, but accessories designer Max Poglia, seen here on the left with designer and vintage expert Alessandro Squarzi of Fortela, has perfected the formula. “You see looks like this all the time,” explains Ferguson. “Usually, the guy will overdo it—he’d be wearing that coat, and then have a tie, a cowboy hat and a poncho too. I love Max’s restraint here. It’s just a nice suit, western shirt and an awesome vintage coat over the top.” As a side note, pale-blue denim and chambray western shirts seemed as popular as ever at Pitti, with good reason—they’ll go with almost anything.

With its navy-on-navy layering and subtle cream shirt, this outfit says a lot—but doesn’t shout. “This image epitomizes what I like about menswear, right now,” Ferguson explains. “I rate the classicism of the button-down shirt and tie. I like that he’s in a well-cut double-breasted jacket, with a little bit of interest in the brooch (a boutonniere or pocket square would be too much), but then he’s layered a casual coat over the top. Everything about this is just quietly sophisticated.”

Oversizing is a high-fashion trend that’s creeping into mainstream menswear—jackets are getting bigger and more generous, and so too pant widths. This character got his oversized proportions just right. “He was a small guy, but I love how he’s played around with larger proportions. His outfit didn’t swallow him, or make him look short,” says Ferguson. “It’s hard to experiment with proportions when you have a smaller frame, but he nailed it.”

Statement Prints Have a Place

It takes strength of character to rock an overcoat like this. This guy’s commitment to Navajo print is impressive. So too are the coat’s details. It looks to be a polo coat, with its belt, patch-and-flap pockets, cuffed sleeves and popped collar. The precise pattern matching across the coat’s back-seam and through the collar are signs that this was a serious investment piece. Beyond its obvious wow factor, the colors are interesting, too. Chocolate, caramel and beige serve as reminders than tonal brown style is here to stay, while crimson seems to be a popular accent shade right now.

It’s no great secret that men’s tailoring has been gently morphing—not so much in its silhouette or proportions, but in its sensibility. No longer the preserve of formal dressing, more and more stylish men are investing in casual suits as a lifestyle choice—to wear to smart events, gallery openings and dinners out. British tailor George Marsh, of Speciale, coined the phrase “lunch suits” to describe the relaxed, dressed-down two-pieces he likes to make for his clients, and this corduroy number from J.Mueser is a good example. Chase Winfrey wears it with a breezy attitude—popped collar and all. The Barbour Gamefair jacket is vintage, and its longer length makes it a great choice to layer over tailoring.

“He has really leaned into his practical, military, kind-of ‘gorpcore’ aesthetic,” Ferguson says of fellow photographer, Robert Spangle, who served in the Recon Marines in a previous life (he also trained as a tailor on Savile Row). “The amount of straps, buckles, zips and clips in this picture looks crazy, but when you see Rob in action, you realize it all has a purpose and works.” Spangle came straight to Pitti from Ukraine, and arrived wearing clothes that he’d been wearing in the guise of war photographer. “His outfit reminded me that menswear has to fulfill its function first and foremost,” Ferguson adds. “Rob makes super-functional clothes look incredibly stylish. This look was eye-catching in a sea of tailoring, but felt very true to him, which is something we should all aim for when we get dressed.”