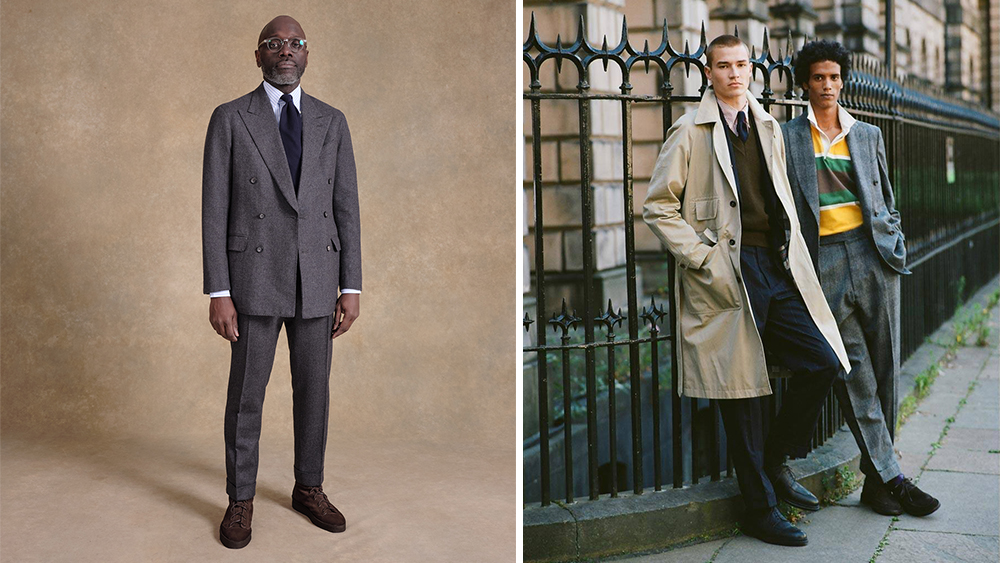 Much of the conversation around wearing suits more casually has focused up-top: reach for a denim shirt, experiment with a crewneck tee, etc. But how about down below?

No, we’re not suggesting that you swap out the trousers for sweats—then it wouldn’t be a suit. But, you can play with the silhouette by leaving your oxfords in their trees and pulling on a pair of boots.

The pairing has become something of a staple for Drake’s, which stocks its own house-model desert boot in addition to a moc-toe chukka dubbed the Crosby. Drake’s creative director Michael Hill cites the Beat Generation as inspiration for the look.

“Poets like David Meltzer and Allen Ginsberg made an unintentionally cool case for the boot in the late ‘50s—not entirely surprising, given that they were driven by exploration,” Hill says. “The boot was practical, of course, but when paired with oxford shirts, lambswool V-neck sweaters and natural, deconstructed tailoring it became subtly, and inherently, stylish, too.”

Both styles are made from suede and are unlined, giving them a soft, casual air that’s a natural match to the label’s less-than-formal suiting. “Imagine a pair beneath a suit cut from needlecord or washed cotton and you’re beginning to get the picture,” says Hill. However, it may not be necessary to imagine the look at all—Daniel Craig did just that, matching a pair of brown Crosby boots to a corduroy suit in No Time to Die.

Anglo-Italian is another champion of the desert boot with a suit, and designed its model (which is also available made-to-order) with a lower profile and minimal toe spring. “The sleeker profile lends itself nicely to sitting under tailored trousers, and with the proportion of our garments in general,” says Anglo-Italian co-founder Jake Grantham. “I hope it’s the kind of shoe you have to look at twice before realizing they’re even boots.”

This past season, the label introduced its mountain boot, which is built on the same last as its desert boot but recalls an outdoor style with a high, eight-eyelet profile. It’s intended for wear with flannel suits, a bold move borrowed from Fiat chairman Gianni Agnelli. But Grantham stresses that the combination of rugged boots and fine tailoring needn’t be exclusive to Italian industrialists.

“My mother is Australian, so I’ve always been exposed to my uncles wearing R.M. Williams boots with their work suits. It’s part of the Australian uniform,” he says. “It speaks to a culture of dressing where the suit is there to be worn in any circumstance.”

On this side of the pond, Sid Mashburn can regularly be seen wearing suits with his Chelsea boots. “Firstly, when you’ve got little-to-no break in your trousers, they give you an elegant and clean line that sort of elongates and simplifies your silhouette—quite similar to the way a pair of Western boots can look,” Mashburn says of the combo’s appeal. “And secondly, it’s just a little bit unexpected—never a bad thing.”

He recommends that Chelsea boots selected for suit service be kept clean to distinguish them from weekend knockabouts, but otherwise sees few limits in terms of their styling.

“As long as they’re in good shape, calfskin can work with pretty much any suit fabric. I’ll even wear my black Chelseas with my tuxedo in the cool winter months,” he says. “And we like to pair Chelsea boots with cool weather fabrics during that season. Chocolate suede Chelseas with gray flannel suit trousers is a killer look as you move into fall.”

To paraphrase Nancy Sinatra, these boots were made for suiting, and that’s just what they’ll do.