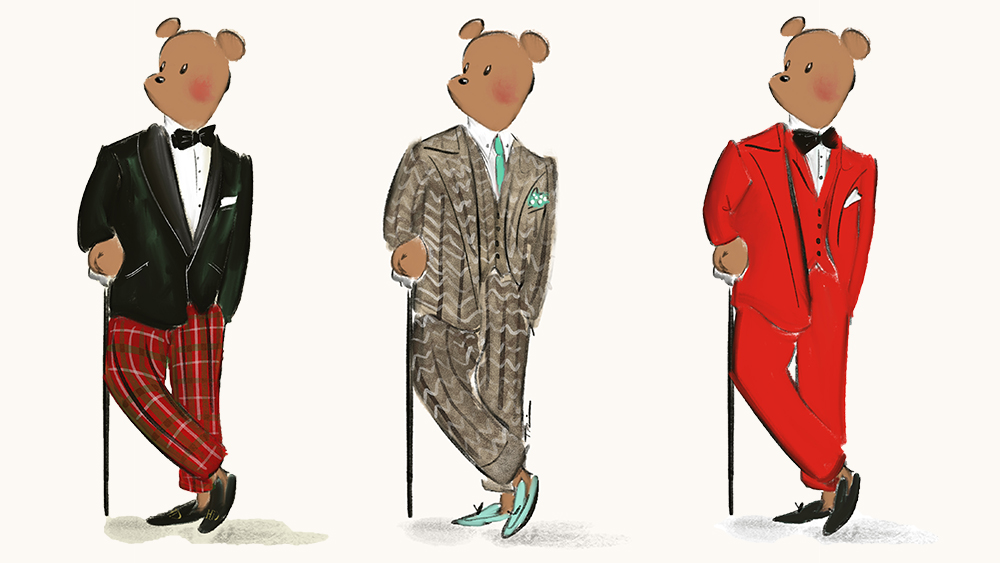 Determining how a zebra might best appear in formal wear doesn’t fall under your typical stylist’s purview, but for Tug Rice, it’s just another day on the job.

“Zebras have got a very wide neck and a tail and, of course, stripes,” Rice tells Robb Report. “So, do you go subtle with the pattern in the fabric and go in the complete opposite direction of the stripes, or do you try and match it? These are the fun questions that keep me up at night.”

His subjects, however, are not flesh-and-blood but pen-and-paper. The self-taught illustrator has carved out a unique niche. The 31-year-old’s scenes, whether they appear on Instagram, fine bone china or in the case of that dapper Zebra, a social media campaign commissioned by Scalamandré, depict well-attired characters in elegant, brightly colored settings.

“It’s traditional in that I’m drawing people doing things in places, which is not necessarily what a lot of people are interested in drawing now, as far as I can tell,” Rice says of his work. And yet, his “narrative” illustrations have received a warm reception, leading to collaborations with the likes of Stubbs & Wootton, Louis Sherry and the Carlyle Hotel, and have graced the pages of Travel & Leisure, Harper’s Bazaar and Elle Décor. He also accepts private commissions, and his prints are sold at galleries including Eerdmans New York.

Rice, who grew up in Pennsylvania’s Lehigh Valley and studied drama at Carnegie Mellon before moving to New York, takes after his grandfather, a Bethlehem Steel foreman who taught himself to paint and pursued the artist’s life full-time after encouragement from 20th century modern art giant Andrew Wyeth. Rice believes some of the popularity of his work stems from the sense of bygone glamour his illustrations evoke. Black tie abounds, and the grand hotels of New York and London are frequent settings (and their patrons are frequent subjects).

“There’s a sense of nostalgia, but something about it feels fresh and playful,” Rice says. “It’s never stale…there’s that balance between what I perceive to be a real nostalgia for past decades while staying relevant for today. My scenes are typically places that have been around for a while and aren’t going anywhere.”

A placemat commissioned by Dior for its 2019 menswear show in Miami.  Tug Rice

But for all the romance of The Ritz London or Fifth Avenue at Christmastime, it’s the people that bring his illustrations to life. According to Rice, much of their inspiration is drawn from present-day Manhattan.

“People costume themselves when they wake up, when they’re walking their dog or are out with their shopping bags, and it’s very theatrical. A lot of people want to be seen. As an artist, I was fascinated by the extreme side of that, and the subtlety, and had to rush home to sketch it out. That’s kind of what evolved into a profession.”

But unlike the Scott Schumans of the world, Rice has final say over how his subjects are attired. He notes that many of the outfit choices happen organically, as he fills in a scene. “There’s a lot of black tie—but what if someone’s in a cream-colored dinner jacket?” he says of one prospective illustration. “What does that do? He’s going to stand out in the picture, and that’s going to tell a whole new story.”

An illustration of Bemelman’s Bar at the Carlyle hotel; a drawing from a series sold via 1st Dibs.  Tug Rice

His most recent collaboration is with Halcyon Days, a London-based purveyor of fine bone china, which has utilized his artwork in bangles, dinner plates, musical boxes and more. The partnership was brokered by Paul Feig and his wife, who befriended Rice during a weekend in Palm Beach and introduced him to Halcyon Days CEO Pamela Harper.

The star of the ongoing Halcyon Days Tug Rice collection is undoubtedly Hal the Bear, an anthropomorphic ursine who owes something of a stylistic debt to the dandyish director. “He’s not unlike Paul Feig, not unlike a lot of the dapper dandies that we know through Instagram or through the magazines,” Rice says. “He’s a bear about town, and I think what’s fun is that we’ve expanded on him and he’s got a future, and I don’t know exactly who he is.”

Hal may still be finding his own style, but Rice says that future collaborations with Halcyon Days will see him attired in golfing wear and a tweed suit for the races. And as for his young creator, it appears that Rice, too, is going places.