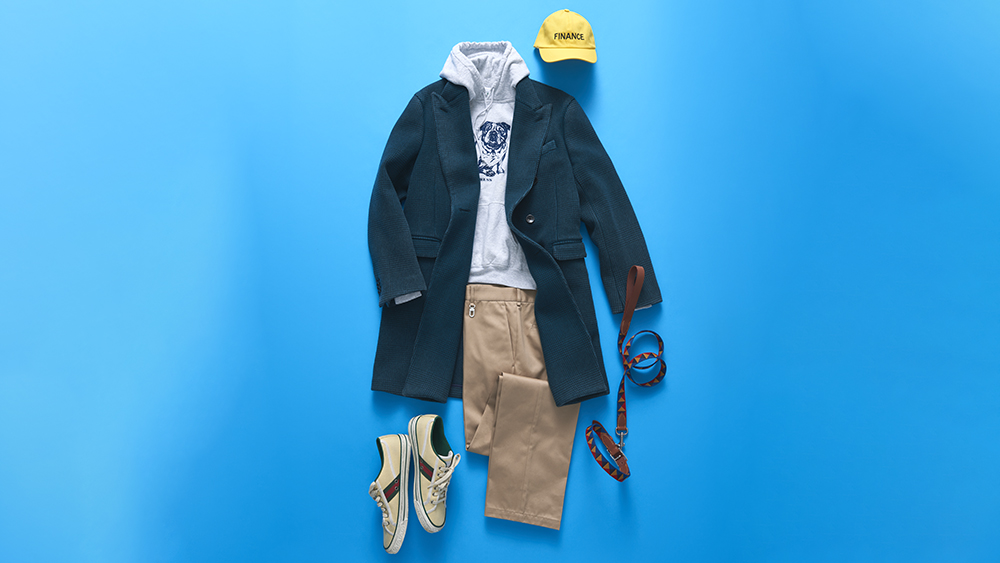 In certain corners of the Internet, there are signs that the sneaker bubble has finally burst. Digital forums known for fervently reporting on the latest Nike releases have turned their attention to a shoe that is, by most definitions, the antithesis of cool: the penny loafer. Buzzy labels like Aimé Leon Dore are now sharing airtime with stalwarts like Alden, lending the classic a newly hip status. And that’s just one marker of the preppy renaissance currently playing out across the menswear spectrum.

Of course, little about this is really new. Ivy style came to the fore almost a century ago, and you can probably already picture the look: soft-shouldered sack suits, hardy oxford-cloth button-downs, rugby shirts and repp ties. Prep is the rare fashion trend that has endured largely unchanged since it was popularized. Ralph Lauren has been riffing on it since he first set up shop, and a slew of young brands, including Brooklyn’s Wythe and London’s Jake’s, have sprung up with gimmick-free re-creations of the original Ivy staples.

“It’s the quintessential American look,” says Richard Press of J. Press, an elder statesman of Ivy outfitters. Equal parts laid-back and decorous, it’s also particularly well-suited to the current moment. “You go to work in an oxford button-down shirt, a blue blazer, khaki slacks and that, today, is dressing up,” Press says. It’s a uniform, he explains, which communicates that a man “still adheres to certain principles.”

What those principles are, however, is endlessly up for debate. While prep today is associated with a certain type of country-club politesse, the aesthetic “began with college kids [messing] around and having fun,” says Jack Carlson, founder of Rowing Blazers, a brand that’s bringing irreverence back to Nantucket Reds and needlepoint belts. “The irony of preppy style is that it was born out of a spirit of rebelliousness.”

That attitude was perpetuated in various forms, as different subcultures from skaters to musicians adopted elements of Ivy—think of Kanye West’s prep-hop look from his early-2000s The College Dropout days or LeBron James walking the tunnel in a Thom Browne sack suit, oxford-cloth shirt (and shorts) included. According to Jason Jules, coauthor of Black Ivy: A Revolt in Style, out in December from Reel Art Press, the style has been re-appropriated for almost as long as it has existed, including by Black Americans of the ’50s such as Martin Luther King Jr. and James Baldwin, who gave it political resonance. “It signifies social access,” Jules says. “The white picket fence, a good education and all the rest of it, the things that Black generations weren’t permitted to have… Ivy democratized the idea of having access to luxury, that we could all have a piece of that rock.”

So why, at a time of great social reckoning, is preppy style striking a pinwale cord? Actually, it fits a pattern: The golden age of Ivy style overlapped with the Civil Rights Movement; the ’80s Preppy Handbook resurgence followed the counterculture turbulence of the 1970s. “We’re going through an unstable phase,” Jules says, so “it makes sense for people to look back toward this touchstone that’s reassuring.”

What differentiates the current wave is an appreciation of technical minutiae coupled with a more expansive view of the style’s potential. The new school is a diverse class, cross-pollinating Ivy with everything from streetwear to Neapolitan sprezzatura. “Twist it any way you want to twist it, that’s the beauty of it,” says Michael Bastian, the designer who is guiding Brooks Brothers—the preppy mothership—back from the brink. His first collection, in stores now, began with perfecting the staples that the brand made famous. “The basic elements, like chinos and oxford-cloth shirts, cashmere V-necks, down vests… they’re all very simple,” he says. “It’s all how you put it together yourself.”

In one man’s hands, they’re Main Line blue blood; in another’s, Silver Lake fashion bro—or maybe both at once. Their simplicity and lack of fuss leave ample room for every man to make them his own.

“These edgier streetwear brands are less democratic than a brand like ours,” Bastian says, “which has great price points and high quality and is enduring.” Ultimately, maybe that’s why prep has remained: It’s a sort of anti-hype, the elements so attainable and unassuming that it’s up to the wearer to add the swagger. By that measure, good old-fashioned penny loafers can be infinitely cooler than any four-figure sneaker.