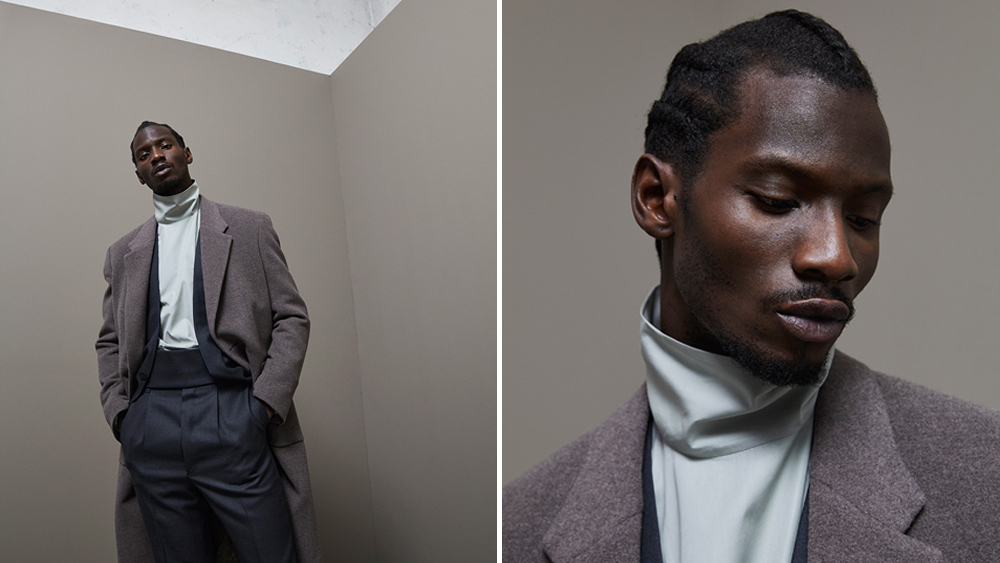 Menswear’s conflicting moods this fall—a return to tailored sophistication on the one hand, an impulse for decidedly casual sportswear on the other—find harmonious resolution in a collaborative collection from Ermenegildo Zegna and Los Angeles label Fear of God. Consider it the cure for split sartorial personalities. At first glance, the Milanese stalwart of power suiting and the buzzy brand with a cult following among the streetwear set may seem unlikely bedfellows. But when Zegna’s artistic director, Alessandro Sartori, was introduced to Fear of God founder Jerry Lorenzo, the two quickly bonded over a mutual desire to rewrite the rules of male elegance.

“We both instinctively knew about this gap between what’s happening culturally and traditional tailoring,” says Lorenzo.

“We looked at today’s man and what his needs are: How does he maintain his own identity, from a sweatsuit to a tailored piece, without losing his point of view? There’s a place in between that speaks to both.”

Their proposal marries the SoCal skater silhouettes favored by Lorenzo with the superlative materials and polish for which Zegna is known: Think boxy bombers in nappa leather, minimalist topcoats in brushed wool and gabardine, and refined tracksuits in matte silk. Tailoring, naturally, is on the menu but executed with a sleek, modernist sensibility. Pleated and tapered trousers can be paired with broad-shouldered one-button jackets or roomy overshirts, with knit-wool Henleys or patch-pocket shirts.

In any combination, these pieces make a compelling case for dressing with the ease of streetwear but without looking like a wannabe Yeezy. “I really like [Jerry’s] approach with fit and proportions,” Sartori says, adding that he’s been wearing the collaboration’s suits “since day one” of the launch. “We wanted to explore new ideas for the future of menswear, for a man whose lifestyle is a hybrid of elegance and freedom.” More casual staples include a beautiful pair of faded jeans and a suede sneaker/driving moc mashup that’s just plain cool.

Done entirely in a palette of neutral grays, browns, cream and black, the collection offers a full wardrobe of items that bridge the stylistic gap between Via Monte Napoleone and the Sunset Strip. In other words, it’s the kind of laid-back luxe that hits all the right notes, right now.