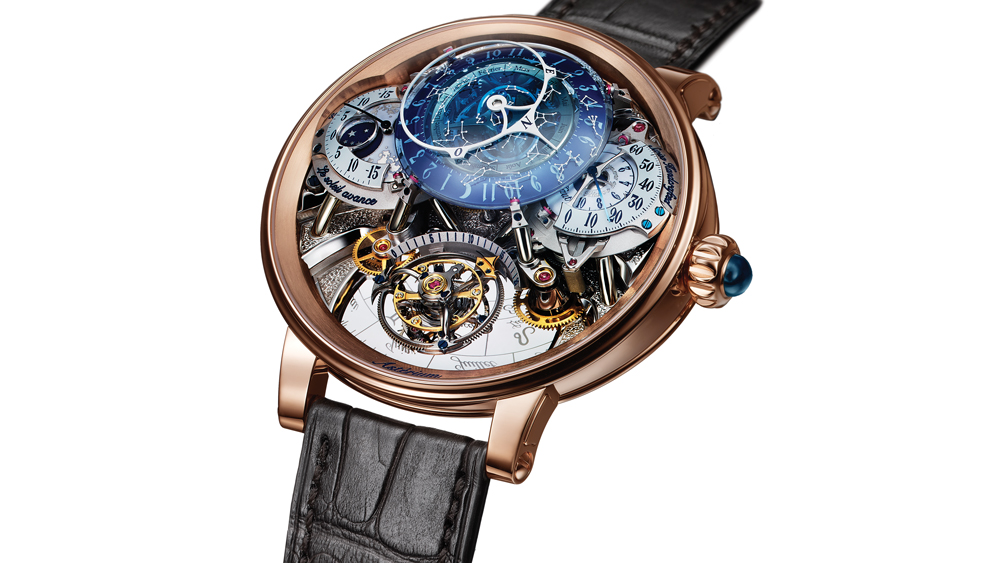 Photo: Will Styer for Robb Report

Speaking with Pascal Raffy, owner of Bovet, is unlike having a conversation with any other principal at a Swiss watch company. From the beginning, it is apparent that Raffy operates under a different value system than any of his peers—one that is family oriented above all else. Only after you accept this fact can you believe he is utterly sincere when he tells you that the biggest creative change at his company came from a dinner conversation with his then 14-year-old son.

“Five years ago,” Raffy explains, “my son, Amadeo, told me: ‘You love your pocket timepiece of the 19th century, but I’m a young gentleman of the millennium. What could be a modern expression of Bovet watchmaking art?’ I did not completely understand that the same day, because I had that philosophy to be very loyal to the two centuries of Bovet watchmaking, but Amadeo was right. I had to try to design for him a more modern expression of time.”

That initiative resulted in 2015’s Braveheart timepiece, which was Bovet’s most ambitious technical achievement at the time. It boasted a number of novelties for the brand, including a flying tourbillon, a futuristic balance design, and a cylindrical hairspring. It also sported an ultralong 22-day power reserve.

But the most striking thing about the Braveheart was its appearance. Like many Bovets, it was a double-sided watch to take advantage of its “convertible pocket watch” strap/ chain system, and the tourbillon carriage was suspended in an almost empty void at the bottom of the watch. This feature had grown increasingly dramatic over five years of evolution, and it left the rest of the complex movement densely crammed and fully visible in the upper portion of the case.

Bovet’s engineers took the plaudits the Braveheart received to heart. Working with Raffy’s top-line directives for the next timepiece— to create a “universal time” watch— they devised a movement with a suspended tourbillon, two dramatic hemispheres for world-time indication in the center of the watch, and a jumping hour/retrograde minute with a roller city indication at the top. The density of mechanics created an inclined plane, which Raffy matched with an inclined case—a design, he says, that came from his childhood writing desk. The dramatic architecture of movement and case was a major departure for the traditional brand, and one engineer recalls a palpable nervous tension before the cased prototype was shown at the castle.

The castle: another peculiarity of the Bovet brand. Sitting high on a hillside overlooking the famous Val-de-Travers of Swiss watch lore, the Château de Môtiers is a 14th-century fortress that lay partly in ruins before Raffy bought and restored it. He uses it as a residence, and numerous artists and engravers work in the assembly facility in its upper floors, which are naturally imposing. If they still made classic horror films, Raffy would have a lucrative sideline renting the place out.

As it happened, the watch, which was named the Récital 18 Shooting Star, was wildly successful, with all 50 pieces selling out within six months of the launch. Moreover, Bovet’s developers and Raffy himself were in possession of a new design confidence that pushed them to make an even more ambitious timepiece the following year. The Récital 20 Astérium is a comprehensive astronomical watch with sidereal display and star chart, a sidereal annual calendar, moon-phase equation of time, and a zodiac indication on the reverse. All these functions occupy the same size angled case as the Shooting Star, with an enhanced sense of movement volume created by longer pinions and dramatic angled pillars supporting the different levels.

“The Astérium was that absolute will to have much more volume, much more density,” says Raffy with a measure of unintended bravado, “to have 12 complications all fine-tuned, in a case that you can still wear on your wrist.”

The latest, but not last, chapter in Bovet’s expedition into creative movement architecture is the Récital 22 Grand Récital, which is yet another alternate look at space and time. A rotating hand-painted globe (with heavy Super-Luminova) dominates the upper, thickest part of the movement. It shows the solar day using the tourbillon to represent the sun. A fully accurate orbiting moon gives the moon-phase indications. The redesigned perpetual calendar on the reverse side was probably the most difficult technical feature involved in building the movement, but it is overshadowed by large graphic constructions that make brilliant use of the space.

As for Pascal Raffy, he seems more than satisfied with the level of attention the new direction has won the brand, even if it upsets the traditions he had long championed. “We always thank our roots and our tradition,” he says, “but something was missing. We do need more modernity to look to tomorrow. Amadeo, you were right.”