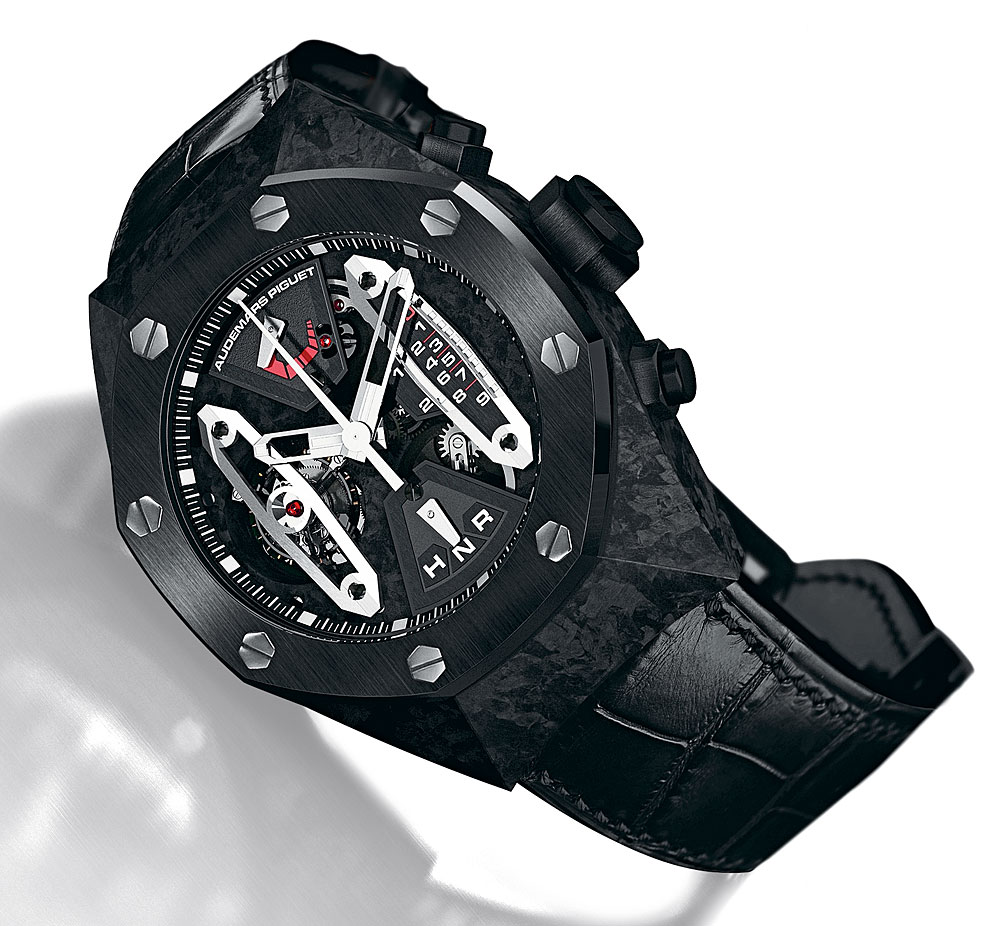 Superstrong and ultralight, carbon fiber has long been the preferred material for high-performance applications that demand sturdiness. Formula 1 racecars, America’s Cup yachts, and even aerospace vehicles have fully leveraged the material’s technical properties. Until recently, however, many watch designers used the matte-black, swirl-textured composite primarily for decorative accents.

Swiss watchmaker Audemars Piguet, however, pioneered the use of carbon fiber for function as well as form. The company’s 2006 Maserati MC12 Tourbillon Chronograph featured a baseplate shaped from condensed carbon fiber, and the 2007 Royal Oak Offshore Alinghi Team Chronograph incorporated an unusually hard carbon-fiber bezel and case that were crafted using a special forging technique. Due out next year, the $251,100 Royal Oak Carbon Concept Tourbillon and Chronograph—a follow-up to the groundbreaking Royal Oak Concept of 2002—is Audemars’ latest offering that uses the material. “The goal was to mix the different achievements that we’ve had over the last six years,” says François Henry Bennahmias, president and CEO of Audemars Piguet North America. “We could not do another Concept six years later with no evolution.”

The Royal Oak Carbon Concept is surprisingly light thanks to materials such as forged carbon, amorphous carbon coatings, ceramics, titanium, and anodized aluminum, which forms the watch’s green central bridge. The absence of a dial provides a full view of the hand-wound Caliber 2895 movement’s key components: the tourbillon carriage—comprising more than 70 parts yet weighing a mere 0.45 grams—and the column wheel, which is the chronograph’s nerve center. Audemars presents a novel twist on the 30-minute chronograph with a linear minute counter consisting of two columnar scales, with tens of minutes on the left and single minutes on the right. Tiny windows that correspond to each numeral mark elapsed time by changing from white to black. The wearer shifts from winding to time-setting by adjusting the stem.

The Royal Oak Carbon Concept is “another step before moving to a completely different level,” says Bennahmias. Only 30 to 40 of the watches will be made annually.