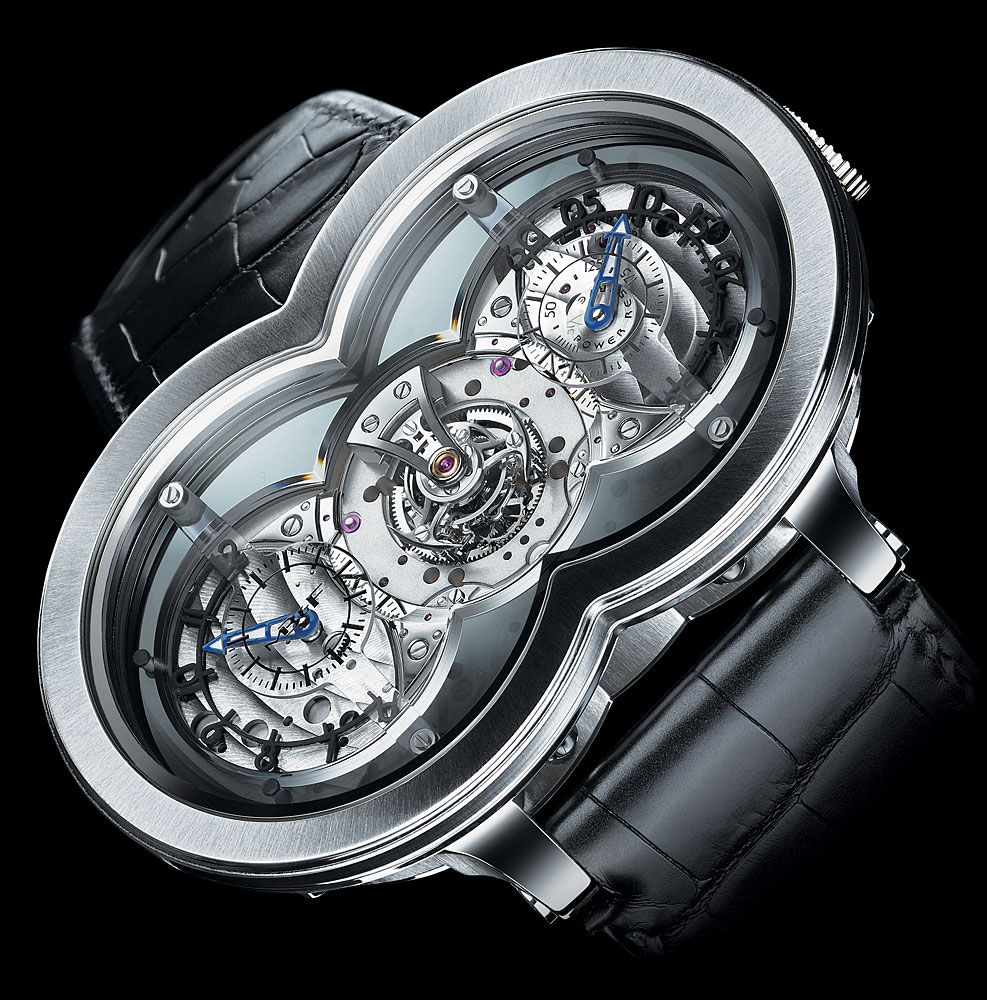 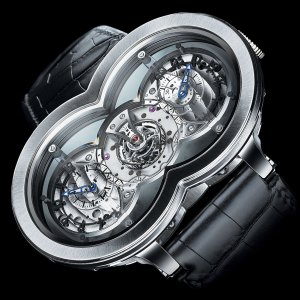 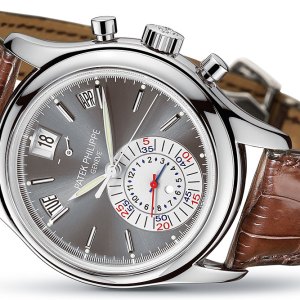 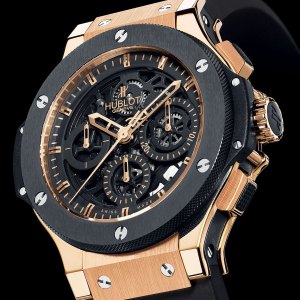 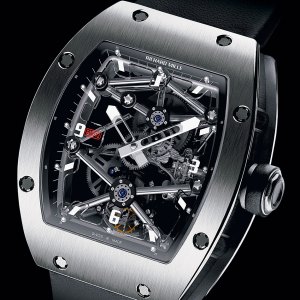 Nick Stellino, a Los Angeles–based television chef, author, and marketing consultant, speaks with obvious relish about the “structure and flow” of timepieces, and compares them to evolving forms of architecture. “What I like to see,” he says, “is the signature of a human being rather than the industrial feeling one often finds in modern watches.” While not all collectors share Stellino’s intellectual and abstract appreciation for watches, many are more deeply involved in their pastime than ever before. Not only are these aficionados familiar with the technical aspects and histories of their timepieces, they know of and have sometimes met the personalities behind these creations. Not surprisingly, many collectors today favor timepieces from smaller, independent companies that infuse watches with a designer’s personal vision rather than just a company’s identity. Large brands have plenty of followers too, but today they must offer more than prestige if they hope to satisfy the breed of collector that wants to know everything there is to know about a watch and its maker.

The following individuals, all Robb Report readers and avid collectors of fine timepieces, bring this kind of passion and curiosity to their horological pursuits. Though their tastes and opinions differ, they find common ground in their appreciation of and respect for the artisans behind the art.

Kathleen Beatty (name changed upon request), a collector from Northern California, prefers highly original timepieces made by small companies. Beatty is something of an original herself, in that she collects only technically sophisticated men’s watches. Her impressively large collection includes pieces by DeWitt, HD3 Complication, Parmigiani, and Bovet.

Beatty also counts among her favorites several boutique pieces by Maximilian Büsser & Friends, a company founded in 2005 as a watchmaking collective. With the help of a number of talented watchmaking specialists, many of whom he met during his years as the managing director of Harry Winston’s watch division, Büsser has released three unorthodox models to date, each made in very small numbers by a differenttgroup of collaborators. “The thing I love about Max’s pieces is that they are so unconventional,” Beatty says. “On the HM1, I like the way the hours and minutes are on separate side-by-side dials with the tourbillon raised in the middle. That’s pretty cool.” Beatty owns the first two of Büsser’s timepieces and is seriously considering the third. The original HM1, however, remains her favorite for its striking lines and legibility.

Büsser, unlike principals at larger companies, remains his firm’s most important ambassador. He keeps open lines of communication with passionately involved collectors like Beatty. “I’ve been e-mailing him since last fall about the two watches I have already,” she says. “I had the opportunity to meet him recently in New York, and he’s just the nicest person. He told me how he arrived at the concept for each watch and showed me all the drawings for each design. He also tells the story of his collaborators. I happen to know Peter Speake-Marin, who worked on the HM1. I have his tourbillon.”

Back from the Edge

“At one time I was into the very contemporary, edgy watches that get a lot of attention these days,” says Rudy Kurniawan, a collector in Southern California. “But now I have gravitated back to more classic looks.” Classic, that is, with a contemporary flair. His current favorite is a Patek Philippe 5960 Annual Calendar Chronograph, which he describes as being “old-world, but with a modern feel.”

Patek Philippe’s 2006 debut of the 5960 was a relatively dramatic move for the ultratraditional brand. The piece featured a new chronograph movement that, rather than displaying the elapsed time in two or three traditional subdials, sported a single, bold totalizer at the 6 o’clock position. “It looks elegant and sophisticated with a suit,” says Kurniawan, “yet you can wear it every day without being too flashy.”

Such touches clearly differentiate this model from more conservative timepieces, like Patek Philippe’s classic 5070 chronograph, and from the ultramodern work of Richard Mille, which Kurniawan still admires but wears infrequently. He sees a similar balance between classic and modern in F.P. Journe’s collection. “As in food and wine, your palate changes over time. For me now, subtle changes in design make all the difference.”

Simon Perch (name changed upon request) is a relative newcomer to serious watch collecting. In the year since he became interested in fine watches, the Denver-area aficionado has set his sights on a number of hard-to-acquire pieces. “When I started collecting, I was attracted primarily to Breitling and Panerai,” he says. “But as time has passed, I’ve gravitated toward companies like Hublot and Audemars Piguet.” Perch, like many younger collectors, is attracted to the large, bold, sporty timepieces that have been prominent recently. He says he would love to get his hands on Audemars Piguet’s latest Royal Oak Offshore Survivor limited edition, but he is realistic about his chances of acquiring one, given the crushing demand. Recently, Perch was able to acquire Hublot’s red-gold Aero Bang, which is based on the company’s now-famous Big Bang, only with a skeleton dial. “I saw the watch in a photo, and to be frank, it didn’t knock my socks off,” he says. “But when I finally saw it and held it in my hand, it had just the right amount of rose gold and contrast. I secured it from [the Denver-based retailer] Oster Jewelers as quickly as I could.”

Like many sports-watch fans, Perch describes himself as being primarily attracted to design. However, he also keeps an eye on companies that offer technically accomplished watches. “While I’m not really into complicated watches right now,” he says, “I’m really looking forward to Hublot making its own movements; I’ve been following the development of its new facility.”

“The first thing you ought to know about me is that I am a vintage guy,” says Paul Boutros, a New Jersey–based collector who is so enthusiastic about horology that he attends the watch shows in Switzerland each spring. Boutros is primarily interested in wristwatches from the 1940s and ’50s, especially Vacheron Constantins. With more modern pieces, however, his tastes vary. “Of course I like designs that will last a long time,” he says, “but beyond those, I like things that are so out-there and innovative that they are just aesthetically superb.”

One of the first pieces Boutros mentions is Richard Mille’s striking RM 012 model, which debuted in 2006. Mille designed the timepiece without any conventional plates and bridges, instead suspending the critical wheels and arbors in position using an elaborate lattice of aluminum struts. “This watch is similar in style to his previous work,” Boutros says. “But by eliminating all the bridges and plating with these struts, he has given the watch such a great look. I am not a fan of tourbillon wristwatches, but this one is so cool I like it anyway.”

In fact, Boutros prefers watches designed for improved timekeeping. He cites Chopard’s first in-house chronograph, the Chrono One, as a significant example of this. “In my opinion, this watch has fallen under the radar,” he says. “It is a great movement that has not received its due. It is a vertical-clutch, column-wheel chronograph with a great variable-inertia balance system.” Chopard added a number of practical innovations in the reset and automatic winding mechanism, which, while subtle, appeal to a technically astute collector like Boutros.

In contrast to the protean tastes of Paul Boutros, Nelson McCosh (name changed upon request) is a model of consistency. While this Virginia resident owns several makes of wristwatches, he prizes a specific line: IWC’s pilot’s watches. “A lot of my fascination with this company lies in its history and the way it has taken old models and modernized and reintroduced them,” he says. “The Big Pilot’s watch was the first timepiece I really loved.” This model is a descendant of both a massive 1940s watch the company made for the German Luftwaffe and a string of smaller but highly prized pieces it subsequently created for Britain’s Royal Air Force. The Big Pilot’s watch sets the characteristic black-and-white dial of these historic pieces in a large (46.2 mm), contemporary case.

McCosh’s latest acquisition, a limited-edition Big Pilot’s with perpetual calendar, may showcase IWC’s capabilities better than any watch the company has manufactured to date. The limited edition, originally made for Cellini Jewelers in New York, contains IWC’s extra-large in-house movement equipped with the company’s own Pellaton winding system. The perpetual calendar built on top of the movement was one of the company’s most noted developments during the 1980s.

IWC, which is located in northern Switzerland, complements its strong technical prowess with a no-nonsense aesthetic. “To me, its finishing has a more Germanic quality,” McCosh says. “My other favorite brand is A. Lange & Söhne, and overall, its watches are far more functional-looking.”