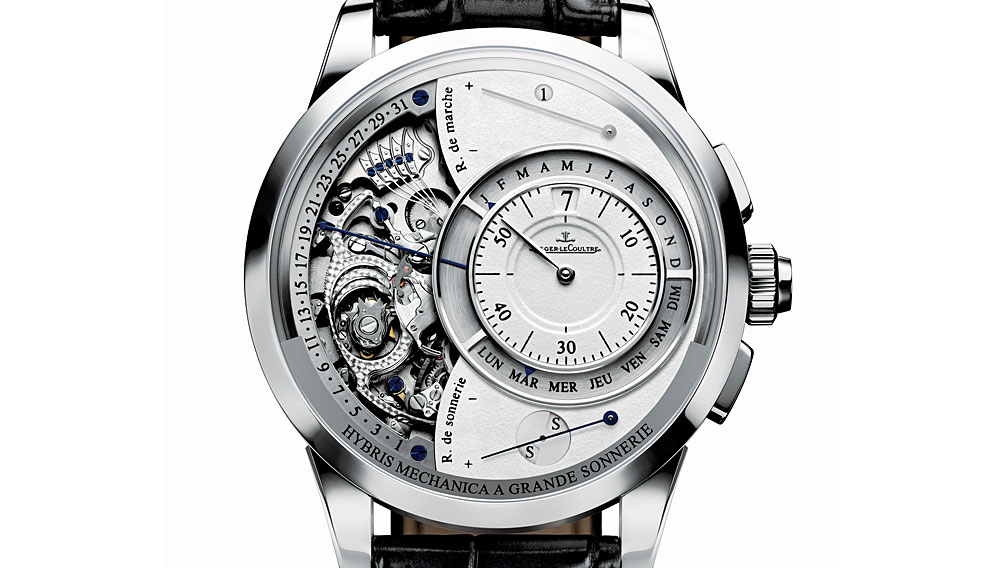 Upon its release in 2010, Jaeger-LeCoultre’s latest summit-class timepiece, the Hybris Mechanica a Grande Sonnerie, will be the most sophisticated musical watch the company has ever manufactured. Composed of 1,300 parts, the complex Grande Sonnerie will operate as a minute repeater, as a petite sonnerie that rings just hours, and as a full grande sonnerie that rings hours and quarters with the Westminster chime and a special four-note phrase from Handel on either side of the strike. As if that were not impressive enough, the watch will also come with a tourbillon and perpetual calendar.

Jaeger-LeCoultre will offer this daring piece in 30 sets that include the company’s two other grand complications: the original Gyrotourbillon and the massive, three-faced Hybris Mechanica a Triptyque. The company will deliver this $2 million collection in a leather-clad, state-of-the-art Döttling safe dubbed the Coffret 55. (Fifty-five denotes the total number of complications in the three watches.)

The Grande Sonnerie’s design—created by a team led by David Candaux—is ingenious. The energy for all musical functions in the timepiece comes from a special spring barrel transmitted directly to the strike train by a multilevel rotating part called the entraineur. Time is recorded by an even more complex assembly Candaux calls the “infernal tower,” a vertical stack of no fewer than 18 cams that rotate at three different speeds. This mechanical brain transmits time information to the different chime functions and also drives the hands on the dial.

The company has improved the highly technical methods it uses to construct musical watches, resulting in a quieter regulation system that controls the speed of the strike. It has also crafted an articulated hammer that hits the springlike gongs and then pulls itself away after impact to allow freer, more resonant vibration. Proud owners of the Grande Sonnerie will be able to hear this vibration, even as the timepiece rests inside the Coffret 55. A system within the safe will pick up the regular chime and amplify the sound for everyone in the room to enjoy.