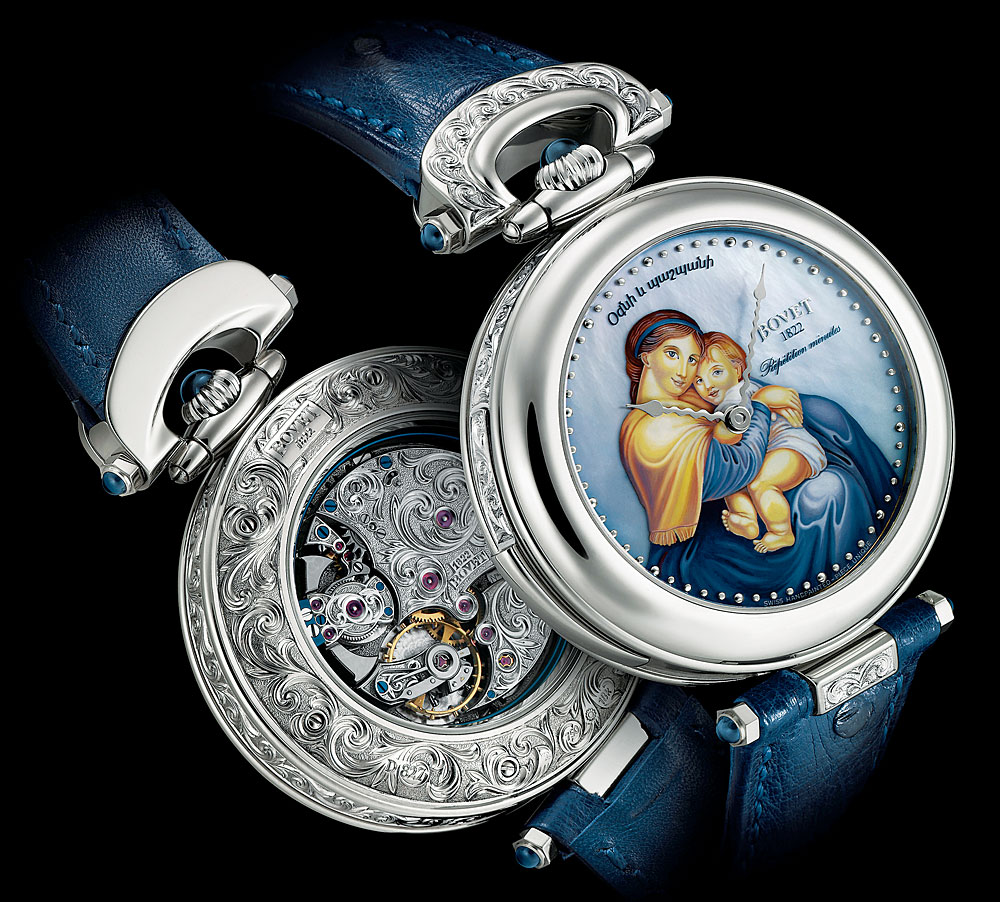 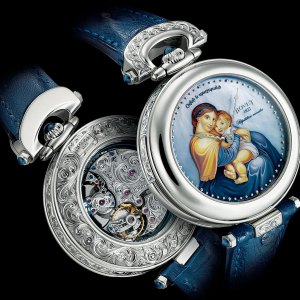 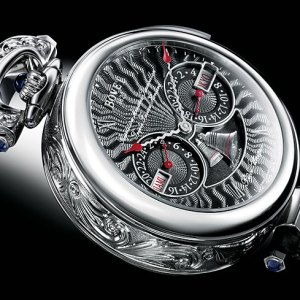 A pair of complicated custom wristwatches—one of which will feature a handpainted dial—from Swiss manufacturer Bovet.

In one part of the world, at least, Bovet—the watch brand Edouard Bovet founded in 1822 in London—was to watches what Xerox was to copy machines. “Bovet was such an important brand in China, it became a synonym for the word watch,” says Roy Davidoff, manager of the company’s U.S. branch. “Instead of asking, ‘Do you have a watch?’ people would ask, ‘Do you have a Bovet?’”

The company, which sold thousands of pocket watches to Chinese nobles and courtiers in the 19th century, offered its timepieces in pairs, for both cultural and pragmatic reasons. “Paired gifts are very popular in Asia. Twins are very propitious, they are considered good luck,” says Davidoff. “It was also practical, because if one breaks, you have a spare. You’d send one to be repaired while the other still works.”

The chance to have a spare was a significant selling point for Chinese customers, because it could take as long as six months for Bovet to receive a broken timepiece, fix it, and then return it. The dials also contributed to the watches’ popularity. Bovet decorated them with miniature paintings of European flowers, landscapes, and other subjects that Asian clients found exotic. “They did not want Chinese images,” Davidoff says. “They wanted something that they did not have back home.”

Bovet, which was relaunched in 1994 in Geneva, now produces wristwatches that recall the brand’s early history. On each of its timepieces, the crown (the buttonlike protrusion on the top of the case) and the bow (the piece of metal that arcs above the crown) are similar to those of antique pocket watches. The glass-covered back, which permits a peek at the internal mechanisms, also has its origins in the 19th century, as do the fleurisanne engravings that can decorate a Bovet watch’s case, back, and bow. The serpentine shape of the hands recalls another style that was popular in the 1800s.

As it used to do in China, Bovet, for this gift, is offering a pair of custom watches, though these will not be twins. Both will incorporate several complications, and one will display a painting of your choice on its mother-of-pearl dial.

The painted example is represented by the watch on the preceding page, which features a portrait of the Madonna and Child derived from Raphael Santi’s 1514 painting, Madonna della Sedia. Artist André Martinez needed almost 100 hours to complete this image. He spent some of that time firing the dial in a kiln to dry the enamel paints. “He has to let the color cook for 45 minutes to an hour,” Davidoff says. “Sometimes a watch face goes in the oven 35 times in a row.”

Davidoff recommends commissioning a large watch, one with a case that is 1.7 inches (43 millimeters) in diameter, to provide Martinez with more room to depict the chosen subject. But the artist will work with a case as small as 1.5 inches (38 millimeters). Regardless of the watch’s size, Davidoff promises, “the image will be something as complex as the Madonna. Under a microscope, you’ll still see incredible detail.” The watch also will contain a minute repeater and a tourbillon, and its case will be 0.5 inch to 0.6 inch (13 millimeters to 15 millimeters) thick.

The more complicated watch, which is represented by the timepiece above, will have a tourbillon and a minute repeater as well as a triple time zone function and an automaton. Bovet’s triple time zone feature, which enables you to track the time in three parts of the world, is controlled by four small buttons, two on either side of the case. (The fleurisanne engravings obscure the buttons on the pictured watch.) A set of bells, displayed in the window below the watch’s center, will be connected to the chiming mechanism in the minute repeater; when the hammers strike the gongs, the bells will move. “It’s decorative,” Davidoff says of the bell feature, “but it’s supercomplicated to have it do that.”

You can select the case metal for each watch and the strap materials, and Bovet will provide a mahogany box to hold both watches, just as the brand once did for its Chinese customers. Bovet also will fly you to Geneva to visit its facilities and view the watchmakers and artists at work—an opportunity not easily duplicated.

{ The watches will take at least 12 months to create and deliver. }