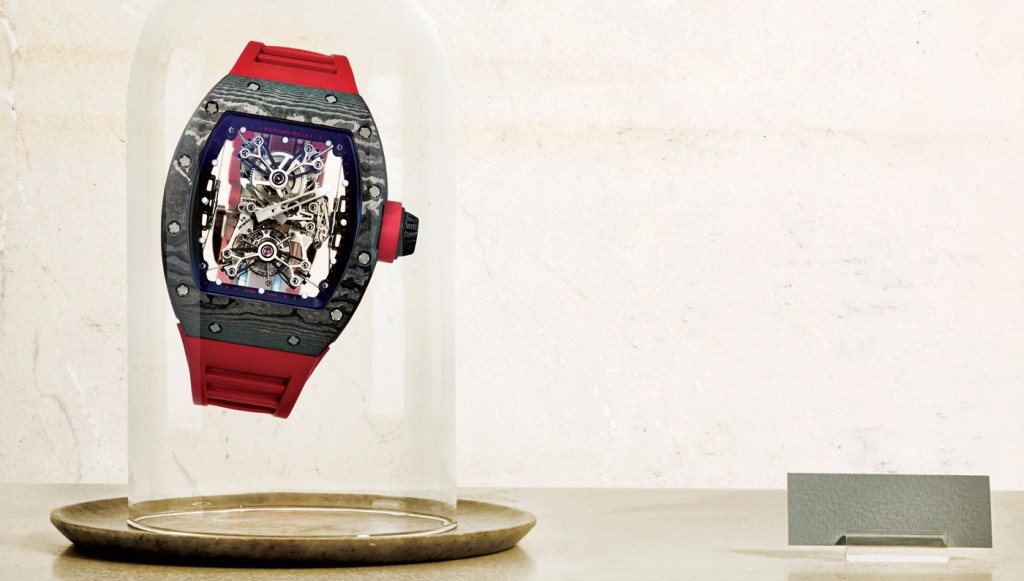 Led by brands like Richard Mille, the watch industry has put itself on a diet, designing new timepieces that barely tip the scales. “Lightness had already existed for high-end luxury sports cars, bicycles, and motorcycles for several years,” recalls Richard Mille, founder and CEO of the respected manufacture that bears his name. “The entrance of lightweight materials into the luxury market—the idea that luxury luggage or eyewear could be lightweight yet strong—was a landmark.”

Mille was not the first watchmaker to create an ultralight timepiece; Porsche Design began using titanium components in 1980. Nevertheless, Mille more than any other watchmaker altered the perception long held by collectors that equated weight with value and importance.

Starting with 2004’s RM 006 Felipe Massa, Mille began to experiment with a series of unusual materials borrowed from other industrial and sport applications, including carbon nanofiber and aluminum alloys with silicon and lithium. Each successive watch was lighter and more expensive—a progression that culminated in the $525,000 0.71-ounce RM 027 Tourbillon built for tennis star Rafael Nadal.

Mille excels at industry-rattling statement pieces, but his work has paved the way for lightweight watches to go quietly and steadily mainstream. Part of the reason is technological: Early titanium pieces necessitated a bead-blasted finish, which severely restricted designers’ aesthetic options. But the expensive and highly technical process of polishing the material—mastery of which was limited 10 years ago to specialty brands like De Bethune—has spread to the upper echelon of Swiss case manufacturers, which are now able to offer a range of titanium finishes at a level of quality nearly on par with white gold.

The ability to work with carbon fiber has similarly proliferated. Originally, Richard Mille had to source the carbon nanofiber for the baseplate of the RM 006 from the U.S. Air Force, which had developed the material for stealth aircraft. In the intervening years, watchmakers have discovered that they can achieve acceptable strength-to-weight ratios from much less specialized manifestations of the material.

Many brands have tapped the expanding range of colors and surface textures that can be applied to lightweight materials to create the highly contemporary, slightly aggressive shapes that have flavored the category. Some companies, however, are taking their designs a step further, combining light materials with inherently spare skeleton movements to produce a lightweight visual quality that mirrors the physical specifications of the watches.

“The RD820SQ is designed down to its most transparent and minimal framework,” says Gregory Bruttin, director of R&D and watchmaking for Roger Dubuis, of the Excalibur Carbon Automatic Skeleton, one of the brand’s signature pieces in cutting-edge materials. “All of these elements give our Excalibur watches a very architectural look centered around the skeleton principle and, combined with the construction and material, make wearing the Excalibur Automatic Skeleton a remarkable experience.”

That experience may be the most enduring quality of the new ultralight pieces: They create a distinct impression when you pick them up for the first time—and an even greater one after they are worn for an extended period. “The main thing about it is that it is extremely wearable because it’s very light—only 30 or 40 grams with strap and buckle—and because we worked extensively on ergonomics,” says Sébastien Chaulmontet, head of innovation at the revived Angelus brand, of the company’s just-released ultralight skeleton U40. “And because it’s titanium, the only people who really care that I’m wearing it are people in the know. It’s a totally different feeling than wearing an expensive, heavy gold tourbillon.”

“I really wanted to bring comfort to my clients’ wrists—and lightness is a part of it,” says Mille. “The problem is to go back to a heavy watch once you have experienced a light one!”