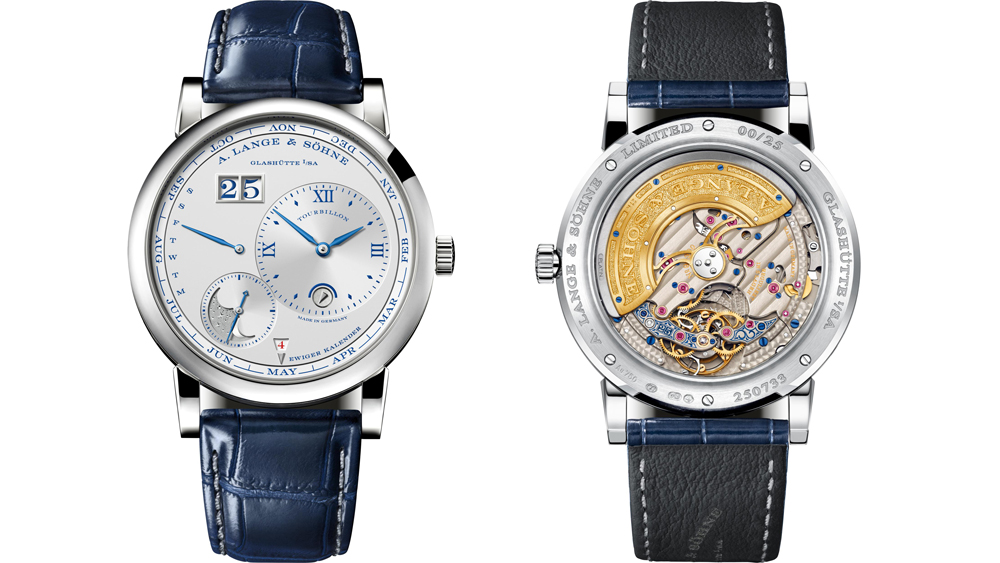 When A. Lange & Söhne started producing watches again in 1994 after a 40-year hiatus between World War II and the reunification of Germany, the first model out of the gate was the Lange 1. It represented a new beginning for the company and helped return it to its pre-war glory. It was a dream fulfilled for Walter Lange, grandson of company founder Ferdinand Adolph Lange, who set out to make what he described as the perfect watch. Its 25th anniversary is, therefore, reason enough for celebration—A. Lange & Söhne is launching a new limited-edition every month between January and October. The special editions have included a Lange 1, a Grand Lange 1 Moon Phase and a Little Lange 1. Each is made of white gold with a silver dial and blue hands and markers, in limited editions of 25.

Up this month is the 25th Anniversary edition of the Lange 1 Tourbillon Perpetual Calendar—the most complicated watch in the collection to date. It has all the signatures of the Lange 1: minimalist dial; large, double-digit date window; asymmetrical displays and a decorated movement, including Lange’s elaborately engraved balance cock.

The limited edition differs from the original Lange 1 Tourbillon Perpetual Calendar, introduced in 2012, in several ways: it has a silver dial, a hand-engraved moon phase, and blue details on the engraved rotor, balance cock and bridge, which bears the numeral 25. The 21-karat gold logo plate on the platinum rotor is engraved with the brand signature. The 41.9 mm x 12.2 mm is the same, as are the signature movement finishes, including a high polish on the upper side of the tourbillon cage and a diamond endstone bearing that secures the tourbillon.

Closeup of the balance cock and tourbillon bridge  Courtesy of Phillips

In practical German watchmaking style, the dial is reserved for timekeeping functions, including an hour and minute subdial on the upper right, a moon phase and small seconds index on the lower left, and an unconventional perpetual calendar display. The month is indicated by a rotating ring on the inner periphery of the dial. The day of the week is read on a retrograde arc at 9 o’clock. The big date, signature to several Lange models, takes a dominant position at 11 o’clock, just under the logo, while a leap year indicator sits discreetly at 6 o’clock. The moon phase will only need to be reset once in 122.6 years. The word “tourbillon” is clearly spelled out on the dial, but you have to flip the case over to see it, along with the expertly decorated movement.

It contains the Lange manufacture automatic caliber L082.1, decorated and assembled by hand and precision-adjusted in five positions. The plates and bridges are made of German silver (which is neither German nor silver: it is an alloy of copper, zinc and nickel that looks like silver and takes a high polish, and was first developed by a German metallurgist). A hacking seconds makes it possible to instantly stop the tourbillon cage with the balance at any time by pulling out the crown, so the watch can be set to one-second accuracy.

Like all Lange 1 “25th Anniversary” limited editions, the Lange 1 Tourbillon Perpetual Calendar “25th Anniversary” will be made in a series of 25 pieces. The 25 not only refers to the anniversary, but also marks the day of the month the first Lange 1 was introduced. It debuted October 24, 1994, with date displays set to the 25th so they would be current when showcased in the following day’s newspapers. It is priced at $335,800.