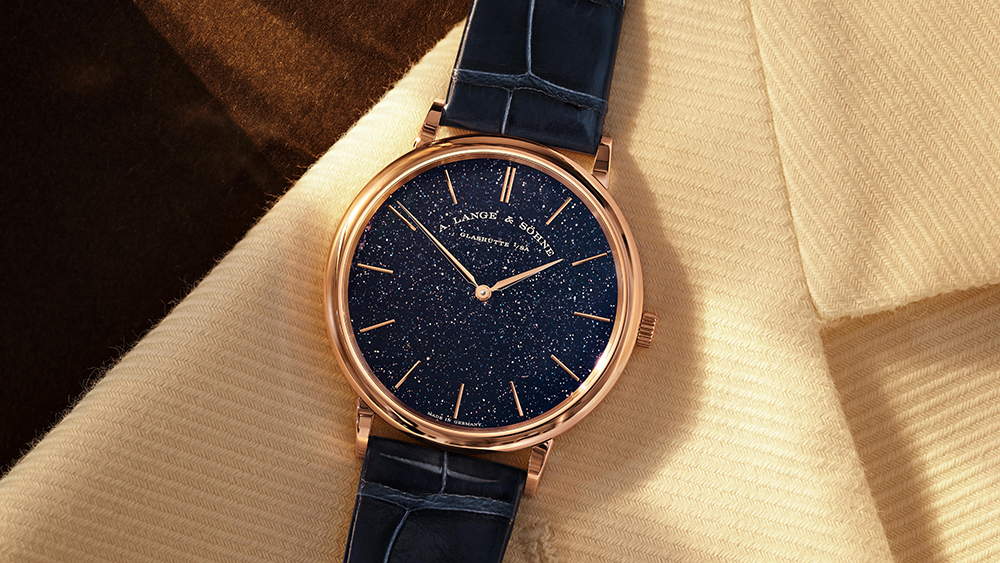 Leave It to A. Lange & Söhne to make turning 20 look more elegant than awkward.

On Tuesday, the German watchmaker debuted four new limited-edition watches, including two updates to the Langematik Perpetual that coincide with the model’s 20th anniversary. Originally released in 2001, the celebrated perpetual calendar watch is now available in pink gold and white gold cases, each with blue dials, both in limited editions of 50 pieces.

The Langematic Perpetual was the first mechanical wristwatch of its kind to combine a perpetual calendar with the brand’s signature outsize date. To further distinguish the model for its platinum anniversary, the watchmaker added a Zero-Rest mechanism and a main corrector that simultaneously advances all calendar displays. The new mechanism simplifies and speeds up the time setting for the device, giving the wearer access for these adjustments through the crown. What’s more, its bidirectionally winding rotor ensures a power reserve of up to 46 hours.

The rose gold and white gold versions of the new Langematik Perpetual watch.  A. Lange & Söhne

The watchmaker’s third release is the Cabaret Tourbillion Handwerkskunst, a lozenge-style watch so difficult to produce that it’s limited to just 30 examples.

From its rectangular case to its semi-transparent enameling and engraving on the dial, the Cabaret Tourbillion Handwerkskunst is a refined piece with that features a lot of handwork. The new model is a special version of a watch the brand released in 2008, which was world’s first mechanical tourbillon wristwatch with stop-seconds. The three-part dial is made of solid white gold, and its manually wound calibre L042.1 delivers a power reserve of 120 hours.

The final model is a redesign of the brand’s Saxonia Thin. The model’s solid-silver dial, coated with blue gold flux features tiny copper-colored particles that resemble a starlit sky. Thousands of copper oxide crystals are also embedded in the deep blue dial to reflect light. The 40mm case is only 6.2mm tall—its 2.9-millimeter calibre L093.1 movement is the thinnest movement made by the brand. But just because it’s slim doesn’t mean it isn’t powerful: the movement produces a power reserve of 72 hours.

The Saxonia Thin is now available for $27,100 and the Langmatik Perpetual is listed for $91,800. Pricing for the Cabaret Tourbillon Handwerkskunst is available upon request. Collectors can learn more about all four models now on A.Lange & Söhne’s website.