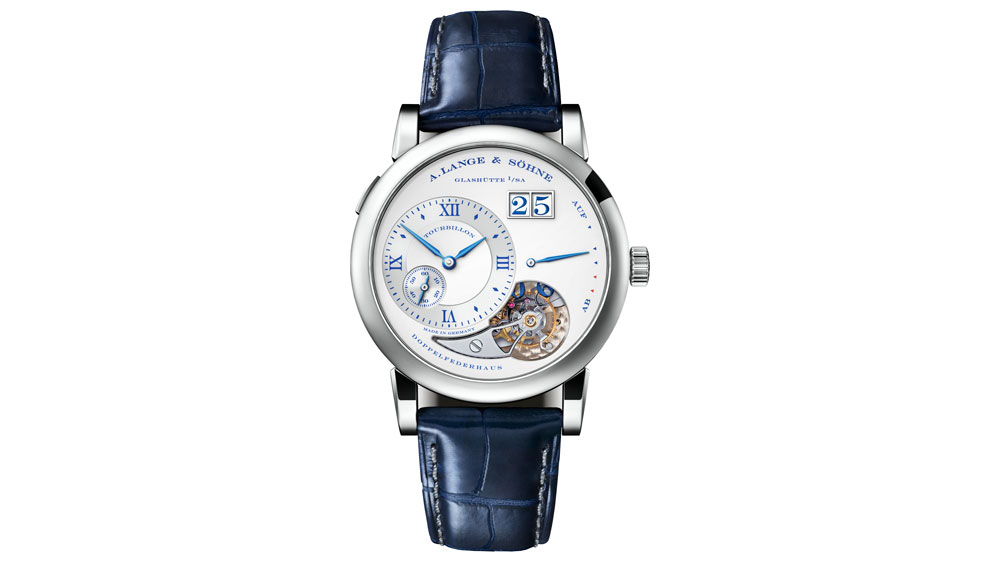 The venerated German watchmaker A. Lange & Söhne has released the tenth and final model of a special 25th-anniversary collection that highlights 10 milestones in the Lange 1 family of timepieces: the Lange 1 Tourbillon “25th Anniversary.”

Introduced in Geneva in January at the Salon International de la Haute Horlogerie, the silver anniversary collection pays tribute to the Lange 1, the model that kickstarted the 174-year-old’s brand’s comeback in 1994, when Walter Lange and his business partner, Günter Blümlein, resurrected the company. A manual-wind timepiece with an asymmetrical time display and outsize date that is today considered a contemporary classic, the Lange 1 has spawned numerous successful iterations.

Among them is the first Lange 1 Tourbillon—combining a tourbillon, an outsize date, a 3-day movement and a power reserve indicator—introduced in 2000. (Interestingly, it was not the brand’s first centennial tourbillon—Lange famously debuted a pocket watch tourbillon at the 1900 Paris Exhibition.)

Like virtually everything in the Lange 1 family of timepieces, the tourbillon model was well-received. Since 2000, two more iterations of the model have followed, including the 2010 Lange 1 Tourbillon “165 Years – Homage to F.A. Lange,” a tribute to company founder Ferdinand A. Lange and one of the manufacture’s first models to appear in its proprietary honey gold, and the 2014 Lange 1 Tourbillon Handwerkskunst, whose black enamel dial celebrated the model’s 20th anniversary.

“When we determined the sequence of launches it was clear to us that it had to be a complication,” says Wilhelm Schmid, CEO of A. Lange & Söhne. “Of the two contenders that would make an impressive finale, the Lange 1 Tourbillon was our favorite from the outset. While the other possible candidate, the Lange 1 Tourbillon Perpetual Calendar is undoubted the more complicated timepiece, the Lange 1 Tourbillon plays a more prominent role in the history of A. Lange & Söhne. The first tourbillon in a model of the Lange 1 series has only been produced in limited editions and on special occasions. In 2000, it marked the turn of the century and in 2010 our 165th anniversary in a rare Honeygold version. In a 20-piece Handwerkskunst edition with a grand feu enamel dial we used it to celebrate the 20th birthday of the Lange 1 family. Therefore, it was also our first choice to conclude this anniversary year.”

The 2019 edition of the Lange 1 Tourbillon features a blue and silver theme, like all nine previously released editions of the 25th-anniversary collection. The 38.5 mm 18k white gold case contains a solid silver, argenté-colored dial embellished with blue detailing that includes blued steel hands, blue inscriptions and numerals and blue-filled recesses on the engraving on the tourbillon cock.

Available in a limited edition of 25 watches, each priced at $166,600, the manually wound Lange 1 Tourbillon “25th Anniversary” comes on a blue or gray hand-stitched alligator leather strap with a solid white-gold buckle.