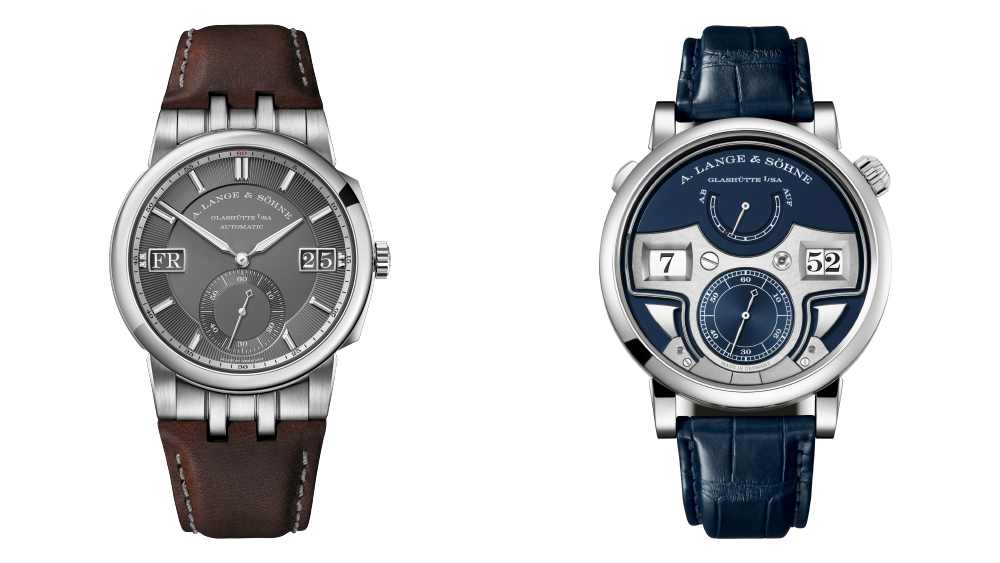 For its spring 2020 introductions, the prestige German watchmaker A. Lange & Söhne is offering two timepieces at opposite ends of its lineup: One is a new variation of its first true sports model, while the other is an ultra-complicated minute repeater. Both are united by the choice of metal—white gold—and Lange’s trademark commitment to quality.

The sport model is, of course, The Odysseus, the brand’s first serially-produced steel watch and the first model of its sixth watch family, introduced last October (exactly 25 years to the day after the brand made its contemporary debut). Lange is now producing the model in white gold on an integrated rubber or leather strap.

The Odysseus retains its signature combination of Lange’s iconic outsize date in a double aperture at 3 o’clock as well as a day display of equal size at 9 o’clock. It comes in a 40.5 mm white gold case with a gray dial and all the elegant touches fans of the brand have come to expect, such as easily readable numerals; luminous hour and minute hands and hour markers; a textured dial achieved through an embossed groove structure beneath the applied hour markers; and a balance of brushed and polished surfaces along the case and lugs.

Last but not least, the Odysseus features the L155.1 Datomatic automatic winding movement, with a maximum power reserve of 50 hours. It retails for $40,600.

At the other end of Lange’s range, you’ll find the new Zeitwerk Minute Repeater, now available in white gold.

The model traces its roots to the original Zeitwerk, introduced in 2009 to great fanfare. Seen as contemporary and iconoclastic yet still classic, the timepiece—distinguished by a mechanical jumping numerals display—has spawned numerous iterations, including, in 2015, its first minute repeater. Until now, the model has only been available in platinum.

Now offered in a 44.2 mm white gold case, the minute repeater differs from traditional models in that it strikes the time at 10-minute intervals instead of quarter-hours. Once the wearer depresses the repeater pusher at 10 o’clock, activating the striking mechanism, the time that is displayed on the dial is communicated via gongs that generate a harmonious range of tones.

“At 7.52, for instance, the gong hammer on the left strikes the low-pitched gong seven times, once for every elapsed hour,” according to the press release. “Then, five double tones are struck for the elapsed 10-minute intervals, followed by the right-hand hammer with two high strikes, one for each elapsed minute.”