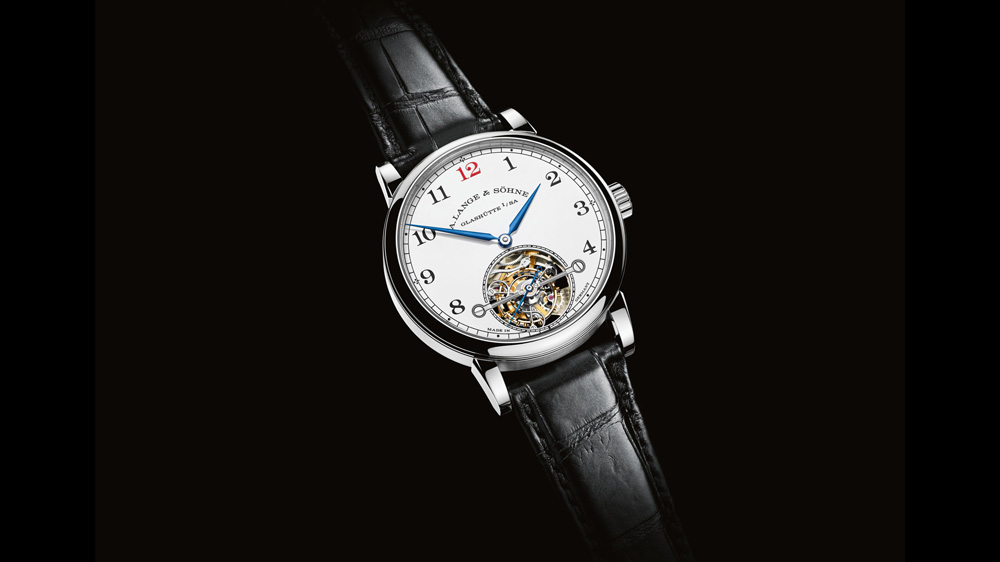 The German watchmaking business A. Lange & Söhne has had a fascinating roller coaster of a history. Ferdinand Adolph Lange founded the company in 1845, but it was expropriated after WWII when the Soviet Union nationalized the industry. The story has a happy ending—or at least a happy middle—though: Lange’s great-grandson, Walter Lange, revived the family’s brand in 1990. Then, just four years later, the company patented a groundbreaking invention—the first wristwatch to combine a one-minute tourbillon with a fusée-and-chain transmission in the Tourbillon “Pour le Mérite” timepiece. That watch, of which only 200 models were created, has fetched upward of $250,000 at auction (it was €75,000 when it first launched).

Ever since, the watchmaker has been working on refining its tourbillon creations. In 2000, A. Lange & Söhne debuted the Lane 1 Tourbillon, which was the first wristwatch with a tourbillon, an outsize date, twin mainspring barrels for three days’ power reserve, and a progressive power-reserve indication. In 2005, it launched the Tourbograph “Pour le Mérite,” which combined a split-seconds chronograph with a one-minute tourbillon and a fusée-and-chain transmission. In 2014, its 1815 Tourbillon introduced a new system that combined the stop-seconds mechanism for the tourbillon with a patented zero-reset mechanism. When the crown of the timepiece is pulled out, the movement resets the seconds hand to zero and stops the tourbillon. That’s the kind of serious watchmaking that keeps A. Lange & Söhne at the top of collectors’ lists.

Today, the watchmaker has introduced a new version of its 1815 tourbillon with an enamel dial ($197,200), coming in a hefty platinum 39.55 mm case that is 11.3 mm thick. The addition of the enamel dial adds a noticeable 0.2 mm in height and was used to accent Lange’s classical design, featuring Arabic numerals, a chemin de fer minute scale, and blue steeled hands, which was inspired by a pocket watch from Lange’s archives. The smooth enamel dial work takes several days in a process that must be repeated over and over—if even one small particle of dust touches the dial, it can be marred and rendered unusable. The red 12 on the dial must be imprinted separately. Lange also managed to perfectly fit the tourbillon’s bridge into the enamel dial.

Like most of Lange’s pieces, the movement is as beautifully finished as the timepiece’s exterior. The new enamel 1815 Tourbillon’s L102.1 hand-wound movement, which can be seen through the caseback, features handcrafted silver plates with expert decorative finishing. Only 100 of the new 1815 Tourbillon in Enamel have been created, and despite its steep price tag, word has it that collectors have already come calling.