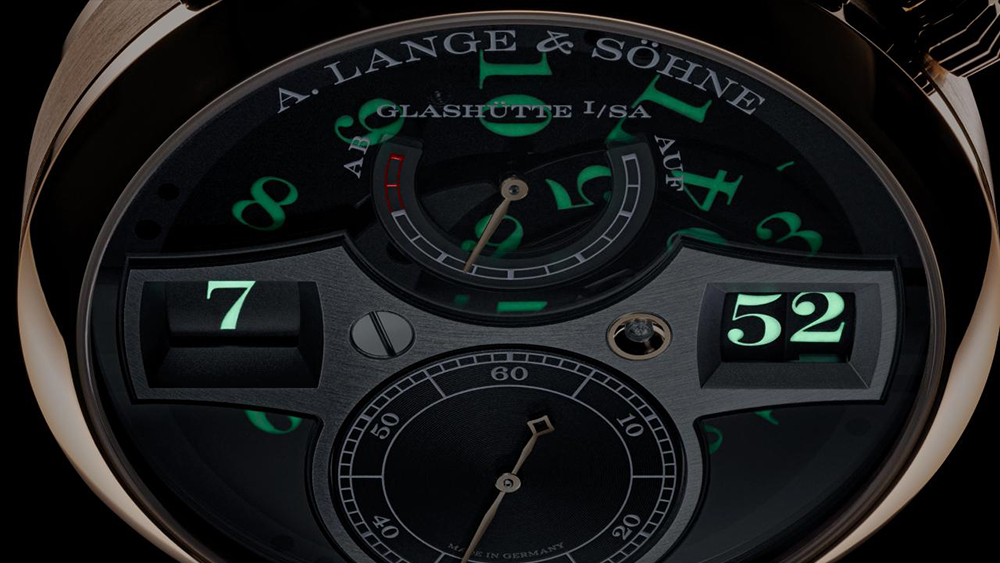 A. Lange & Söhne combines three of its coolest features in the new Zeitwerk Honeygold Lumen, which gives it a greatest-hits-in-one-watch quality.

The digital time display, with jumping hour and minutes stretched across a “time bridge” on the dial, is the salient feature of the Zeitwerk. It was launched in 2009, and has since become a fan-favorite that in some ways defines the brand. It operates via three disks, one for hours on the left, and two for minutes—units and tenths—on the right. The small seconds occupies a subdial at 6 o’clock.

Honeygold is the brand’s proprietary gold alloy, with a dash of copper and zinc and perhaps other secret ingredients that give it a warm, honey brown color that reads more subtle than traditional yellow gold. (Lange says the alloy is twice as hard as platinum and therefore highly resistant to scratches and damage.) Lumen refers to the Super-LumiNova on the numerals of the hour and minute disks. What differentiates it from other luminated dials is that even the numerals not showing the current time can be seen through the sapphire crystal, because it has been tinted in just the right hue to let in light to power the lume. So while the current time is well lit, and you can also see the other numerals on the time disks glowing under the crystal. The concept has already been applied to other models in the Lange lineup, including the Grand Lange 1, the Grand Lange 1 Moon and the Datograph Up/Down. It was used on the Zeitwerk before, in the 2010-released Zeitwerk Luminous—which now is called Lumen—but never before in a Honeygold case.

It also contains a new movement, the caliber L043.9, with two mainspring barrels that double the previous power reserve from 36 to 72 hours. A new pusher at 4 o’clock on the case side drives a sophisticated mechanism that simultaneously switches all three time disks, which means the hour indication can be adjusted switched separately. The switch happens uniformly, regardless of how gently or vigorously the pusher is actuated, because it is controlled by a constant-force escapement, which also assures the balance is always driven with constant power for better rate stability. The new 4 o’clock pusher means the crown has been re-positioned between 1 and 2 o’clock.

The new Zeitwerk is now one of a dozen Lange & Sohne models that have come out with cases made of honeygold, which the brand has been using since 2010. They have all been limited to between 15 and 265 pieces, with most being issued in quantities fewer than 200.

Even if you just saw the back of the watch, you’d know it is an A. Lange & Sohne because of its distinctive three-quarter plate finished with Glashütte ribbing (also known as Geneva stripes) and the engraved balance cock. The case measures 41.9mm x 12.6mm thick. The Zeitwerk Honeygold Lumen celebrates the 27th anniversary of when Lange & Sohne re-opened for business in October 1994, after a 40-year hiatus. It is limited to 200 pieces, priced at $145,000.