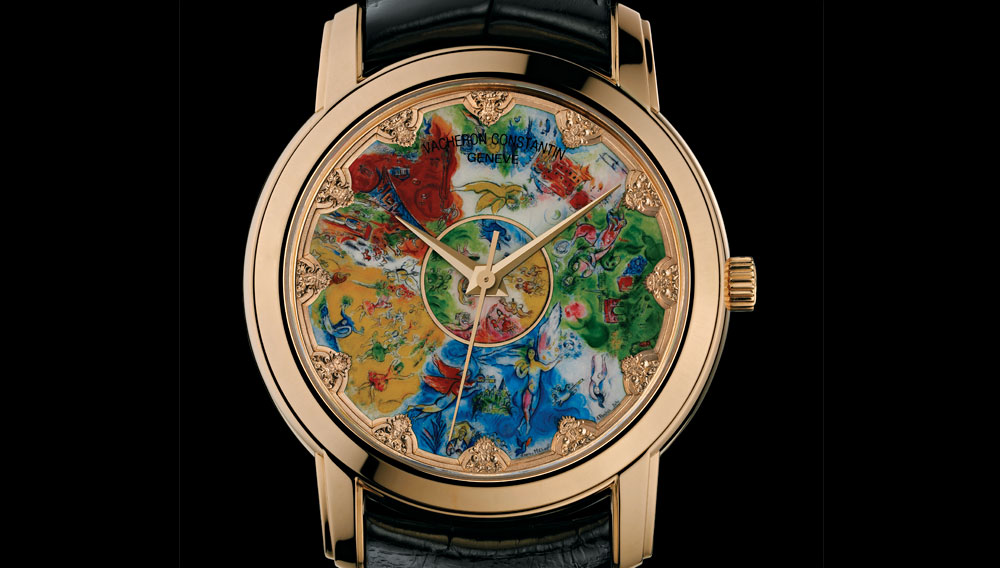 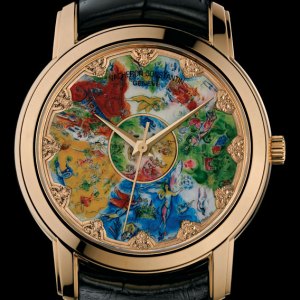 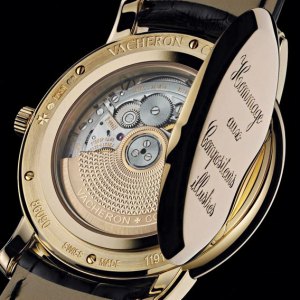 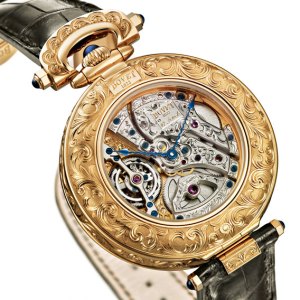 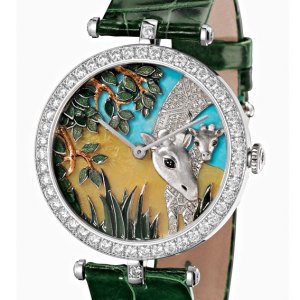 At one time, the most impressive feature of nearly every coveted timepiece was the decorative art it showcased. During the 17th and 18th centuries, in the period of Geneva’s “Fabrique” watchmaking collective, the work of a talented enamelist—someone who creates miniature paintings in enamel—added far more value to a timepiece than did any of the relatively unreliable mechanisms of the time. But as mechanics improved and watches found an audience beyond the sophisticated, art-loving aristocracy, the importance of these disciplines declined to the point where they became mere specialties.

But as the demand for mechanical watches revived in the early 2000s, and unusual designs and intricate complications proliferated, a number of companies turned—or returned—to decorative arts to distinguish their brands from others. The result was the release of timepieces such as those in Corum’s Artisan collection, a limited series of themed pieces that featured such unusual decorative-art pairings as miniature lacquer painting and engraved mother-of-pearl.

Among the other companies employing decorative arts as a component of their brand identity is Delaneau, a small women’s-watch firm in Geneva that adorns the dials of its top pieces with enamel paintings. Though the company produces only a limited number of watches, it employs in-house enamelers who work out of the brand’s atelier in Geneva’s Vieille Ville, where the artisans refine their skills for this exacting craft.

“It is not enough today to display technical skill alone,” says Pascal Raffy, CEO of Bovet Fleurier, which is located in the Swiss town of Fleurier along the spine of the Jura Mountains north of Geneva. “To truly create luxury, you must have art.”

Raffy, who has helmed Bovet for the last decade, is expressing a thought that many of his peers in the Swiss watch industry share. As a result of this mind-set, artisanal watches—timepieces adorned with the traditional decorative arts of engraving and miniature enamel painting—are making a comeback. This renaissance has prompted a spike in the number of artisans practicing these once endangered crafts while also spurring unusual collaborations and mixed-media projects. In addition to revisiting the traditional decorative art forms, companies are delving into disciplines such as marquetry and Japanese lacquer, which have little historical precedent in Swiss watchmaking.

Bovet has expanded its use of Fleurisanne engraving, a local style that features more swirls than the engravings produced at Delaneau and other Geneva companies. “When I started with Bovet we had one engraver, and now there are six,” says Raffy. “Much of the work is negative engraving [in which the material around the pattern is removed] and is much more difficult to perform [than traditional engraving].”

Bovet watches also are renowned for their miniature lacquer paintings, which are created by Andre Martinez. After working for a number of other brands, including Corum, Martinez now practices his craft only for Bovet, where he fashions custom dials and does the detailing on the brand’s new Ladies Touch watches and select other pieces.

In the last few years, perhaps no other company has benefited from and furthered the interest in decorative arts more than Van Cleef & Arpels. Once known almost exclusively for jewelry watches, the company has steadily built upon a style it introduced in 2006 with the Centenary Watch. The timepiece features a circular enamel painting that depicts each of the four seasons and rotates an entire turn over the course of a year. The brand’s subsequent collections exhibit qualities that have changed the very nature of artisanal watches and the way they are perceived. Unlike traditional artisanal watches that display the work of a single craftsman, a Van Cleef & Arpels timepiece can combine a variety of contributions from different disciplines. For example, the African Landscape collection ($97,000), one of several new lines introduced this year, is fitted with dials depicting scenes rendered in enamel, engraving, marquetry of stones, and jewelling, each of which is completed at a different atelier.

Van Cleef & Arpels’ contributors tend to play an unusually active role in the creative process. Instead of only taking direction from the company, they sometimes act as consultants, suggesting new approaches to enhance a design. Consequently, some of these artisans—including enamelist Dominique Baron and engraver and marquetry specialist Olivier Vaucher—have achieved a level of name recognition once reserved for star watchmakers. Some collectors can look at a dial and identify it as one of Baron’s in the same way art connoisseurs can recognize the works of particular artists.

Baron and Vaucher, in particular, also have altered the paradigm of the artist working in solitude. At Stern Creations, the dial manufacturer owned by Van Cleef & Arpels’ parent company, Richemont, Baron has trained a handful of young enamelists, enabling them to add the same artwork to small series of pieces. Vaucher’s numerous employees provide a similar capability.

As might be expected when a new approach achieves success, some traditionalists gripe about such multiartisan production methods, claiming, among other charges, that some of the enamel is not fired as exhaustively as Geneva technique prescribes. But what smacks of industrialism has actually widened the audience for artisanal timepieces by increasing their availability.

Vacheron Constantin, which has been one of the most influential proponents of artisanal watches since releasing its enameled Mercator watches of the mid-1990s, stands to reap great benefits from the current upswing. Yet, as a company that draws prestige from its heritage and tradition, it cannot afford to have the quality of its pieces questioned because of the quantity produced. “Once we work with some of these crafts, we have to pursue them at the very highest level, which is something of a constraint,” explains Christian Selmoni, Vacheron Constantin’s creative director. This year Selmoni took no chances with quality by engaging enamelist Anita Porchet, watchmaking’s most celebrated artisan.

Porchet exemplifies how the artisan behind the watch can be its central attraction. In the last 10 years she has become the preeminent enamel miniaturist while also mastering other techniques. Because of her numerous high-profile projects with a variety of brands, she has greater name recognition than any other artisan ever, and she can pick and choose the projects on which she works.

“Anita thought our idea of re-creating the Chagall painting on the ceiling of the Garnier opera house in Paris would be a great challenge,” says Selmoni. “When she presented us with the dial for the first piece, there was silence in the room for quite a long time.” This one-of-a-kind watch is the first of a 15-piece collection that will render details of Marc Chagall’s brightly colored modernistic tribute to composers, dancers, and actors.

Similarly,Vacheron Constantin has added a world flavor to its Métiers d’Art watches in recent years, as exemplified by a collaboration with Japanese lacquer specialists Zohiko and by the highly regarded Masques collection, which features engraved renderings—created at Olivier Vaucher’s workshop—of tribal art from Geneva’s Barbier-Mueller Museum. Although independent artisans are responsible for much of the brand’s high-profile decorative-arts collection, the company does employ a staff of in-house engravers, enamelists, and guilloche artists who spend an increasing amount of their time on custom orders.

Bespoke watches such as those created by Vacheron Constantin’s artisans are growing more popular with collectors. Like a specially made movement—but usually at a lower cost—a customized artisanal treatment represents a chance for a collector to interact with the creative talent and contribute to the finished work.

Independent artisans also are taking up the practice of producing custom watches, though on a limited basis. Kees Engelbarts is one such engraver. He performs work for a number of brands while also creating his own line of watches featuring dials engraved with elaborate images of dragons and other mythological figures. The watches have long been favorites of collectors in East Asia, but the attention Engelbarts receives for his work with the watch brands is increasing the popularity of his own dials in the Western world.

Watchmakers have always wanted to have their timepieces regarded as works of fine art and to be celebrated accordingly. While the contributions of Engelbarts, Porchet, Baron, Vaucher, and other artisans have yet to elevate mechanical watches to such a lofty classification, they are endowing them with style, personality, and uniqueness—qualities that characterize fine art.