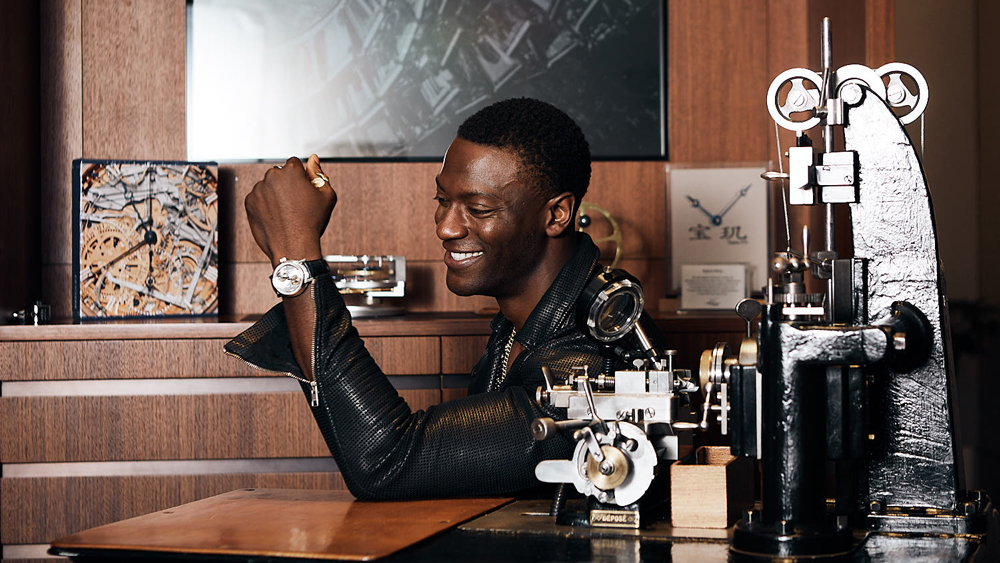 The Horological Society of New York, a 154-year-old non-profit organization in New York City dedicated to watchmaking enthusiasts and experts, just got some serious star power to add to its roster of leaders. Actor Aldis Hodge, known for his starring roles in City on a Hill, Brian Banks and Clemency, has been appointed to the HSNY’s board of trustees. He is, without a doubt, the organization’s most famous member and he is now bringing his influence to drive the organization in new directions for 2020 and going forward.

“There was a certain validation I felt being invited to join such a prestigious and experienced group,” Hodge told Robb Report. “I see it as an affirmation that I’m walking down the correct path on my horological journey.”

In addition to major appearances on the big-screen, Hodge has somehow found the time, in the midst of a skyrocketing Hollywood career, to become a self-taught horologist. And he’s already walking Switzerland’s red carpet after a recent induction into the academy of the Grand Prix d’Horlogerie de Genève, the Oscars of watchmaking. On top of these accomplishments, he is currently at work on his own watch brand and it’s anything but a vanity project; Hodge has serious watchmaking knowledge to back up his designs (his hand drawings rival some computer renderings we’ve seen on the monitors of Switzerland’s greatest watchmakers) and counts lauded watchmaking veterans like Roger Smith and Robert Greubel of Greubel Forsey among his mentors.

“When I was a little poor kid I was inspired by engineering, and it pushed me to pursue  my dreams,” Hodge, who spent parts of his early years growing up homeless in Brooklyn with his brother, sister and mother, told Robb Report last year. “I want my company to inspire others, who may not have the means, to use their minds to achieve what they want and believe in themselves to accomplish a seemingly impossible feat.”

Aldis Hodge at an HSNY Lecture  Courtesy of HSNY

Hodge says his interest in watches first led him to the HSNY in the early 2000s. “I took their classes for watch movement disassembly and reassembly,” says Hodge. “I attended the meetings and heard some of our greatest living watchmakers speak and I’ve been able to expand my watchmaking community through meeting and connecting with the other wonderful members. All of these steps eventually led up to me receiving my membership in 2016.”

Hodge fit volunteer hours into his hectic schedule to help the organization deliberate over big picture ideas from proposals to debates and budget approval. Now that he’s on the trustee board, he also wants to help usher in a new generation of young watchmakers and enthusiasts. “I believe HSNY will be instrumental in helping to mold the minds of some of the next era’s great horologists, influence a new generation of collectors and help support the resurgence of horological manufacturing here in the USA,” he says.

The organization has already been growing rapidly in recent years. The digital age, ironically, has led to a boom in interest in the ancient art of mechanical watchmaking. Nicholas Manousos, the former president of the HSNY who was just appointed as its executive director, said that when he first joined the society 7 years ago he remembers attending meetings that had just between 10 to 15 people. Anyone that has been to a recent event at HSNY will know that it’s now a packed house. “We have just over 1,000 members worldwide and besides are actual members we have huge numbers of people that follow us and take our classes and come to our lectures,” says Manousos. “There are students that receive our scholarships and working watchmakers that receive our financial assistance.”

While in-person events have been put on hold for the foreseeable future as the world tries to wade through the perils of the Covid-19 pandemic, HSNY will still be restarting its lecture series in September through Zoom webinars and their virtual watchmaking classes, which Manousos says have been a hit. Hodge says he is personally looking forward to an upcoming lecture by watch historian and expert, Jeffrey Kingston, whose previous talks have drawn sizeable attendance.

“We’ve all put a lot of time in behind the scenes to develop a lot of the projects and initiatives of the society as much as possible over the past 7 years and the success has really been remarkable,” says Manousos. “It’s really nice to see where it’s at right now.”