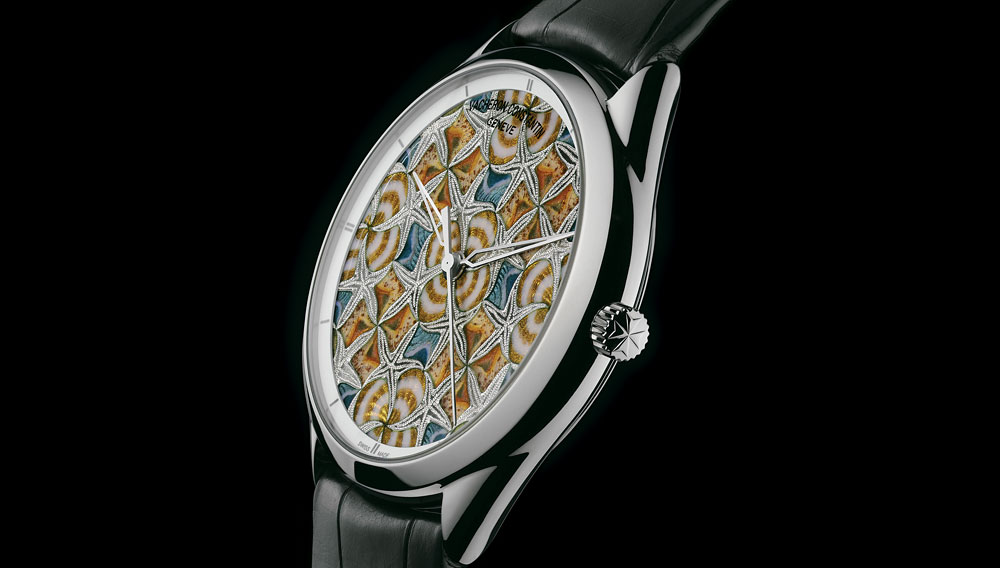 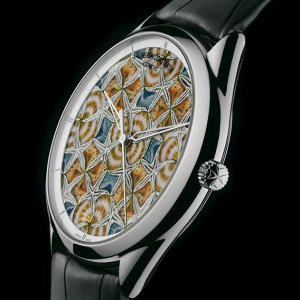 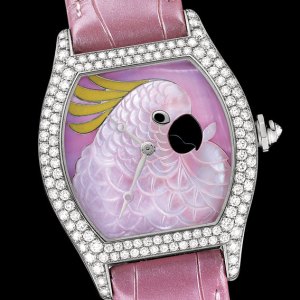 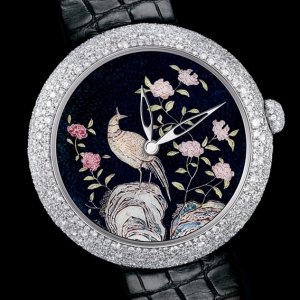 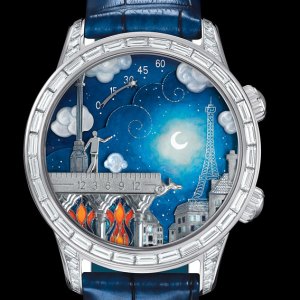 All the traditional decorative arts in watchmaking—engraving, guillochage, enameling, and jeweling—have been mixed together freely since the birth of the craft. In fact, it was during this early period in the 17th and early 18th centuries, before most major advancements in movements took place, that decoration was regarded as the preeminent skill in watchmaking. Artisans at the watchmaking centers of the period, like Geneva’s Fabrique, frequently mixed enamel with diamond or pearl settings and with both hand and engine engraving.

But as all these skills began to gradually fade in succeeding decades, fewer and fewer of them were used in tandem. The remaining artisans, especially those who continued to practice in the 20th century, increasingly did so in isolation—paranoid, in some cases, that their skills might be appropriated. Pieces featuring multiple techniques became rare in the extreme—the proverbial coal-mine canaries of the dying arts.

Happily, such work has begun to reappear, in a sign of renewed artisanal activity. In the modern era, Vacheron Constantin has been an early leader in marrying enamel techniques with unusual time displays, beginning with its 1990s Mercator watches and more recently in the Métiers d’Art Explorers series. These, in accordance with common practice in the watch industry, were made with the help of independent artisans. But in recent years, Vacheron Constantin has built its own team of artisans in the major skill areas, largely to feed its custom watch business. This year the team has collaborated on a series of watches called Les Univers Infinis that feature dials based on the tessellated patterns explored by M.C. Escher. The dials combine areas of guillochage, setting, champlevé, and painted enamel into an integrated whole.

Cartier also has built a significant in-house capability to produce many of its artisanal timepieces, which are sometimes augmented with exotic techniques, such as mosaic and straw marquetry, used in other crafts. These art forms are often combined in this highly limited production. This year, for instance, a full pavé Tortue case was used to house an unusual depiction of a cockatoo in carved mother-of-pearl with highlights in champlevé enamel. The color achieved by the combination of these methods adds both verisimilitude and drama.

The appeal of decorative arts has expanded well beyond the core group of companies with historical legacies in the area. Chanel is one such newcomer that has aimed for the top of the talent pool. Intending to translate a piece of its own artistic patrimony into watches, Chanel commissioned Anita Porchet to create a series of 10 enamel dials depicting the Coromandel screens in Coco Chanel’s Paris apartments. Porchet currently represents the pinnacle in watchmaking’s traditional decorative arts: she is the most highly acclaimed practi-tioner of miniature enamel painting, which is still regarded as the most difficult and prestigious of the crafts. But while many watch companies (and Porchet’s clients) house work of this caliber in relatively sober cases, Chanel surrounds its Coromandel watch dials with a broad lip of pavé diamonds, making the pieces creatively distinctive and unmistakably feminine.

Perhaps no company has been more influential in the growth of mixed-media watches in recent years than Van Cleef & Arpels, because the use of these crafts has propelled the company from being one with just a small foothold in watches to its current position as a creative leader in the visual arts. Crucial to its rise are its relationships with expanding artisanal firms like Olivier Vaucher and the enamel workshops of dial maker Stern Creations. These companies are adapting the once individually practiced arts to small-series production. Depending on your perspective, the trend represents either a creeping industrialization of these arts, or a flowering of a kind that has not been seen in almost 300 years.

For its part, Van Cleef & Arpels has managed to continue its trajectory with an ever more complex collaboration between its contributing craftspeople. This year’s Poetic Wish minute repeater combines a sophisticated combination of visual arts with a complicated movement fitted with automata. Independent watchmaker Jean-Marc Wiederrecht stretched himself into new disciplines to provide the internal wizardry for the timepiece. The complex dials, created with engraving, miniature painting, engraved mother-of-pearl, and diamond settings, are designed to tell a story. Even the automata—human figures, a kite, and a shooting star—are decorated and move in conjunction with the repeater chimes.