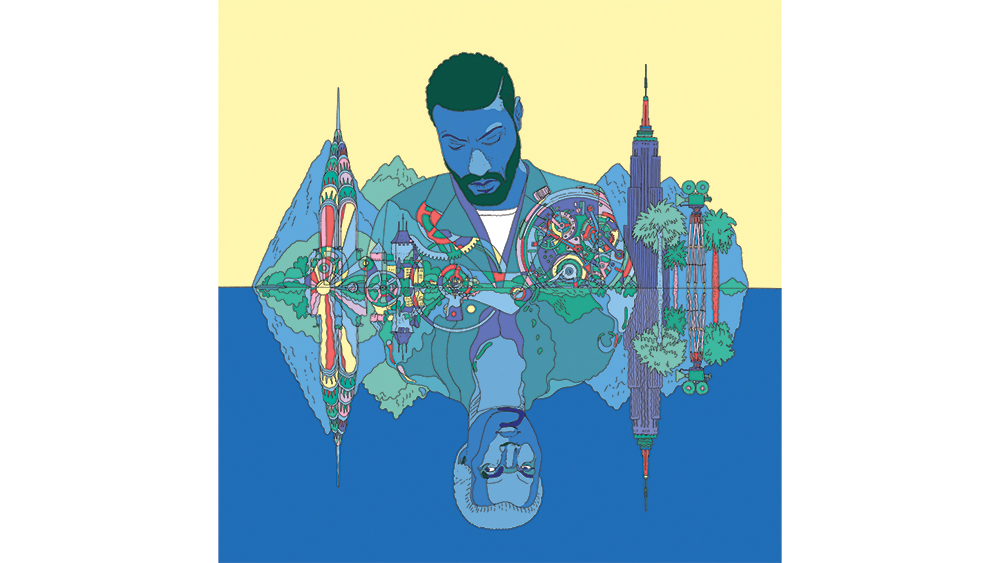 As someone on the verge of closing in on what has been a 16-year-long pursuit of a dream, I must say that my excitement comes in the form of a renewed sense of responsibility.

The launch of my watch brand, A. Hodge Atelier, inches closer every day as my manufacturing partner completes the final stages of R&D. The plan is to release my flagship timepiece–a jump-hours model with nontraditional movement composition—later this year.

I’ve thought about this moment every single day since I sketched my first watch. Granted, the tasks currently taking up most of my time are finalizing packaging designs, orchestrating my distribution strategy, sewing together a sales team, etc. All of the usual suspects to address when launching a company. But I can’t help but reflect on the early days of when and how I started my journey into the world of haute horlogerie.

Many people who know me know my love of designing watches was born out of my passion for designing cars and architectural blueprints when I was 19 years old. I was living in Los Angeles at the time and didn’t have any local educational resources regarding horology available to me, so I consumed as much as I could about the profession on my own. I studied the DNA and histories of brands. I bought every book possible, such as George Daniels’s Watchmaking and Claudius Saunier’s Treatise on Modern Horology. I even purchased books I couldn’t read yet because they were written in French, such as Traité de Construction Horlogère. I began teaching myself the language to continue gaining knowledge.

I underwent an apprenticeship with a good friend who is a technician for Vacheron Constantin. He taught me how to approach servicing a watch. Lessons started with sharpening and preparing my tools. I learned, as with any other tactile trade, that the quality of your work can be heavily dependent upon the quality of your tools and how you maintain them. I spent time working at a jewelry factory where I used CNC machines to practice fabricating watch parts (dials, plates, bridges, etc.). I bought lathes, guilloche machines, tools—all of it. I purchased wristwatches and pocket watches (like my vintage Pallweber jump hours) to learn the differences in technique, application and finishing firsthand, since I couldn’t spend time in watch factories. I’d attend collector-group meetups all over the world to understand the truly avid collector and their needs. All the while, I was trying to work in the field, designing concepts that I’d submit to brands, which would often be rejected. I would hunt for classes, which is how I was introduced to the Horological Society of New York (HSNY)—the wonderful team there gives lectures and offers classes on disassembling and reassembling watch movements. The experience I gained was essential.

The value of attending those lectures extended beyond education. I was able to cultivate friendships and encouragement for my efforts to pursue horology. One key figure was Nicholas Manousos, the society’s executive director. I bent his ear many times over the years as I continued to design and create, and he’s always been supportive—of even some of my craziest concepts. More valuable than the support for building my company has been his understanding of my mission with my work.

With every professional endeavor, I aim to leave behind open lanes of opportunity that I never had for the generation that comes after me. My entire venture into watchmaking was spurred by my passion to represent the true brilliance of my culture through art, science and design, as well as help others like me see that we belong in spaces where we are often excluded or disregarded.

So when Nick pitched the establishment of the Benjamin Banneker and the Oscar Waldan scholarships to join HSNY’s current roster of financial-aid opportunities, I wasn’t surprised.

Both scholarships were created to foster opportunities and support for the Black and Jewish communities, both of which we felt were being overlooked. Monetary aid is given each year to watchmaking students to help with expenses like tuition and tool costs. We wanted to reach out to those we believed were underserved and let them know we see them. As someone who’s self-taught and self-funded, I greatly appreciate being a part of an initiative that will help give future horologists a smoother road to travel than I had.

Which leads me to the point that I’ve been invited here to discuss. When Robb Report asked me about my thoughts on the lack of inclusion and diversity within the watch industry, I took a moment to consider all the other times I have been asked, why it seemed as if I was the only one being asked and why it was always a tough question to answer. Though I appreciate the inquiry, I’m not the right person to ask, because I didn’t create the disparity. I am the result of it.

You see, in cases when there’s a lack of opportunity as it relates to inclusion for the BIPOC community, open doors don’t exist for us. Our only options are to either build the door or be the door. I can gratefully say that I’ve worked myself into a position to do both via my involvement with HSNY and the charitable work we continue to do, as well as the founding of my boutique haute horlogerie brand.

Certainly, I’m aware of the lack of BIPOC faces in the spaces I often occupy. Whether it’s in a watch factory or any one of the many entrepreneurial territories I’ve explored, the lack of diversity has to do with many factors that sit in plain sight yet continue to go unaddressed by the groups responsible for handling them. It should also be taken into consideration that it’s mentally and emotionally taxing when the recipients of the inequities of exclusion are asked to explain why they are being excluded.

It can be equally disheartening when you do enter these spaces and are constantly reminded that you are foreign to everyone who’s already there. Often when I tell people what I do, they are shocked to see a Black watchmaker. Not an American watchmaker. Not an independent watchmaker presenting a new innovative idea. The surprise is always tied to the color of my skin and is usually followed up with alienating questions around said curiosity.

I’m just a man who enjoys making watches, and that is what I will continue to focus on. I’m not bringing my color to the table. I’m bringing culture—design history, theory, academia, geographical influences, perspective and so on.

Recognition of the need to expand opportunities and the responsibility of actively seeing those who feel invisible is a key part of the evolutionary process of tackling a subject as broad as diversity. Sometimes these motives are met with opposition from privileged or prioritized groups who feel that building equitable avenues for disadvantaged people, poor people or marginalized populations means that they, themselves, would receive less opportunity. This very perspective is what converts into closed doors. But those groups who are opposed to addressing these needs should understand that increasing opportunity for the ones who don’t have it doesn’t translate to a decrease in opportunity for those who currently do. There’s always been enough room at the table for everyone to eat. So for those of us in advantageous positions to meet the full potential of our power to create change, it really does start with providing pathways for ones who need it but have never seen it.

That is what I mean by “build the door.” The HSNY saw a need, addressed it by creating initiatives and in doing so is meeting its mission to advance the art and science of horology. Along with the assistance of our fellow HSNY trustees, we’ve now opened countless doors for many minds with great potential with those scholarships. In 2022 we continue pushing forward with the Grace Fryer scholarship for female watchmaking students. We’ve now been able to introduce new avenues of subsistence for a fresh culture of watchmakers, and this is the value we always aim for with the work we do.

The culmination of horology has always been a universal mix of ideas that have compounded through the ages, but for sufficient change in this industry to be made, one has to acknowledge the diversity that has always been there but is rarely addressed. Numerous diverse cultures have strong histories within horology, yet they aren’t often recognized in normality. I adopted the mission of being the representation that helps people normalize seeing others like me in such a space—inspired by others who’ve also carried that mantle, such as Benjamin Banneker, a man who truly embodied “being the door.”

Banneker was a self-taught physicist, farmer, astronomer, accomplished author who produced numerous almanacs of his studies and horologist. He built a striking clock, believed to be the first produced on American soil, completely out of wood. It functioned precisely until it was lost to history in a fire many years later. At the behest of Andrew Ellicott, Banneker integrally aided in completing the development of Washington, DC, after the original planner, Pierre Charles L’Enfant, was relieved of his position by George Washington. Banneker was initially brought in to survey the capital by establishing boundary points based on his calculations and make astronomical observations to determine starting points. After being fired, L’Enfant took his plans with him, however, Banneker claimed he could reproduce them from memory—which is just what he did. He was pivotal in saving the construction of the capital.

One could argue that without his major contributions to this country, our federal capital would not have been completed. He had to do as much as he could to disprove the ridiculous notion that Black people were not capable of intelligence—a point he lobbied to Thomas Jefferson in an effort to persuade him to change his deplorable views on Black people and his justification of enslavement. Banneker had to be the door. In many ways, his legacy continues to be one.

My version of building and being the door is creating companies—A. Hodge Atelier, 9B Collective, Hodge Brothers Productions and so on—that can provide professional opportunities for the BIPOC community and can support and develop educational initiatives for academically underserved children. I continue to align myself with organizations that have clear agendas for cultural advancement, such as HSNY, and I continue to speak out to educate others while simultaneously continuing to learn about how to properly address these issues so real progress can be achieved.

I encourage and challenge everyone to seek to be the solution. It’s not enough to ask about the issues. You must ask with intent to act—be the answer to the problem you’re inquiring about. As of late, many people have asked me about inclusion and diversity because they’re simply curious or because it’s a trendy topic at the moment, but they don’t truly care about the problem. Their interest can then be misconstrued as unkind or cruel because my answers serve only as entertainment instead of valuable knowledge.

So I ask anyone reading this: What do you think are the problems at the base of a lack of inclusion and diversity in all sectors, all industries? And what are you willing to do to solve the problem?

Aldis Hodge is an entrepreneur, watchmaker, executive producer and actor. Season three of the Showtime series City on a Hill and his new film, Black Adam, will debut later this year.