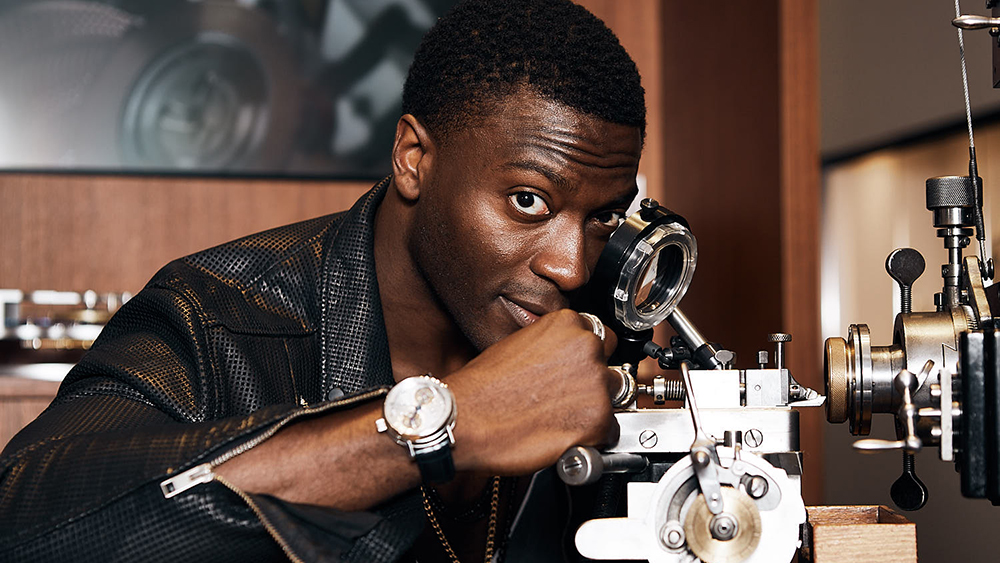 It’s been a huge year for Aldis Hodge. The 33-year-old actor landed a coveted lead role alongside Kevin Bacon in the Matt Damon and Ben Affleck–produced Showtime crime series City on a Hill, starred on the big screen in the film Brian Banks (about the footballer and former NFL hopeful’s wrongful conviction) and will play Anthony Woods in Chinonye Chukwu’s death-row drama, Clemency, due out in December. It’s not easy material, and it requires an actor like Hodge, who isn’t just playing a part but is invested in how his roles will affect the audience long-term, to pull it off. “I try to go after roles that serve a certain purpose,” he says. “These roles speak to me in a specific way, and I hope they have the chance to do some good. Culturally, I hope I can hit the mark.”

Time has become precious for Hodge, so it’s fitting that in the free moments he does have, he’s developing his passion for watches. But he’s not just another celebrity with income to splurge on a vanity collection—Hodge is a bona fide, self-taught horologist with plans to launch his own watch brand. It might seem like a surprising obsession from a guy who spent some of his childhood homeless in Brooklyn, along with his brother, sister and single mother. With limited resources, Hodge committed hours sharpening his skills in the pursuit  of his passions. “When I was a little poor kid I was inspired by engineering, and it pushed me to pursue  my dreams,” he says. “I want my company to inspire others, who may not have the means, to use their minds to achieve what they want and believe in themselves to accomplish a seemingly impossible feat.”

Hodge’s intellect was destined to overcome the hardships of his upbringing. His first love was architecture and science, but he channeled his love for engineering and design into watches because it was  an interest he could develop while pursuing his acting career. “I have always been enamored by the intricacies of movements, and I’ve always wanted to build a company I could pass down as a legacy,” says Hodge.

Hodge started designing concept watches at 19, but later, in an effort to become a proper horologist, he began to teach himself to build watches to improve his designs. He even owns a guilloche machine—a tool first used by Abraham-Louis Breguet in 1786 to create the intricate designs on a watch dial. He counts on modern watchmaking masters like Roger Smith and Robert Greubel of Greubel Forsey for guidance and advice, and can recite watchmaking history, referencing model numbers and design techniques with a knowledge that would rival that of most collectors. And in a twist that suggests his life is about to come full circle, Hodge has been appointed as a judge for this year’s Grand Prix d’Horlogerie in Geneva, the Oscars of watchmaking.

He’s already laying the groundwork for his eponymous watch brand, A. Hodge, and is seeking investors to help him launch it. And when Hodge casually pulls a well-worn notebook out of his backpack to show his designs to us, it’s clear he means business. His hand-drawn sketches are so thoroughly executed that they look like digitally rendered versions from top watchmakers  in Switzerland. (He’s even worked out the mathematical dimensions in the margins.)

While the watch industry might be more comfortable with actors endorsing watches rather than making them, Hodge is coming prepared with an arsenal of impressive creations that will dispel any prejudice that might ensue from his more glamorous day job. Based on what we’ve seen, he might just make as big a name for himself in horology as he has in Hollywood.

Each watch in Hodge’s collection has inspired his future timepieces. Here’s his pick.

“I bought this because of Sébastien Chaulmontet. I like the work that he has done and the new face-lift that he gave Arnold & Son. I know Sébastien as well. He’s a really nice guy. I just respected the ambition. I think he has made something like 21 movements in under five years, which is insane.”

“This is one of the first nice watches I bought. I was just amazed to be able to have this classic in my collection. But I don’t consider myself a collector—I am a student. This is how I teach myself. I was interested in how they manipulate the case. I buy watches that will show me a new way of thinking or putting a piece together.”

“I bought this because of Daniel Roth. When he was working at Breguet, he was the first to apply a serially produced tourbillon inside a Breguet watch. All of that history ties back to the synergy of education. I was studying primarily depth and composition. This is a jumping hour with two time zones. Most people don’t see the second time zone, but it’s right there in the middle.”

“My Bulgari Papillon was inspired by Roth, but I wanted the original one, so I got the tourbillon Eight Day. This was the very first tourbillon I owned. I wanted to study the tourbillon cage and the timing of it. I’m pretty decent at timing. I can look at the repetition of a balance wheel and I’m pretty good at spotting it’s vph—the rate at which it turns.”

“Gérald Genta is a god. I bought this out of respect for him. I liked the fact that it had Genta’s name on it, an original. But I’ve always been in love with a jumping hour. It’s one of my favorite mechanisms on a watch, because of the seamless legibility. Then you have the retrograde on the minutes. I just love the way he pieced together all of this complexity into such a simple package and beautiful design.”

“Look, right now I’m saving up every chip I can to manufacture my own watches, but when I get done, this watch will be the first Breguet that I purchase for myself. The guilloche work is exceptional.”