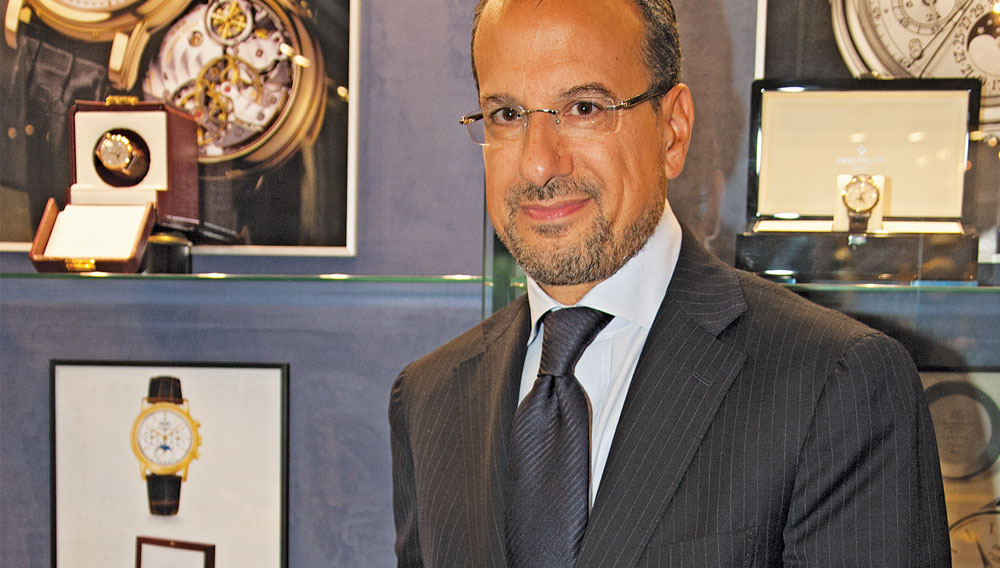 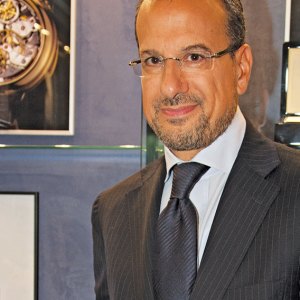 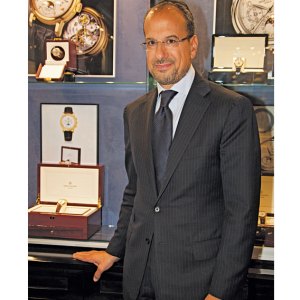 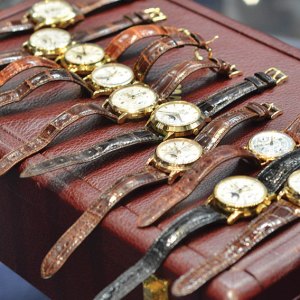 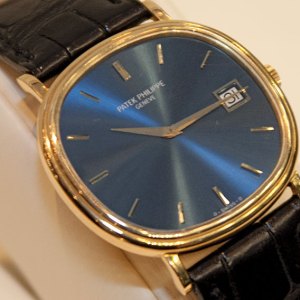 Michael Safdie’s noteworthy collection of rare Patek Philippe timepieces began with a dream for just one watch—the Golden Ellipse. With its elliptical shape, blue sunburst dial, and gold applied hour markers, the ellipse was the timepiece that graced the wrists of the young New York City art dealer’s most important clients, and it was the watch that Safdie aspired to see around his own wrist someday. “In the late 1970s, that was the watch,” the 52-year-old collector recalls. “That was the watch that was really being worn by the so-called rich and famous of that time.”

Safdie’s love of fine wristwatches began when he was a young child, and his father rewarded that passion by presenting his son with a Rolex GMT Master when Safdie was 16 years old. To this day, Safdie keeps a similar watch in his possession for active pursuits during the summer. However, the watch collector’s tastes have changed. Today, he is more discerning, more knowledgeable, and more passionate than ever before. He also has ambitious plans, both for his personal collection and for a new business venture that he’s sure will positively impact other serious collectors. When it comes to luxury timepieces, Safdie asserts that there’s only one producer at the top of the mountain, and it’s Patek Philippe.

Safdie’s story is one of perseverance and positive thinking. He grew up in a comfortable home and enjoyed a comfortable childhood, but his family’s finances shifted when his parents divorced. By the age of 13, Safdie had taken a job selling sodas at Madison Square Garden and within a few years, he had taken on additional work to help his mother pay the rent. While it was a lot of responsibility for the young man to bear, Safdie’s situation forced him to mature quickly, and that maturity allowed him to take a position working for his uncle as an art dealer.

Before long, Safdie was flying to Europe with his uncle on business, and it was on those trips that Safdie was introduced to Patek Philippe and, in particular, the Golden Ellipse. When Safdie was growing up, his mother always stressed the importance of an optimistic outlook, but she also reminded her son that appearances are a powerful thing. “My mother used to tell me to act as if it will come,” he says. “I was dealing with these [important] clients, so you have to look the part, so to speak. My mother drilled that into me.” It meant that Safdie was best served by investing in high-quality suits and other fashion accessories that would make a statement, even if those purchases were a bit impractical, given his economic circumstances. Safdie knew that only one item could really make that type of statement, so, at the age of 23, he bought a Patek Philippe Golden Ellipse.

Given Safdie’s long-standing love of high-end timepieces, it’s not difficult to predict what happened next. “I was bitten by the bug quickly,” he says.

In the years that followed, Safdie dabbled in other luxury watch brands, acquiring fine examples from producers such as Rolex, Audemars Piguet, Vacheron Constantin, and Breguet, until he bought Patek Philippe’s first annual calendar wristwatch (Reference 5035) in 1997. “It was a gorgeous watch, an innovation,” Safdie says of the first complicated timepiece that he acquired. From there, he progressed to more prestigious perpetual calendars and he says that, before long, he had lost interest in all other brands. “About 10 or 12 years ago, I cut out everything,” he says. “I didn’t wear any of my other watches. Every time I looked at my wrist, I only wanted to see a Patek.”

For collectors of high-end timepieces, the cost to acquire each wristwatch can be immense. To illustrate this fact, Safdie cites a Patek Philippe Reference 2458 platinum chronometer that (at the time this story went to press) was expected to sell for between $2.1 million and $4.2 million at a Christie’s Geneva-based auction in November. Safdie prefers not to divulge the specific amounts that he has spent or would spend for certain watches, but speaking in generalities, he says that with other brands, a $400,000 watch could be worth only $200,000 in six months’ time, whereas a Patek timepiece is only going to appreciate over the years. “When you get into Patek, you’re dealing with a commodity,” he says. “And for me, this is an investment. The reason why I am very comfortable spending large amounts of money is because it holds the value and goes up in value over the years.

“That’s the difference between Patek and any other brand,” he continues. “Nothing comes near it. Even though there are very good, very respected brands—all fantastic brands that are doing well—at this particular plateau, there’s only one.”

Armed with that assurance, Safdie has steadily enhanced his collection over the years and says he’s always looking for the classics, like the brand’s Reference 2499 perpetual calendar chronograph, a watch that was produced from 1951 to 1985 and is, as Safdie describes, the “holy grail” of Patek wristwatches. He also keeps an eye out for exceptional examples of Patek’s Reference 3450 perpetual calendar, of which fewer than 250 examples were produced over a four-year period, as well as the brand’s Reference 1518 perpetual calendar chronograph, which was the first example of that style of complication made for the public market between 1948 and 1961.

“I’d rather buy an important Patek Philippe than anything else in the world,” Safdie says. “Gold. Stocks. Anything. It gives me constant appreciation.”

Most Patek Philippe collectors, he says, share a similar perspective. He references fellow collectors who own fine works of art and paintings worth tens of millions of dollars yet they tell him that they prefer their wristwatches because they can wear them and see them all the time. Safdie is no different. Whether it’s a 2499 or a 3450, he’ll wear all of the timepieces in his collection. “I’ve worn my best watches out for an evening,” he says. “You might wear it once a year, but you still wear it. That’s the beauty of watches.” He also explains that the acknowledgment that he receives from other Patek collectors when he wears certain pieces makes him feel a part of a very exclusive fraternity.

But for him to buy and wear any Patek Philippe, modern or vintage, it must first catch his eye aesthetically. “I have to like it first,” he says. “I have to enjoy wearing it. If I don’t like it, I’m not going to buy it, even if it’s rare.”

Impeccable craftsmanship and rarity are two aspects that tie into the intrinsic value of every  timepiece in Safdie’s collection, which is why he aims to collect only the best examples, like the classics mentioned above, or recently discontinued watches like a Reference 5004 split-seconds perpetual calendar chronograph, which the brand retired in 2011, and a Reference 5970 perpetual calendar chronograph—a watch that Safdie believes could become a legacy piece, since it was the last timepiece produced by the company during Philippe Stern’s tenure as the head of the company. “When you acquire something that’s rare, you have something special,” he says. “And when you have something special in all aspects—in the beauty of it, in the enjoyment of it, and in the investment of it—it’s not such a common thing.”

It’s uncommon for a customer to work personally with the Patek Philippe salon in Geneva and to buy from the company directly, but Safdie has enjoyed that privilege, due in large part to his passion for the brand and the extent of his purchases over the years (Safdie’s collection exceeds 50 timepieces, and that may be a conservative estimate).

Around the time that Safdie was rounding out his collection of rare, discontinued contemporary wristwatches, the salon’s head salesman, Carmelo Barresi, took him aside and introduced him to the world of collectible, vintage Patek timepieces. Barresi accompanied Safdie to the Patek Philippe Museum and highlighted the most significant vintage examples on display, which put Safdie on the right track to expand his collection with historic wristwatches. “After you finish a full, modern collection, you want to keep growing,” Safdie says. “You have to get into vintage, that’s the next level.”

He only wishes that he knew of the growing values for vintage pieces when he first began acquiring Patek Philippe wristwatches. He points to the Reference 3450 perpetual calendar, which was produced from 1981 to 1985. At the time that Safdie purchased the Golden Ellipse in the late 1970s, a fine example of that vintage model sold for around $30,000, but today, in pristine condition, it’s worth ten times as much. And that’s for a yellow gold model. An example made in white gold would command far more.

Partly as a result of Barresi’s guidance, Safdie chose to open his own gallery, Madison Fine Time, which is set on the corner of Madison Avenue and East 61st Street. Open by appointment only, the gallery provides Safdie with a venue to work as a dealer of vintage and discontinued Patek timepieces—a practice that he says he already was doing years ago, albeit in an unofficial way. “Any collector has to be a dealer, because he’s always selling and buying and upgrading,” he says.

The gallery isn’t an authorized dealership, so Safdie must be careful to not overstep his bounds. But by focusing on the category of timepieces that he collects himself, Safdie not only can share his personal collection with other Patek enthusiasts, he can work to find similar examples of those rare timepieces that his clients can buy. “This boutique is where I can share my knowledge on a personal basis to make sure people are happy with their acquisitions,” he says. “What greater dream could it be than to be surrounded by the things that you love and the things that you cherish? It’s like I’m a kid in a candy store; that’s how I feel every day.”