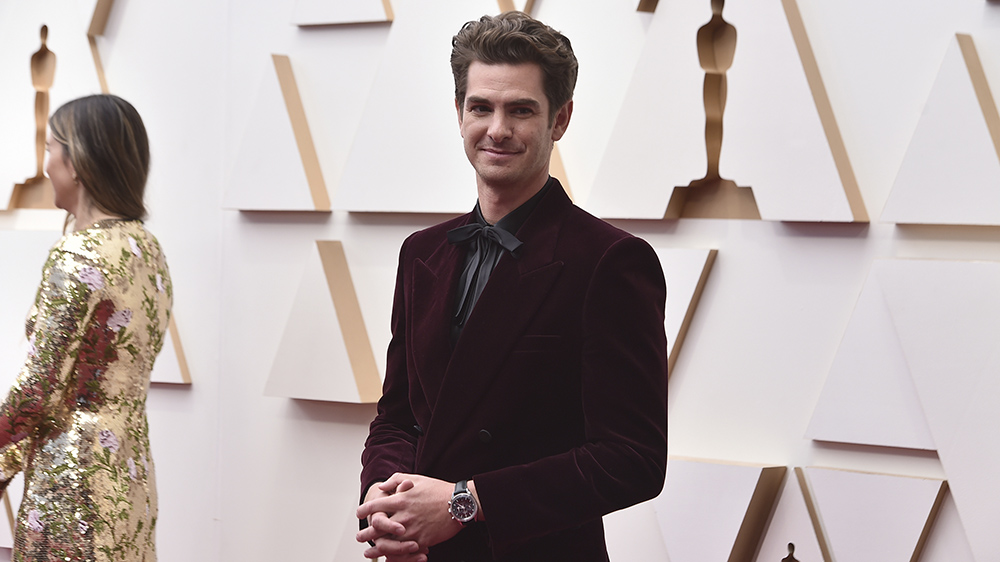 One of the perks of being a movie star as big as Andrew Garfield: getting a coveted Swiss watch before anyone else.

The Best Actor nominee wore a brand-new Speedmaster ’57 chronograph to Sunday’s 94th Annual Academy Awards. The timepiece matched perfectly with the burgundy velvet jacket of Garfield’s tuxedo, helping him complete one of the more elegant looks of Hollywood’s biggest night.

The Tick, Tick. . .Boom! star’s watch, which is the latest version inspired by the first Speedmaster from 1957, was unveiled by Omega earlier this month. It features a case that’s smaller (40.5 mm) and slimmer (12.99 mm) than on previous iterations, giving it a more authentic vintage size. Beneath its bezel and sapphire crystal, you’ll find a red dial that showcases rhodium-plated hour markers, “Broad Arrow” hands, two sub-dials and a date window at 6 o’clock. The Speedmaster, ref. 332.12.41.51.11.001, normally comes with a matching burgundy leather strap, but it appears to have been customized with a black strap to match Garfield’s shirt and pants. In this case, it’s a change that really works.

The watch is driven by Omega’s new manual-winding Co-Axial caliber 9906, which is one of the smallest chronograph movements on the market. It has two barrels for a 60-hour power reserve and a silicon balance spring for less friction, low maintenance and better performance. It will retail for $8,300. Amid a luxury-watch market rife with pieces that command five and six figures, that could be a relative bargain—assuming you can get your hands on one. Demand, we suspect, will not be low once the watch goes on sale.

Garfield isn’t the only star who has been won over by the refreshed Speedmaster ‘57. Belfast actor Jamie Dornan could also be seen wearing another version of the retro timepiece. His example features a rich green dial and a metal bracelet, giving it a character all its own.