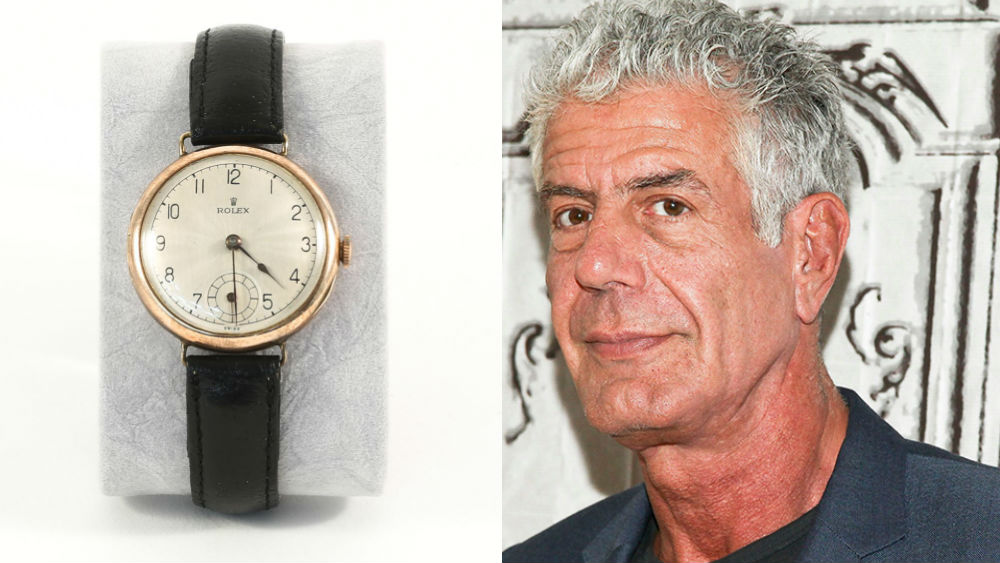 The love for Anthony Bourdain runs deep. Since his passing in 2018, the charismatic multi-hyphenate has continued to be remembered through his words, recipes, shows, philanthropy and, now, watches. A collection of Bourdain’s most cherished timepieces have just hit the auction block, with a generous portion of the sale being donated towards a scholarship at The Culinary Institute of America.

Presented by iGavel Auctions, the sale features eight coveted pieces of wrist candy—from a sentimental Rolex to a statement Patek Philippe—previously owned by the Parts Unknown star. The bids are already piling high and well eclipsing the estimates. At press time, the current bid on the chic jet-black Panerai Radiomir wristwatch is a lofty $12,000 while the blue-dialed Rolex Oyster is sitting at $10,000. Both watches had original top estimates of $2,000 and $4,000, respectively.

Other standouts include J Jacot Locle pocket watch (currently at $1,700), a Patek Philippe Calatrava ($9,250 and counting) and a vintage rose gold Rolex which may have belonged to Bourdain’s father (sitting at $3,700). Forty percent of the funds raised will be reserved for the scholarship while the other 60 percent will go to Bourdain’s family.

If you’re a fan of Bourdain but not a watch guy, you can still get in on the action. The timepieces are actually part of a bigger collection of Bourdain’s treasured possessions, which is being auctioned this month. The sale, titled Property from the Collection of Anthony Bourdain, features 215 lots of items that Bourdain acquired throughout his life, including artwork, records, books, furniture, as well as his famous chef’s knife.

According to iGavel, the auction was organized to reflect the beloved chef’s “multifarious interests: film, art, cooking, travel, writing and his endless observations of world culture.” Bids on Bourdain’s watches will be open until October 30.