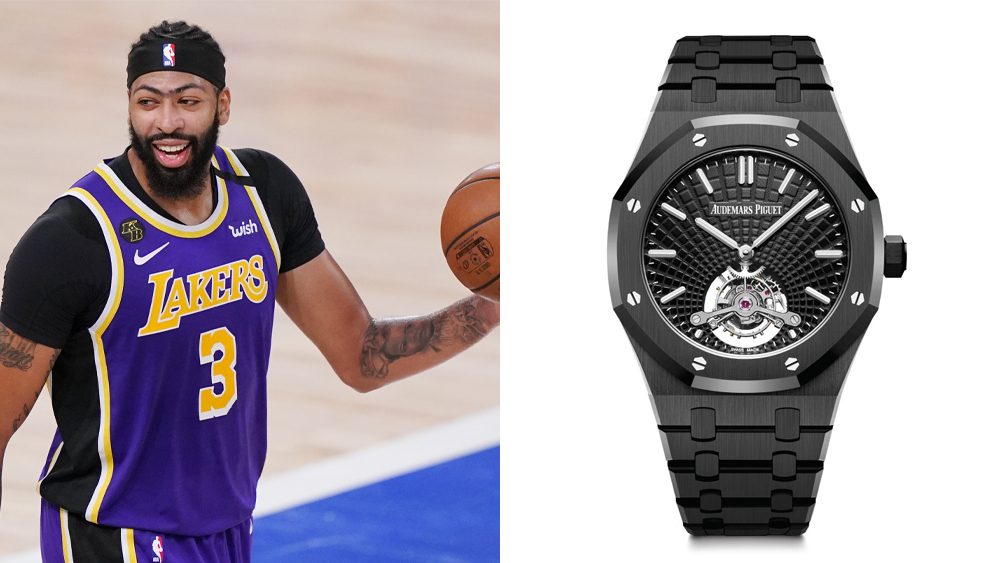 Lakers star Anthony Davis may not be an NBA champion yet, but it looks like he already knows how to dress the part. Just look at the black ceramic Audemars Piguet Royal Oak Extra-Thin he rocked before game one of the NBA Finals last week.

Despite the fact that NBA fashion has taken a decidedly casual turn in the bubble, the 6’10” power forward isn’t slacking when it comes to what he wears on his wrist. And his latest timepiece isn’t just a beauty; it’s also quite exclusive. As one of just 100 examples, it’s almost as rare as an All-Defensive Team big man who can both post up and shoot the ball from downtown.

Lead by example, Thank You AD!💛💜💛#anthonydavis#losangeles#lakersnation#covid_19#maskup#savehumanity#3#lakers

While the Royal Oak is a classic watch, Davis’s timepiece, ref no. 26522CE.OO.1225CE.01, has a distinctly modern feel to it. There are two major reasons for this: A tourbillon at 6 o’clock and a 41 mm black ceramic case and caseback. Not only does the “intense blackness” of the case look cool, the watchmaker claims it is also seven times harder than traditional stainless steel. Underneath its glare-proof sapphire crystal, you’ll find a black dial adorned with the brand’s “Tapisserie Evolutive” pattern, white gold hour markers and Royal Oak hands with a luminescent coating. Completing the package is a matching black ceramic bracelet that features a titanium folding clasp.

But the Royal Oak’s reputation is built on more than its elegant exterior. This particular variant is powered by the watchmaker’s Calibre 2924 Manufacture movement, which consists of 25 jewels and 216 moving parts. The hound-wound timepiece also features a 70-hour power reserve and water resistance up to 50 meters.

Of course, an Audemars Piguet of this caliber and rarity has a price tag to match. At current exchange rates, the black ceramic Royal Oak Extra-Thin goes for just over $170,000 (156,000 CHF). Davis should have no problem affording one, though. The forward, who is just two games away from winning his first NBA title, will be a free agent in line for one of the league’s biggest contracts after this Covid-19-elongated season comes to a close. Fortunately for Lakers fans, he’s expected to re-sign with the team.