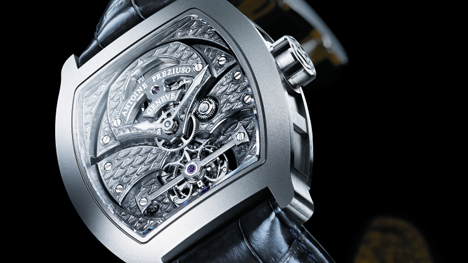 Venture into the lakefront boutique of Antoine Preziuso in downtown Geneva, and you will have stumbled upon one of the Swiss watch industry’s open secrets. Preziuso doesn’t have the celebrity of today’s watchmaking virtuosos like François-Paul Journe or Michel Parmigiani. His talent, however, is in the same league.

Preziuso, who has been making watches under his own name since 1986, is particularly known for his tourbillons, which combine classical finishing with a flair for the unusual. “My watches are created for customers who really want to be different,” he says. “I use a lot of art on my watches—the first purpose for many of my watches is not to give the time, but to show my art.”

Even though Preziuso has a penchant for unusual constructions and designs, his credentials in the craft’s time-honored methods are impeccable. A native of Geneva, Preziuso’s early career included time at bastions of traditional watchmaking, such as the Geneva School of Watchmaking and the complications department at Patek Philippe. After a period restoring watches and clocks under his own name, he was asked to create a special series of minute repeaters for Breguet, which captured the attention of watch connoisseurs in the late 1980s.

Preziuso is committed to innovation in his watchmaking, whether it is through the use of new materials (he was the first to use meteorite in a watch), new technologies, and new ideas, like the 3volution tourbillon, the first timepiece to use three separate tourbillon cages that rotate around each other. Even his simpler tourbillons are highly decorated, using en-graving, incredibly delicate pavé, or uncommon minerals.

Despite his prolific, often brilliant work, Preziuso and his watches are not widely known, largely because he has eschewed the marketing and international distribution that have become such an important part of the industry. Yet by building watches for a small but loyal following of private clients, he has managed to match the innovation of many much larger brands. “There is one word that separates my company from the others: authenticity,” he says. “I love to give life to these little mechanical machines. When I am at my desk and I move the balance wheel and the watch begins to move, it’s an outstanding moment for me.”