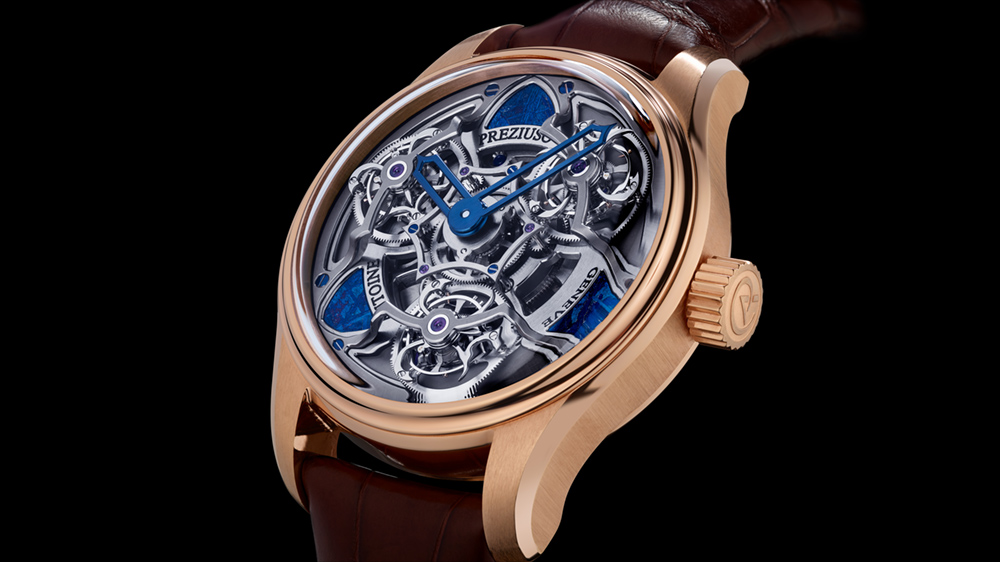 Antoine Preziuso is no stranger to haute horlogerie, and those who are deeply rooted in the collecting hobby will no doubt recognize the name. After a stint at Patek Philippe and other firms, Preziuso first unveiled a collection of watches under his own name at Baselworld in 1995. He was the mastermind behind the Harry Winston Opus 2, and in 2015, the first iteration of the Tourbillon of Tourbillons seen here took home the Innovation Watch Prize at the Grand Prix D’Horlogerie de Genève.

The masterpiece features a trio of tourbillons affixed to a rotating plate, which completes six rotations per hour; each tourbillon on the other hand rotates every 60 seconds. Vibrating at 3 Hz, the three closely positioned tourbillons resonate together in a manner that yields impressive regularity.

What differentiates the Chronometer Tourbillon of Tourbillons Meteor the most from its predecessors is its case design. Past versions of the model (and the majority of his other creations for that matter) feature more elaborate and ornate case designs—a bit of an acquired case for some. This new pink-gold case design (it’s also available in white gold) is still a significant 48 mm across, though it features a classic mix of brushed and polished finishes and a tall domed crystal not unlike the one belonging to the Christophe Claret Maestro we covered months ago.

Another change in the case design, the Chronometer Tourbillon of Tourbillons Meteor  features—as the name suggests—a trio of blue meteorite inserts filling the void in between each tourbillon. Preziuso has long been a fan of including meteorite in his timepieces, having used it as the case material for a pair of one-off creations in the past. This subtle touch of blue provides a perfect complement to the blued crews and hands used on the piece.

The Chronometer Tourbillon of Tourbillons Meteor will be produced by Preziuso on an on-demand basis, at a price of 420,000 CHF (approximately $431,800). At this time, only one example has been produced, with three pink-gold and three white-gold examples to follow. New York residents will have the opportunity to take a closer look at some of Preziuso’s creations this October when he presents at the annual WatchTime New York watch fair.