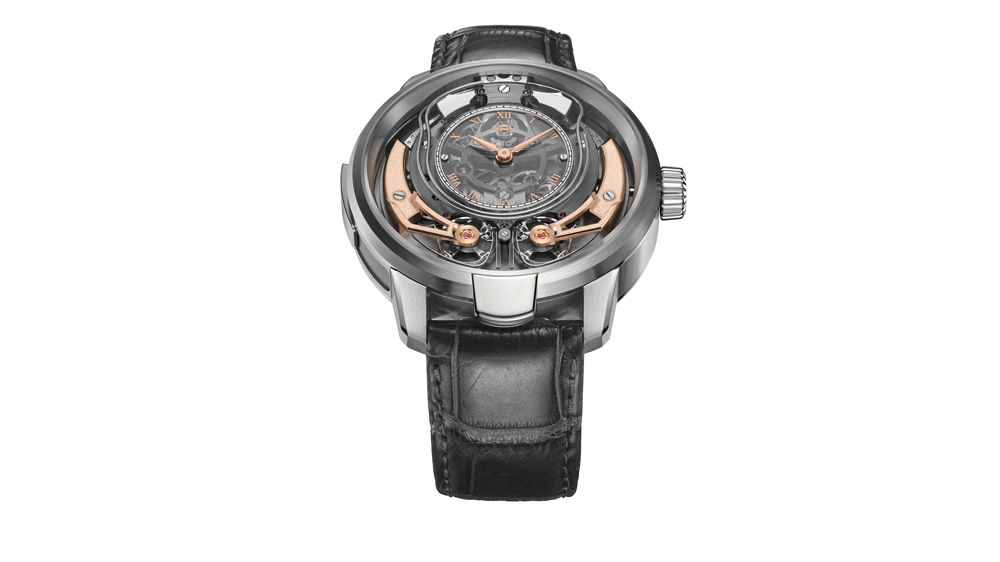 To celebrate a decade in the business as an independent watchmaker, Armin Strom is ringing in its anniversary with a bang…or a chime, if you will. Claude Greisler, Armin Strom’s chief watchmaker, has unveiled the world’s first resonance minute repeater. The company is already known for its resonance watches, which use two independent movements that ultimately connect to create a more accurate and precise timepiece. It’s not a new concept, in fact, its existed for three centuries but very few resonance wristwatches exist on the market (F.P. Journe’s Chronomètre à Résonance and Haldimann’s H2 Flying Resonance among the other two).

The concept was first discovered by scientist Christian Huygens in the 17th century, who uncovered the phenomenon of resonance in pendulum clocks which synchronized when hung on the same plane, and was later used by famed watchmakers like Abraham-Louis Breguet in pocket watches. A resonance Breguet pocket watch, originally bought for 5,000 Francs in 1814 in London, sold at Christie’s in 2012 for CHF 4,339,000 or $4,426,750.

Armin Strom has improved upon the invention by combining it with watchmaking’s most revered complication, the minute repeater. Housed within a titanium case, this watch is both light on the wrist and easy on the ears. Plus, as Greisler explains, “It’s an easy-to-use—even if you push the crown or you turn the hands clockwise or counter-clockwise, nothing can happen to the minute repeater—it’s fully secured system.”

But the real appeal of this watch is that you can watch it in action from the front of the case. Unlike most minute repeaters, this watch’s mechanism is visible on the dial side. That means you can see the two mirror-polished gongs (the golden boomerang-shaped parts on the dial) hit the gongs (the tubular metallic structure circling the dial) when the minute repeater is sprung into action.

To create the minute repeater, Greisler tapped Alain Schiesser, founder of Le Circle des Horlogers, a company that develops grand complications for brands like Jacob & Co. and others high-end watchmakers. Greisler and Schiesser had previously worked together for  Christophe Claret. Companies, usually clandestinely, turn to Le Circle des Horlogers to help create their minute repeaters due to the cost and complexity of creating one, but Greisler is quick to stress that, with the exception of hair springs and main springs, all of this timepiece’s 490 components are made in Armin Strom’s workshop in Bern, Switzerland.

The watch also takes inspiration from their hometown. The Zytglogge, a medieval clock tower built in the early 13th century, inspired the design of the timepiece’s dial and also, happened to have inspired Albert Einstein. At the beginning of the 20th century, the world’s most famous scientist was still just a patent lawyer in Bern (his apartment is not far from the clock), but legend has it he was so enamored with the astronomical Zytglogge clock that it inspired his famous theory of relativity. While in the early 1900’s the clock may have sparked a change in the way we think about time and space, today it has inspired a poetic and technical tribute to the art of making it.

As you can imagine, this out-of-this-world watch was no small feat for Armin Strom, as a result it’s priced at $350,000 and limited to 10 worldwide, three of which are already spoken for, so you may actually need to move at the speed of light to purchase one.