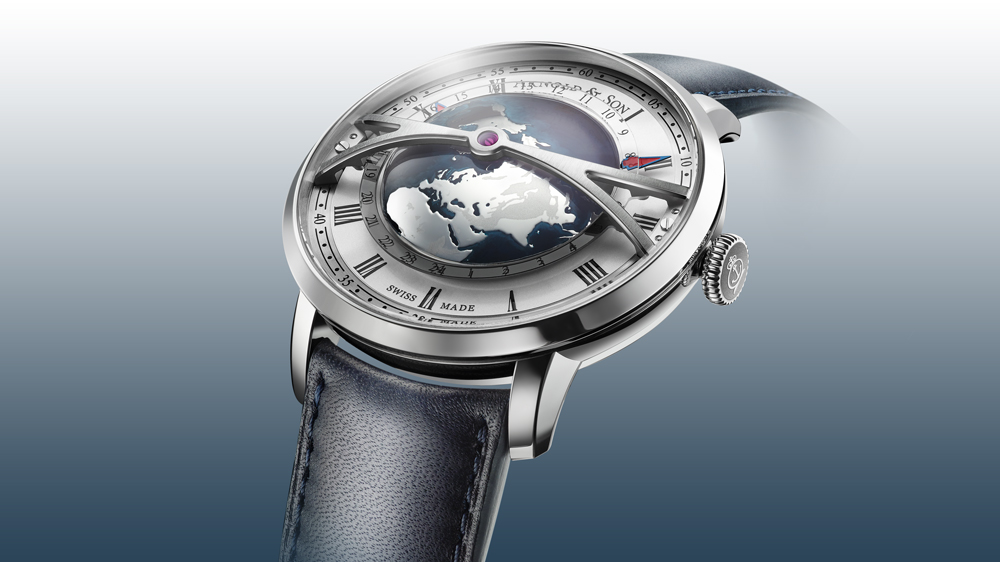 Depictions of the globe have become de rigueur among watches with a travel function, driven in part by practicality, and in part by a not-so-subtle appeal to the male ego. Among the major watch brands such models are usually also accompanied by “master-of-the-universe” pricing. Not so with the Globetrotter by Arnold & Son, which at $16,995 (arnoldandson.com), provides clear function and an impressive aesthetic. Rendered in stainless steel, it is made with the complex design and decorative technique of a far more expensive timepiece.

The company describes the function as a world time display, and while there is no formal definition of what constitutes the complication, the Globetrotter manages to give the wearer a sense of global time zones with a relatively simple construction.  Instead of a ring of cities that can be advanced with a pusher, the Globetrotter’s adjustments are all made through the crown. Local time, registered by the red lacquered hands on the periphery of the dial are set normally through the crown. Instead of a cities disk, the Globetrotter utilizes a 24-hour ring that is advanced in one-hour increments around the rotating globe.

The globe is far and away the central element of the piece.  Arnold & Son claims it is one of the largest such displays in watchmaking, and housed within a domed sapphire crystal with a thickness of 17.23 mm at its apex—the claim is utterly believable. The hemispheric globe is brass at its center, which has been subjected to chemical etching and sandblasting using a series of masks to obtain the continents and a degree of relief.  The oceans are lacquered by hand and a final lacquer coat is applied before polishing.

The process is less expensive and involved than the enamel seen on higher-priced watches, yet the effect is impressive nonetheless, especially as the globe imperceptibly rotates underneath a formidable arched bridge with a jewel bearing. Arnold & Son has a clear mastery of the language of watchmaking, enabling it to create value that can stir.