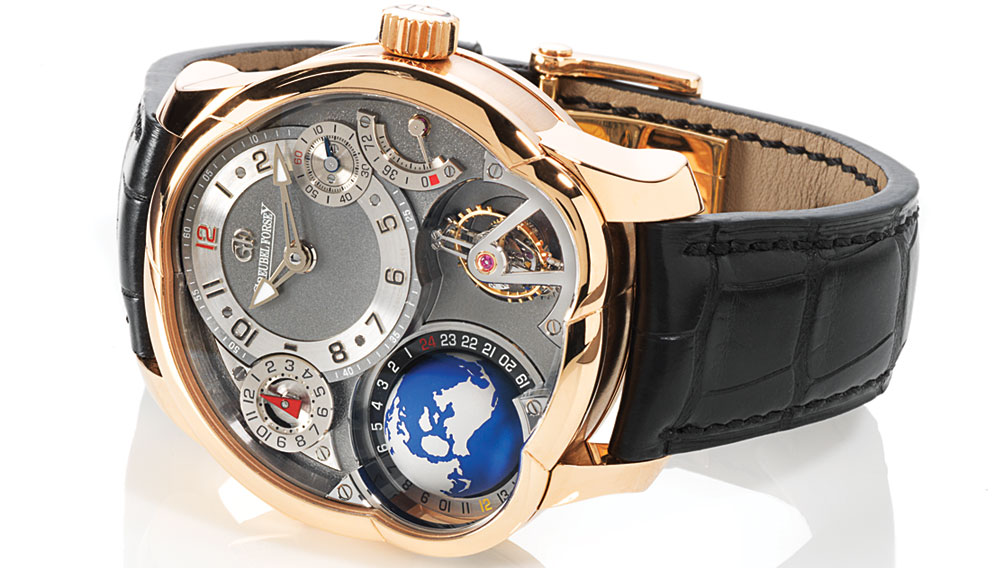 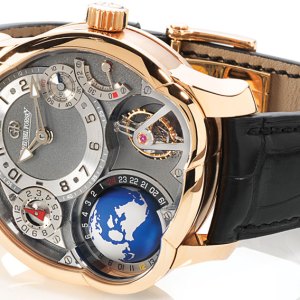 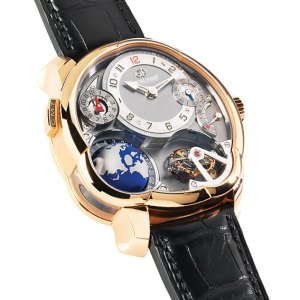 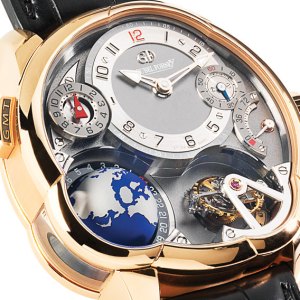 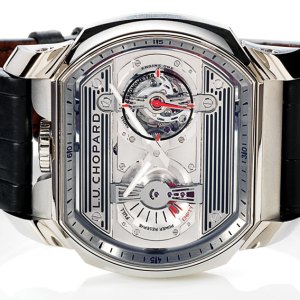 Greubel Forsey first attracted notice a decade ago by reviving 200-year-old English and French finishing techniques, and in the ensuing years, the company has pursued increasingly bold styles. In the GMT model ($595,000), a panoply of metal-finishing techniques enhances the many levels and curves of the movement, giving it the appearance of a cityscape. The rotating titanium-and-lacquer globe indicates world time—and how much Greubel Forsey’s watchmaking has advanced.

Chopard, a brand with close ties to motorsports, designed the L.U.C Engine One H ($87,190) to resemble an automobile engine and configured the dial horizontally so that it recalls the dashboard of a racecar. The tourbillon and barrel (also known as the power-reserve indicator) are set side by side in what look like engine cylinders. The grille design on the dial and back of the watch evoke the striping on engine-valve covers, and the power-reserve indicator was designed to look like a fuel gauge. Wearers will be tempted to depress their right foot every time they check the time.

The RM 039-01 Automatic Flyback Chronograph Aviation E6-B ($140,000) is different from most of Richard Mille’s designs in that its most interesting element is on the exterior. The watch is equipped with a bidirectional rotating bezel that performs almost every function of an aviator’s E6-B slide rule. When flying a plane, pilots can use the device to determine wind corrections, fuel-burn rate, flight speed, and other calculations. One of the pushers on the watch’s exterior starts and stops the chronograph; a second resets the chronograph; and a third adjusts the second-time-zone hand. The case is water resistant, and the crown can be set to lock the pushers in place.

The buzz about Franck Muller’s Giga Tourbillon ($264,400) concerns the size of the tourbillon cage, which is said to be the largest of any timepiece. However, the movement’s openwork design draws attention to the four enormous winding barrels that feed energy to the tourbillon. Without the covers that customarily conceal the barrels, the coiled springs are able to provide visual drama along with tension. The power is almost palpable.

Dior takes inspiration for the Grand Bal watches from its couture gowns, but the colors of the one-of-a-kind Dior VIII Grand Bal Piece Unique No. 9 ($170,000) may be too vibrant to suit a formal affair. Amethysts of various cuts decorate the bezel, the dial, and the moving winding rotor, which has been specially fixed on the dial side. The stones contrast brilliantly with the watch’s black ceramic band.

Blancpain’s Tourbillon Carrousel ($319,000) is, strictly speaking, a traditional watch, but it demonstrates that traditional techniques can produce quite a spectacle. The tourbillon and carrousel—two rotating complications that negate the effect of gravity on the balance spring—are linked by a differential gear train, which uses the average input from both components to enhance the watch’s accuracy. The two components, designed by Blancpain’s occasional collaborator Vincent Calabrese nearly 20 years apart, are visible through their own apertures. The many levels of supporting gears in the movement indicate just how complex this watch is.

Corum conceived the Ti-Bridge watches to build on the in-line movement design of its 30-year-old Golden Bridge concept, but the Ti-Bridge Tourbillon ($65,800) departs from that scheme. The two transversely set winding barrels, supported by massive cross bridges, occupy what was once negative space. Like the hands, the bridges feature cutaways, which add a sense of power to a formerly delicate design.