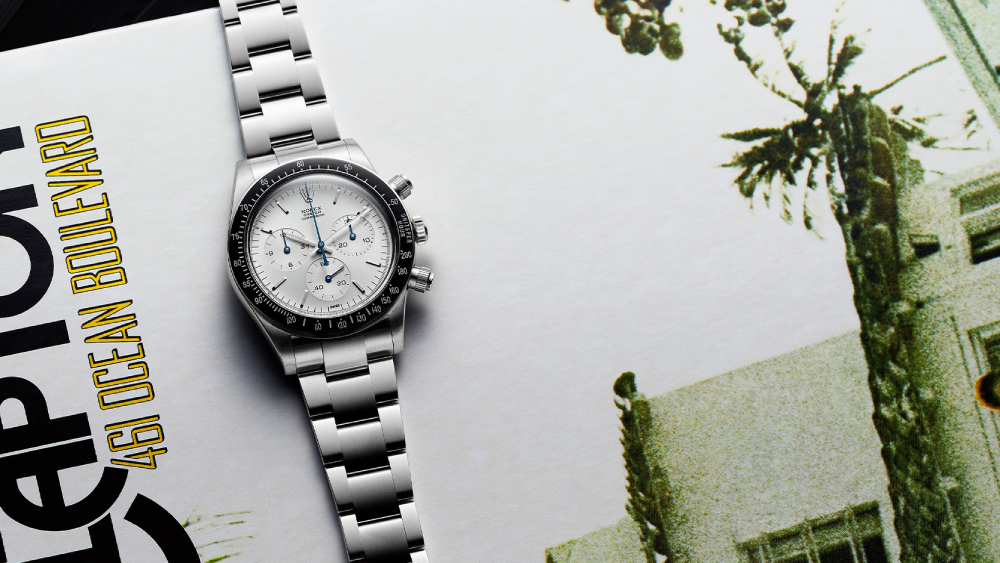 You could argue that most of Rolex’s designs are legendary in their own way. But, among collectors, some designs are just more coveted than the others. The Swiss watchmaker’s Albino Daytona from the 1970s is one such timepiece, and now one of the world’s finest customization shops is honoring the watch with its own homage.

Artisans de Geneve’s newest customization, commissioned by a collector, pays tribute to the ultra-rare Rolex Daytona 6263 Oyster Albino––a model sometimes referred to simply as the Albino––which was first produced by the watchmaker in 1971. It’s said that only 3 or 4 of that model were ever created, one of which was sold by musician Eric Clapton in 2003 for a then-record $505,000. The very same one was later sold again in 2015 for $1.4 million.

Because originals are indeed so rare, the new homage uses a more contemporary Daytona 116520 as its base, which was then modified to mirror the characteristics of those vintage timepieces. The most important feature of the piece, the monochrome silver dial that inspired the Albino’s nickname, is faithfully reproduced.

A closer look at the faithful homage.  Courtesy of Artisans de Geneve

The new iteration also showcases some custom touches like its barrel, a machined case with removed crown guards, a mirror-polished bridge and Millerighe MK00 pushers. Artisans de Geneve shows off its technical mastery in the finely tuned triplet subdials, which all have metallic blue hands. All of its inner workings––which allow for a 72-hour power reserve––are viewable thanks to a transparent sapphire display back. On top of all this, the piece manages to be waterproof up to 100 meters.

Artisans de Geneve usually requires a full six to eight weeks to implement any desired changes to a given watch, every aspect meticulously planned so as to achieve the desired result. That kind of skilled coordination means this version of the Albino comes in at $17, 125 for the cost of labor alone––if the commission is accepted. That’s no small sum, but some would argue that it’s a bargain for an homage so painstakingly handcrafted. We couldn’t argue.