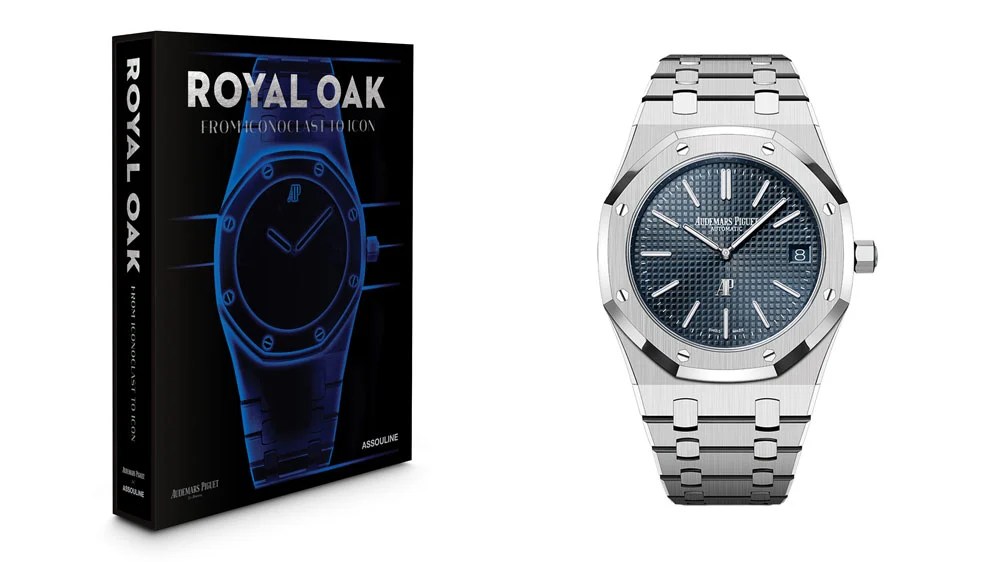 A new and definitive tome on Audemars Piguet’s Royal Oak is out this month to coincide with the watch’s 50th anniversary. Royal Oak: From Iconoclast to Icon, written by journalist and acting editor-in-chief of Wallpaper magazine, Bill Prince, and published by Assouline, is the first book on the famous AP model in a decade (the last, mostly a pictorial, was written by Martin K. Wehrli and Heinz Heimann in 2012). And it will be a must for Royal Oak aficionados, watch enthusiasts and overall culture hounds alike.

While the book presents a detailed history, including everything from Gérald Genta’s early designs of the timepiece and interesting information about how its famous tapisserie dial was created, Prince also provides rich context for the historical milestones in art, fashion, architecture and technical innovation that were happening simultaneously in the year the Royal Oak was created. “What really attracted me to writing a book and telling the story of the Royal Oak was the frame of its history, ‘72 to the present day,” says Prince. “I’m not quite old enough to have been in the market for a Royal Oak in 1972, but I certainly grew up with all of the influences of the late ‘60s and early ‘70s. So for me, the cultural framework was really important. Telling the story of how the Royal Oak has maintained its centrality in that sort of cultural firmament for 50 years was great fun.”

When asked what surprised him most during his research he eschews any mention of granular details about a movement or nuances about the watch’s design origins and instead points to other groundbreaking designs of the era. “I discovered so much about 1972 itself,” says Prince. “Technics’ direct-drive turntable was first released that year without which you could not have scratching because you needed the solid gears underneath the turntable rather than rubber bands. There were so many serendipitous facts I discovered around the timing of the watch’s launch but also generally the world that the watch came into.” He also points out that it was the same year Yves Saint Laurent put the safari jacket on the map; coincidentally, the Royal Oak’s codename during its inception was “Safari.” Audemars Piguet, of course, was likely not taking cues from the catwalk, but there was clearly a cultural confluence of ideas happening at the time.

The book does, however, provide plenty of juicy details watch nerds will devour. Prince dived deep into Genta’s archives thanks to the late designer’s wife, Evelyne Genta, who, in addition to serving as the ambassador for the U.K. in Monaco, is the gatekeeper of over 3,400 of her husband’s drawings in her Georgian townhouse in London. They helped paint a picture not just of Genta’s magnificent design but of his overall approach to form and function. “There’s a very strict architectural line that he always took, at the same time as this artistic, almost avant-garde approach, and there’s also his great technical mastery,” says Prince. “He trained as a jeweler, so he understood so much about classical and ancient architecture but also the disciplines of contemporary jewelry making—which I think everyone can see is clearly expressed in the bracelet.”

For movement obsessives, there’s coverage of the inception of the Royal Oak’s 2120 and 2121 calibers as well as original sketches of the bracelet showing the blueprint for its studs with connecting links that taper in size. Prince, who spent decades covering the watch market as deputy editor at British GQ, already had years of knowledge of the Royal Oak under his belt but, he says, Audemars Piguet’s head of complications, Michael Friedman, and director of heritage, Sébastian Vivas, provided a wealth of information. He cites the AP Chronicles on the brand’s website as an excellent resource for those who really want to get encyclopedic on the model’s history. “If the book leads [readers] to discovering the rich detail that’s on the AP website around Chronicles, then its job is done, because it’s absolutely fascinating,” says Prince. “I could barely scratch the surface of the knowledge and the information that’s contained within those documents.”

Genta’s Archives Contain Never-Before-Seen Designs
“These are, in effect, single drawings—they’re not a series of individual blueprints. However, they are individual drawings from which, I’ve been told, designers could easily take measurements and create watches should they wish to. And the level of detailing is extraordinary on them. Each one is an artwork in its own right.” Prince, however, says he doesn’t know what Ms. Genta has in store for them.

The Royal Oak Wasn’t Necessarily a Flop at Debut As the Myth Goes
“There’s a legacy around the original 5402 that it was unsuccessful at launch. It took time to find its market but it also took time to reach its market because this was the first series-produced watch that really ran to a significant scale for Audemars Piguet. They had been making very low volumes of watches and suddenly they had an extant case and bracelet that were sold under the name Royal Oak. And it was a question of really ramping up production for that.”

On Whether or Not the Royal Oak Is Immortal
[In the book, Prince cites a quote from Georges-Henri Meylan, a former executive and CEO of Audemars Piguet from the late ’80s through the early 2000s, in which he calls the Royal Oak “immortal.”]

“I got the sense he was using the term meaning it’s indestructible, rather than it has perpetual life. But it comes back to this incredible sustaining power the Royal Oak has. How do you account for it? You can account for it in in various ways when you talk about the design, and the book talks a lot about how it just empirically, and preternaturally, fits into each year. It’s uncanny, it’s disruptive, it’s revolutionary.”