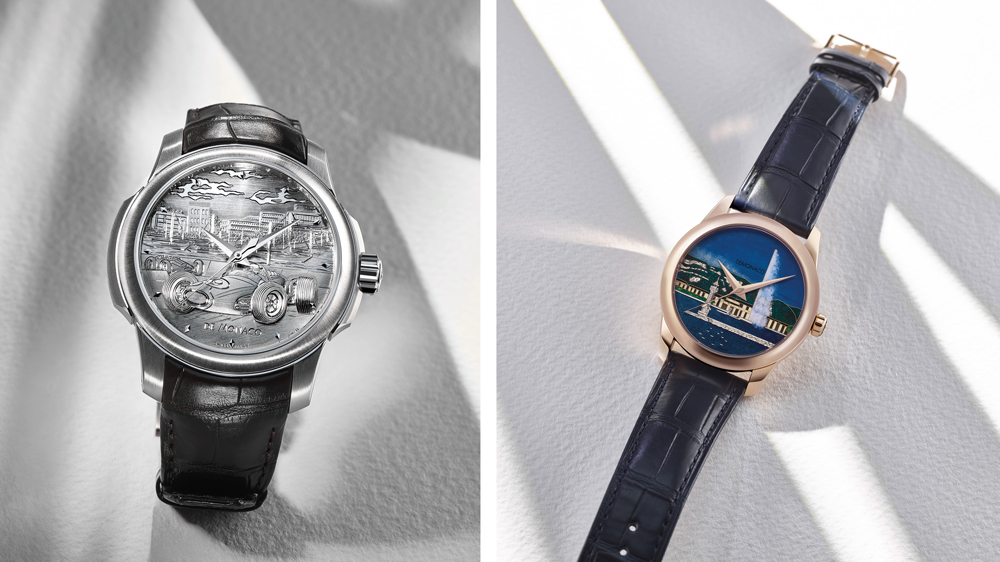 Ateliers’ DeMonaco produces limited-editions and unique bespoke pieces with purpose-built movements at an output of just 150 timepieces per year. Co-founder and CEO Pim Koeslag is an overachiever who graduated at the top of his watchmaking class at the Zadkine school in Amsterdam in 2003. After being scouted to work for some of the industry’s top brands, Koeslag ultimately co-founded Ateliers DeMonaco, dedicating himself solely to the creation of exceptional timepieces. His two newest rarities include The Grand Prix de Monaco and the Jet d’eau de Genève—two timepieces that require a near maniacal amount of artisanal hand work.

The Grand Prix de Monaco 1968 ($94,000) has a dial – celebrating the city’s famous race and prolific winners Graham Hill – that is relief-engraved by hand on three layers of 18-karat white gold depicting the race, the Monaco harbor and surrounding buildings, and the sky with clouds. The key to its uniqueness is that the engraving goes three plates deep, giving the composition a 3D sculptural quality that took an artisan 200 hours to engrave by hand. It is one-of-a-kind. The dMc 700 automatic in-house movement features a 22-karat gold rotor engraved to represent the crown of the Principality of Monaco and hand-decorated bridges and balance cock.

The second new piece is the Jet d’eau de Genève ($63,200), the key landmark of the city of Geneva, which features a dial that takes 50 hours to complete. Two variations depict the fountain in Lake Geneva using three different styles of enameling: cloisonné, champlevé, and grand feu. The fountain on each dial is allowed to bleed slightly into the rest of the composition in order to produce the effect of cascading water. Aside from its painstaking decorative work, the timepiece also features a patented “freebeat” regulation system that allows the watchmaker to regulate the movement by adjusting the frequency rather than with pins. It is limited to 18 pieces each in 18-karat red or white gold and contains the manual wound caliber dMc-708.