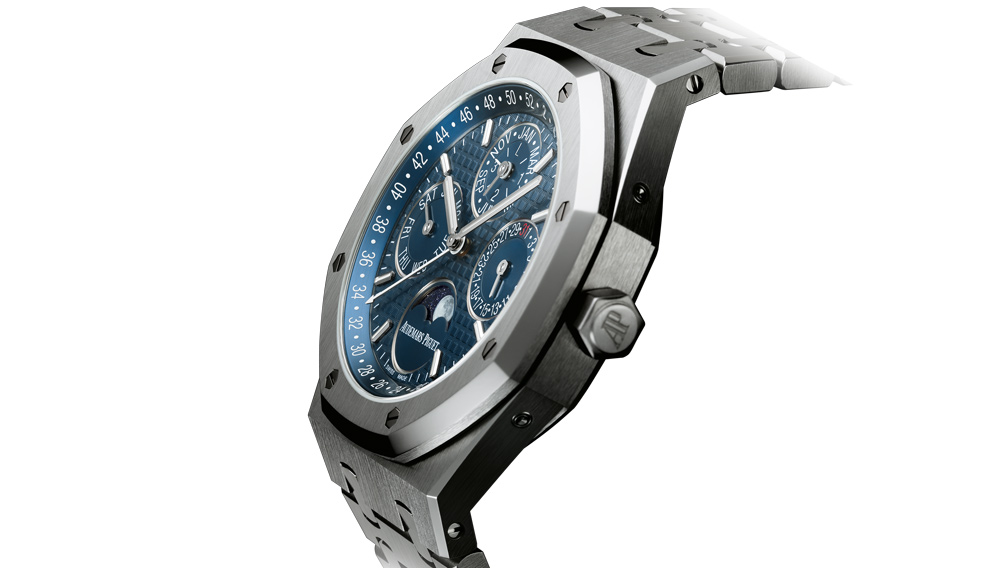 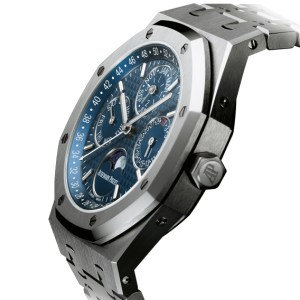 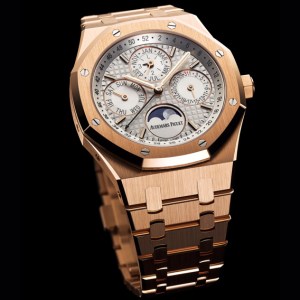 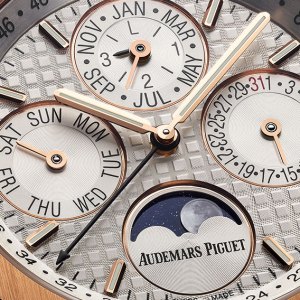 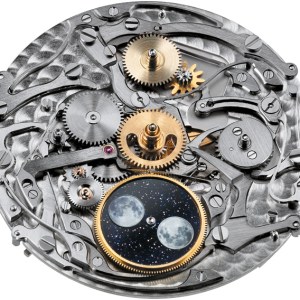 “The idea is to rework the traditional perpetual calendar in a more contemporary way,” declares Audemars Piguet’s global brand ambassador Claudio Cavaliere about the company’s new Royal Oak Perpetual Calendar. Looking at the new automatic caliber 5134 mechanism inside the Royal Oak—the fifth version applied to the venerable and venerated 2120 automatic movement—it becomes clear that this is an incremental update to the traditional lever-based perpetual calendar mechanism. The circular month, date, and days of the week indicators have been enlarged. The moon phase has been upgraded to modern accuracy standards (a day’s error once every 125 years and 317 days) and a centrally mounted weeks of the year hand has been added. Although none of these changes are in themselves revolutionary, the new mechanism illustrates the niche that conventional perpetual calendars occupy in the watchmaking culture of a traditional brand like Audemars Piguet.

“We want to keep our philosophy of hand adjustment,” explains Cavaliere, who formerly held the title of head of products at the company. “When you are working with an ultra-thin movement, especially one like the 2120 that is not exactly young, the most important thing is to achieve the right balance of forces in the movement during the date change.” Within Audemars Piguet’s collector community and among other aficionados, caliber 2120 enjoys iconic status for its sleek design and efficiency. Developed in the late 1960s, it is just under 2.5 mm thick in its simplest configuration: elegantly thin but robust enough for a sports watch.

The traditional perpetual calendar mechanism, on the other hand, is a much older proposition. The slow-moving interplay of a large lever with various cams, stars, and wheels that represent the important divisions of our Gregorian calendar dates from the 18th century and was brought to wristwatches in the early 20th century. Today it remains the most widely used mechanism for providing continuous tracking of the date through different months and leap years, but can be time-consuming to set and adjust when the watch winds down.

Yet to watchmakers, particularly in Audemars Piguet’s home in the Vallée de Joux, the ability to successfully construct and adjust the old mechanism means something more: a high-level skill set that is increasingly rare. Depending on the date, the change process in such movements can take a few hours, from 10 pm until 1 am, during which time the friction from a poorly built movement can sap the amplitude of the balance and therefore the accuracy of the watch. Master watchmakers prevent this by carefully adjusting the tension of the numerous hairlike springs inside the mechanism. The association of the perpetual calendar with the idea of becoming a master watchmaker is further reinforced at Audemars Piguet by the story of its first perpetual calendar for a 2120-driven timepiece, which apparently grew as a secret project of one of the company’s top watchmakers in the late 1970s.

“One of the main things we did with the new mechanism was to rework many of the very fine springs so they can be adjusted to use less power,” says Cavaliere, who describes another wrinkle particular to the 2120. “Because these movements are so thin, the amount of torque in the mainspring barrels can often vary slightly from movement to movement. Each perpetual must be adjusted to that.”

Cavaliere is quick to point out that the tradition inherent in the Royal Oak Perpetual Calendar does not rule out new approaches of the past—as seen in the novel single-level perpetual calendar mechanism in 2006’s Tradition d’Excellence Cabinet No. 5—or of the future. “The traditional perpetual calendar is tied in many ways to this region,” he says. “But that does not mean we don’t look for other solutions.”