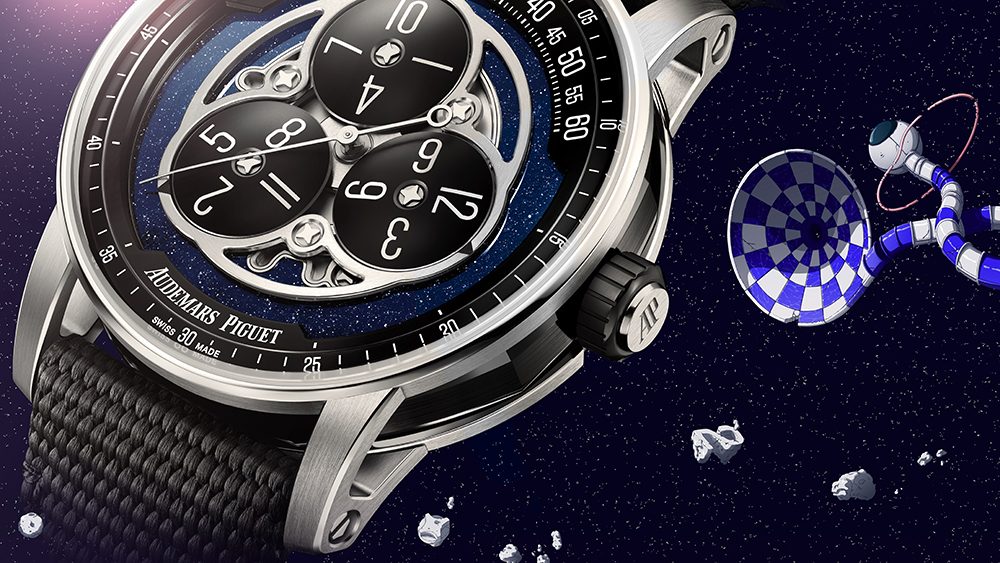 Imagine, if you will, that it’s the mid-17th century… and you’re the Pope. In other words: you’re a baller, and you can do whatever the heck you please.

Such was the case roughly 400 years ago when Pope Alexander VII was suffering from insomnia—insomnia, he posited, that was made worse due to the ticking of a clock. Putting in a special request to the Campani brothers—clockmakers based in Rome—he ordered a “night clock” that wouldn’t disturb his precious slumber. The brothers delivered a special timepiece on which the time was read not conventionally via a dial with hours around the periphery, but along a semi-circular axis with an aperture that indicated the quarter-hours. This clock, which was lit from within, was a precursor to the “wandering hours” complication that is just now finding its way back into the watch-buying public’s consciousness.

Said complication made its way, by the end of the 17th century, into pocket watches; by then, these smaller timepieces included fully graduated minute scales, allowing for more accurate timekeeping. Sophisticated and requiring great skill to manufacture, they were sometimes offered as gifts to important persons, dignitaries, and visitors. In the 19th century, the design of these timepieces changed slightly, with a 180-degree aperture giving way to one measuring 120 degrees, and the quarter-hour measurement and hour window disappearing. Eventually, a 360-degree wandering hours complication appeared, though these were eventually eclipsed in popularity by the “jump hour” complication that came to the fore during the Art Deco period in the 1920s.

Flipping through a copy of the Journal Suisse d’Horlogerie in 1989, an Audemars Piguet watchmaker discovered the wandering hours complication for himself—and just in time, too: The dawning of the 1990s coincided with a resurgence in mechanical watchmaking following on the heels of the dreaded Quartz Crisis, in which hundreds of watchmakers and entire firms were put out of business. Piquing the interest of AP’s management, the maison began development of a new watch that included the wandering hours complication, which it released in 1991 after 18 months of development. This watch, the reference 25720, was named the Star Wheel, a reference to the three “stars” supporting the hour discs that revolve around the dial.

Roughly 30 “Star Wheel” timepieces were produced by the maison between 1991 and 2003. Housed within various collections, they ran the gamut aesthetically between the classical and the avant garde, but each featured an arc-shaped time aperture and wandering hours system. Beloved by collectors, the Star Wheel disappeared from the AP catalog nearly 20 years ago.

What better way to introduce this beloved complication—and AP’s unique take on it—than within the (still relatively new) Code 11.59 collection? Though the Royal Oak remains the shining, iconic emblem of AP in the consciousness of many a watch enthusiast, it’s the Code 11.59 that has done the most to move the storied brand forward, to help it shed some of the weight of Genta’s famed creation and shift the focus into the future. Love it or hate it, Code 11.59 was a risk worth taking when many brands were — and are still — casting their collective mind’s eye firmly on the past, reissuing vintage models seemingly ad infinitum in an effort to capitalize on what was already once successful, and what is easy.

The new Star Wheel — reference 15212NB.OO.A002KB.01, for those keeping track — not only gives the 17th-century complication a fresh lease on life, but does so in a contemporary, thoroughly cool way, pairing it with a gorgeous aventurine dial housed in a white gold Code 11.59 case. Measuring 41mm in diameter, the watch’s sophisticated architecture includes a black ceramic mid-case and crown, plus hand-finished polished and satin-finished edges and bevels that put the savoir faire of the manufacture on full view. A double-curved sapphire crystal provides subtle magnification of the dial below, while an exhibition caseback provides a view of the movement — complete with a 22-carat pink gold oscillating weight—beating within. But more on that in a moment.

The dial is, of course, the true star of the show, here: Framed by a fully graduated, black outer second track, a larger 60-minute track is displayed in a 120-degree arc between 10 and 2 o’clock. Behind this is an incredible, blue aventurine dial atop which sit three black hour discs, each of which is overlaid with four white numbers in highly legible white printing. Made of aluminum subjected to PVD treatment, each is given a sandblasted opaline finish. As they rotate around the appropriate hour moves to the four and indicates the passing minutes on the 120-degree minute track—a sophisticated, playful system whose origins extend back 400 years.

The black and white touches—contrasted with the sparkling blue of the aventurine dial—are thoughtfully accented by the ceramic crown and mid-case, as well as a textured black rubber-coated strap with a pin buckle engraved with the Audemars Piguet logo. Powering the Star wheel is the automatic Calibre 4310. Derived from the Calibre 4309, it adds a wandering hours module to a highly accurate time-only movement and includes an impressive set of specs, including 70 hours of power reserve, 32 jewels, a frequency of 4 Hz, and 261 parts.

At $57,900, the Star Wheel is priced roughly in concert with the Code 11.59 Self-Winding Chronograph in various precious metals, and well under the various tourbillon, perpetual calendar, and minute repeater models. Like those other complications, it doesn’t seek to reinvent the (Star) wheel—rather it takes a charming, whimsical mode of timekeeping and pairs it to a housing whose design is completely of the moment. A breath of fresh air in a never-ending flurry of vintage reissues, it’s a welcome addition to what is quickly becoming one of the most contemporary-feeling collections in modern watchmaking.