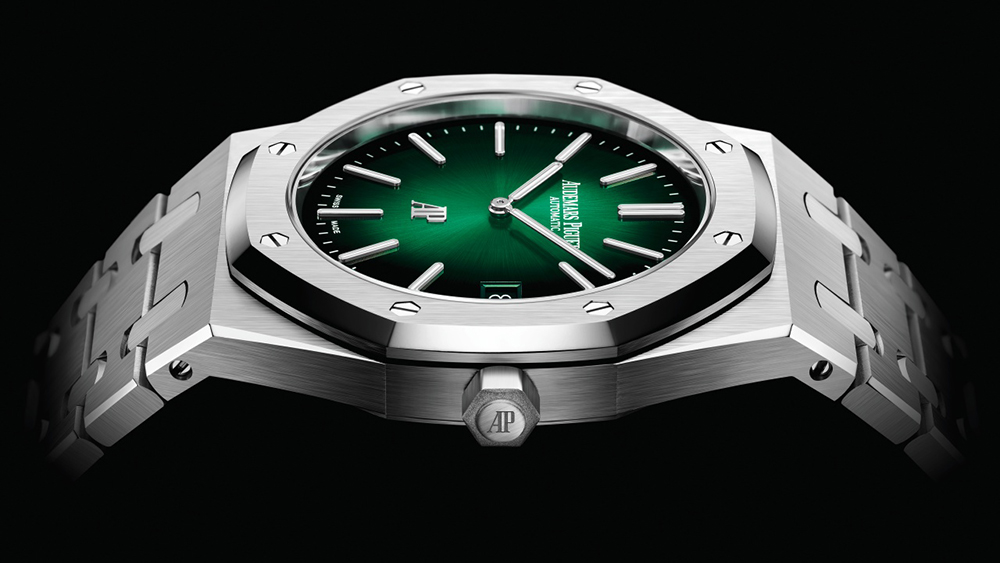 Audemars Piguet is known for its groundbreaking watches. And last night, it added another award-winning design to its credit.

On Thursday, the Swiss watchmaker’s Royal Oak “Jumbo” Extra-Thin watch won the Iconic timepiece award at the 21st Grand Prix d’Horlogerie de Genève, widely regarded as the watch world’s Oscars. The annual competition spans 14 categories, from divers to complicated calendar watches. Audemars Piguet’s watch was one of six nominees in its category, which included competitors from Vacheron Constantin and Tudor among others. Ultimately, the slender reference was recognized for its timeless design.

The watch features a 39 mm case and bracelet made from 950 platinum, topped with a glare-proofed sapphire crystal. Its green sunburst dial is accented with white gold applied hour markers, a date window and signature Royal Oak hands with luminescent coating. The timepiece also features a transparent sapphire caseback that gives collectors a view of its 22-carat gold oscillating weight. This detail is a part of the manufacturer’s self-winding Calibre 2121, which was introduced when the Royal Oak debuted in 1972.

Owners will find the 247-part movement visible behind the oscillating weight. The ultra-thin movement, at just 3.05 mm, allows for the watch’s slim profile. Still, at 19,800 vibrations per hour, it has a minimum guaranteed power reserve of 40 hours. It’s also water-resistant to 50 meters.

Audemars Piguet unveiled its first Royal Oak with colorful stone dials in the 1970s. The most notable models released included brown, green and blue tones. Those models paved the way for a new generation of expressive dials from the brand in the 1990s.

So, what’s next for the brand? “While the watchmaking industry had to reinvent itself during the pandemic, many people educated themselves about haute horlogerie,” said Audemars Piguet CEO Francois-Henry Bennahmias in a statement. “Today, we see a rise of very young clients fascinated by Swiss fine watchmaking around the world so let’s make them dream with our craft. The best is yet to come.”