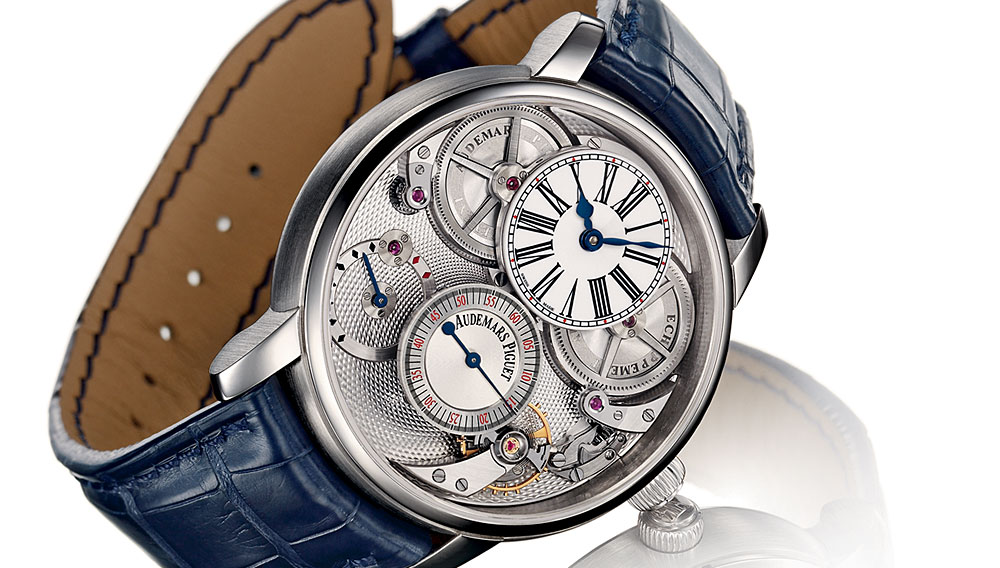 Wheh the possible exception of a power-reserve indicator, the Jules Audemars Chronometer has no complications whatsoever,” says Giulio Papi, the watch’s technical designer. His assertion, though accurate, is also a gross understatement. Audemars Piguet’s Jules Audemars Chronometer with Audemars Piguet Escapement is indeed a straightforward watch; but its combination of complex, evocative design and stunning timekeeping capabilities make it the most impressive timepiece created in the last year. Although the Chronometer is the third watch the company has issued with the new escapement that debuted in 2006, it comes far closer to fulfilling the promise of the original design than did previous versions.

Audemars Piguet’s escapement—the small assembly that releases energy in accordance with the beat of the oscillating balance wheel—employs a substantially different layout than the traditional anchor design used in practically every mechanical watch. The new configuration is more energy-efficient and requires no lubricant, two advantages that opened up a number of options for the company’s engineers. “The first idea was to use the extra energy to drive a larger, higher inertia balance wheel,” explains Papi. “That’s what we did in the [2006] Cabinet No. 5 with some success. The second idea was to increase the frequency of the watch, which was never possible in the past because the lubricant would fly off the parts.”

The Jules Audemars Chronometer runs at 43,200 beats per hour (6 Hz), a far higher rate than any production watch. The effect is dramatic. After initial assembly, the first Chronometers recorded a loss of just two seconds per day—many times better than a COSC-certified chronometer. For an additional fee, customers can request further regulation of the watch: A special hand-adjustment process that can take up to two months brings performance to an even higher standard of accuracy.

While the open-movement architecture seems to share much with the Cabinet No. 5 and its successor, the Millenary with Deadbeat Seconds, the inspiration is quite different. Octavio Garcia, who, along with Papi, led Audemars Piguet’s design team on all three projects, intended the piece to recall the aesthetics of old-fashioned marine chronometers. Design cues, such as traditional shapes and numerals on the enamel dial, are combined with new colorings and treatments. Overall, the technical quality of the finishing as exhibited on the inside beveled corners, the guilloche on the main plate, and the various areas of mirrorlike black polishing is intended to highlight the company’s watchmaking abilities; it does so most effectively.