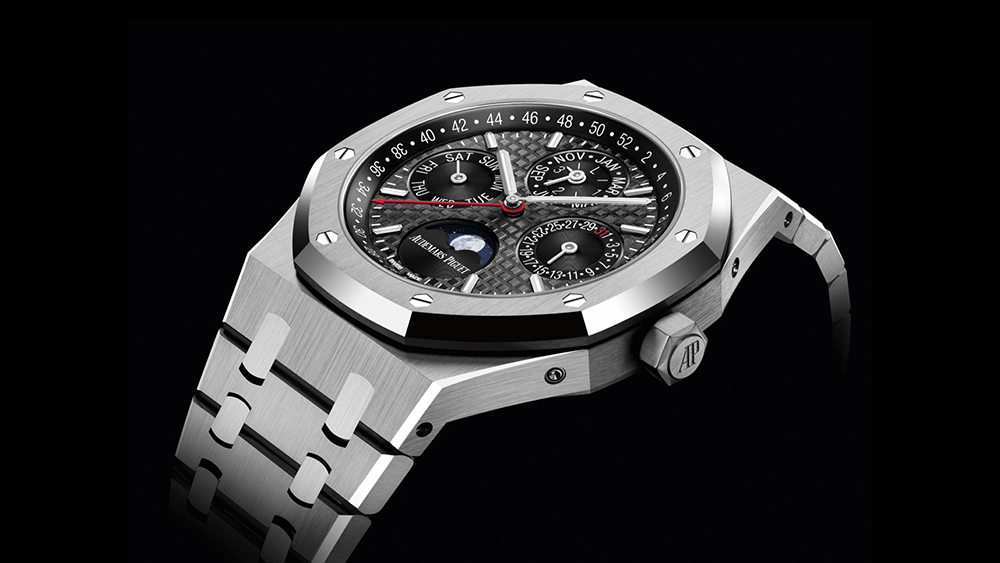 Audemars Piguet’s Royal Oak Perpetual Calendar is kind of like the chameleon of the watch world. Since it debuted in 1955, it has sported many different skins—stainless steel, yellow gold and even jet-black ceramic. Now, the Swiss watchmaker is adding another to the list.

For the first time ever, Audemars Piguet has released a Royal Oak Perpetual Calendar finished in full titanium. The limited-edition timepiece was designed in partnership with Insta-famous watch collector Austen Chu as a tribute to the brand’s “enduring history with China.”

The timepiece, which the watchmaker bills as a “combination of sporty and refined aesthetics,” features an ultra-light titanium case and bracelet and weighs in at a minuscule 104 grams. The face sees a slate grey dial in a “Grande Tapisserie” pattern alongside black subdials and inner bezels, which is juxtaposed by white hour markers and red accents. According to the watchmaker, the red is a nod toward “Chinese cultural tradition” in which the color symbolizes luck, joy, and happiness. The watch, which is created exclusively for the Chinese market, is also limited to just 88 numbered pieces (8 is considered a lucky number in Chinese culture).

Under the dial, the latest iteration has been equipped with a caliber 5134 movement which beats at a frequency of 2.75Hz and boasts 38 jewels and a 40-hour power reserve.

The timepiece comes with two additional straps; one in red rubber and another in grey hand-stitched alligator.  It looks like that versatility is paying off, too. Chu announced via Instagram that the first timepiece has been auctioned to charity, hammering in at an impressive $300,000 (300,000 CHF). All proceeds will go towards environmental relief in China.

Chu was clearly elated by the opportunity to collaborate with Audemars Piguet. “From a little boy in grade school staring at a Royal Oak in a store window fantasizing about owning one day, to actually collaborating on the Audemars Piguet Royal Oak China Limited Edition is simply a dream come true,” he shared. “Not only is this the first fully titanium Royal Oak Perpetual Calendar ever made, but it is also amongst the lightest Royal Oak’s ever made.”